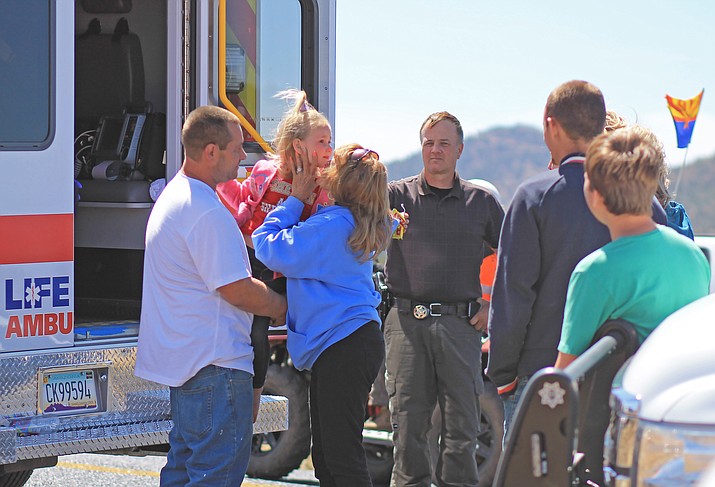 Searchers gather for a debriefing after Kaylee Cook was found April 29.

A game of hide-and-seek led to a 16-hour overnight adventure in the pinon-junipers north of Williams for a four-year-old girl Saturday night.

Kaylee Cook, from Riverside, California, was last seen at 6 p.m. April 28 playing in the backyard of her grandparent’s home on North Perrin Lane, 10 miles north of Williams, when her family discovered she was missing.

Kaylee Cook waves to the search and rescue personnel who looked for her throughout the night.

“She was playing hide-and-seek and then she just vanished,” said Kaylee’s grandmother Betty Capotosto. “She was with her brother and he walked off and thought she was right behind him but when he turned around she wasn’t there.” 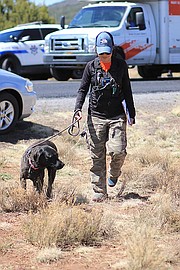 Over 80 personnel, several dogs and two aircraft searched for Kaylee.

After a quick search, family members called 911 to report Kaylee missing. Officers from Coconino County Sheriff’s Office (CCSO) responded to the residence and began organizing a search for the little girl.

“We conducted a quick hasty search and had a lot of citizen volunteers and neighbors who responded out here,” said CCSO Commander Rex Gilliland.

Gilliland said officers and volunteers searched the neighborhood throughout the night without success.

“We did have quite a bit of flight time from Arizona Department of Public Safety helicopter out of Flagstaff and Kingman,” he said.

The Sheriff’s Office was assisted with 50 search teams on the ground that included search dogs and searchers on horseback. The department also had 10-12 ATVs searching the area with assistance from Yavapai County Search and Rescue.

“We asked for assistance from Yavapai County, who sent 40 personnel up,” said CCSO Lieutenant Brian Tozer

Around 10:30 a.m., Cook was found following a tip by a local resident. A CCSO officer and volunteers Cameron and Devin Maebe found Cook when she came out of the trees near Buckridge and Espee Roads.

“She is in excellent condition for being out overnight,” Tozer said. “In fact, she was in good spirits and told us she slept under a tree last night.”

Tozer said Cook was found just to the north of Junipine Estates on the north side of the roadway.

“We actually had a resident who had seen her in the Junipine Estates area but didn’t take note of it, because we have a lot of kids out there, until this morning when they heard it on the news,” Tozer said.

Searchers listen to CCSO officers during the debriefing.

Tozer said Cook walked out from the trees when she saw searchers and she was brought back to her family.

“As the crow flies she probably traveled a little over three miles,” Tozer said. “We haven’t mapped that out yet but she was quite a ways away.”

Cook was evaluated by paramedics and found to be mildly dehydrated but in otherwise fine health.

After reuniting with family members, Cook waved to searchers who applauded her before she was transported by ambulance for a full medical evaluation.

A DPS helicopter was used during the search.

“God was with her and an angel was on my shoulder,” Capotosto said.

Kaylee was found around 10 a.m. near Espee Road and Buckridge Road in the Junipine area of Williams by searchers. She was found nearly three miles from where she was last seen. Paramedics said she is healthy with some mild dehydration.

Deputies received a call about the missing child at about 6:40 p.m. on Saturday.

Deputies say Kaylee Cook disappeared from the front yard of a home that's about eight to ten miles north of Williams, Arizona.

Cook was last seen playing in front of the home, and it's believed she may have wandered off in the area of Highway 64.

She was last seen wearing blue jeans, a pink sweater, a red shirt and a black Uggs-style leather boots. Cook is described as weighing 40 pounds at three feet tall. She has brown eyes with blonde, shoulder length hair.

Search efforts involving family members, search and rescue teams, and fire crews had been underway all night long and were continuing on Sunday.