Vanessa Ceja-Cervantes, community and centennial outreach coordinator for the Grand Canyon National Park, said she had her name-tag changed to note that she is a Spanish speaker to help make visitors more comfortable approaching her for help in Spanish. (Photo by Jenna Miller/Cronkite News)

GRAND CANYON NATIONAL PARK — More than 6 million people visited the Grand Canyon last year, but only a tiny fraction were people of color.

A 2011 National Park Service report shows visitors to the national parks were mostly white. Just 9 percent were Hispanic, 7 percent were African American, 3 percent Asian and 1 percent were Native American, according to the report.

“We should be concerned because something is there keeping us from attending in the same numbers as the rest of the population,” said Xitlaly Reyes, ambassador for Latino Outdoors in Arizona. “There is definitely a message not getting across that that is their park — that they can enjoy it.”

The National Park Service is working to become more inclusive of racial and ethnic groups, said Vanessa Ceja-Cervantes, outreach coordinator at Grand Canyon National Park. The park's goal is to increase diversity of visitors and bring more people from different backgrounds to places like the Grand Canyon, but they are also trying to increase the diversity of their own staff, hoping that helps bring more people to the parks.

As of data from September 2015, the National Park Service had more than 23,000 employees, with 83 percent white, 6 percent black, 5 percent 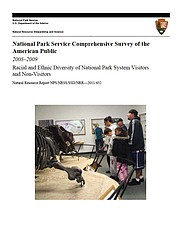 Hispanic and nearly 6 percent identified as Asian, Hawaiian or American Indian. Ceja-Cervantes said their goal is to increase that to better mirror the population of the U.S.

“I feel like we need to be very cognizant of the fact that we have increased diversity in our nation and that increasing diversity needs to be represented amongst the federal ranks,” Archuleta said.

“When you are here you get to experience more than just a picture, you know the pictures are beautiful, but being here you get the actual full experience and just the wow factor of everything,” said Lisa Brokenbrough, who was visiting with Doug Griffin.

The two, who are African-American, said the drive was worth it.

Grand Canyon officials are reaching out to diverse groups and encouraging them to visit the park. Ceja-Cervantes said park employees have participated in outdoor expos, conferences, and parades to increase the awareness of public lands.

“We need to do a lot of stuff within our park as well — that’s everything from making sure the staff looks like the American public, making sure that there’s visibility in our publications,” she said.

Ceja-Cervantes said park officials say increasing inclusivity is a long term effort, but hope that showcasing diversity in park brochures and other marketing materials will help as they get ready to celebrate the Grand Canyon park centennial.

The Grand Canyon is also reaching out to underrepresented communities, like attending events that would give them access to people not normally familiar with the park service and using radio stations as a way to communicate their message, Ceja-Cervantes said.

“Not everyone enjoys the outdoors the same way,” she said. “Someone might enjoy an eight-mile hike into the canyon while someone else might enjoy watching the wildlife hanging out with their family,” she said. “We’re taking all those things into consideration.”

She said it’s also important to show a friendly face at the Grand Canyon, having people available to answer questions.

“When I go out to a trail and I see someone, I see an Hispanic family, I get really excited,” said Ceja-Cervantes, who speaks Spanish.

A planned increase in entrance fees could affect diversity efforts.

“There’s no question about it, access to the parks will be affected as the price goes up,” said Kevin Dahl, an Arizona program coordinator for the National Parks Conservation Association.

Earlier this month, the park service announced that prices would go up about $5 at national parks that charge a fee. That’s less than a previous proposal that fees would be hiked to as high as $70 at some of the most popular parks during peak season.

“Every dollar more that it takes to get to a park excludes some people,” Dahl said.

The park service said they are raising fees to pay for repairs and maintenance costs that reach more than $11 billion.

“At the heart of the issue is that Congress is responsible for funding the operations and maintenance of our National Parks,” Dahl said. “Funding for parks has gone down, which is just incredible because visitation is at an all time high.”

“This is part of the treasure of our country,” Archuleta said. “That’s why it’s so important, especially for our multicultural families — to make sure that no one is left behind and that everyone can access our parks.”

She said the new fee increase is reasonable.