Uranium in Canyon Country: Who benefits from uranium mining? 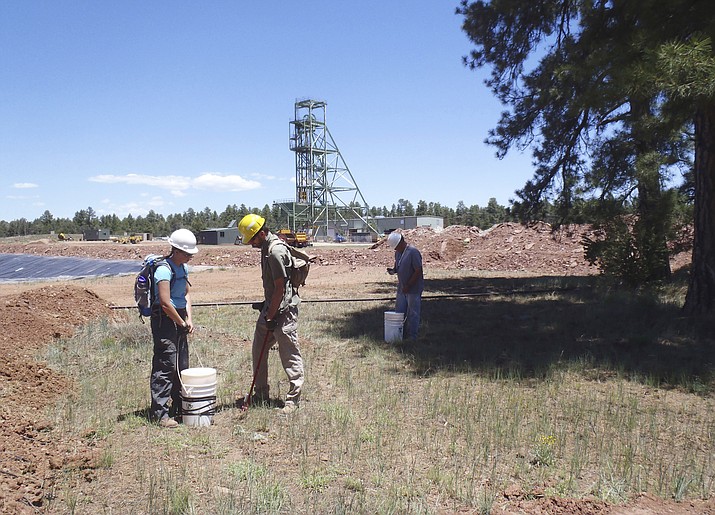 GRAND CANYON, Ariz. — There are currently 831 mining claims in the roughly 1 million acres withdrawn by former Interior Secretary in 2012, according to the Bureau of Land Management (BLM).

There may be a healthy profit to be made on the claims, as legal action by mining industry groups and a recommended review of the ban by the Forest Service seems to indicate. But who is making the profit?

The BLM’s report indicates that only a small percentage of the 831 mining claims are held by U.S.-based companies – those belong to Liberty Star Uranium and Metals in Tucson, Arizona, and Energy Fuels, Inc., based in Denver, Colorado. The rest, discounting privately-held claims (5 percent), belong to foreign-based companies. Of the remaining claims, companies based out of Canada – Metamin Enterprises and Anfield Resources Holding – hold 610 claims (74 percent) and a UK-based Vane Minerals holds 60 claims (7 percent).

Uranium production in the U.S. has not been a profitable enterprise since the bottom fell out of the uranium market in the early 1990s. According to the Energy Information Administration (EIA), there are currently 61 nuclear-based power plants in the U.S. — no new plants have been commissioned since the near-catastrophic incident at Pennsylvania’s Three Mile Island facility in 1979. The end of the Cold War in 1991 meant that proliferation of nuclear weapons was suspended, a pact that remains largely in place. As a result, demand for uranium fell sharply, prices bottomed out and uranium extraction became a pricey enterprise with low return on investment.

Production in other countries, however, has ramped up considerably in the past decades — nations like Russia, Kazakhstan and other former Soviet Block countries now account for just over half of the world’s uranium production. Canada is a distant second at around 22 percent. These countries also account for the lion’s share of uranium imported into the U.S. at more than 90 percent.

“More scrutiny should be given to … opening up the Grand Canyon to uranium mining, given that nearly all the mining claims around the canyon are currently held by foreign-controlled companies,” said Amber Reimondo, energy program director for Grand Canyon Trust.

In a petition filed with the U.S. Department of Commerce (DOC), Energy Fuels Inc., which carries a 12 percent stake in uranium mining claims around Grand Canyon, asserts that the commercial uranium stockpile was 6 percent higher than 2015 levels.

If demand is lower and supplies are higher, how do these companies plan to profit off increased mining activity?

In a 2017 executive order, the president ordered federal agencies to provide a list of programs that may hinder U.S. energy production for review. The Forest Service, which oversees the majority of the land around Grand Canyon National Park, recommended a review of the 2012 mineral withdrawal. While the Forest Service didn’t recommend its reversal, the ban’s inclusion could mean it’s on the chopping block.

In December 2016, the National Mining Association (NMA) filed a lawsuit in the U.S. Court of Appeals Ninth Circuit to lift the ban, alleging there was no evidence to suggest uranium mining harmed the environment. The court upheld the ban in December 2017. On March 9, the NMA joined the American Exploration and Mining Association in asking the U.S. Supreme Court to assess the constitutionality of the ban and reverse it. The high court has not said whether or not it will hear the case – if it declines, the Ninth Circuit’s decision stands.

Energy Fuels, Inc. recently filed a petition with the DOC for relief under Section 232 of the Trade Expansion Act of 1962. In simplest terms, the company is asking the administration to issue a buy American requirement by limiting uranium imports as a threat to national security. The premise is the same as the tariffs to be potentially imposed on steel and aluminum imports — to revive a U.S.-based industry by steeply taxing competitors or eliminating them altogether.

But Reimondo points out that uranium mining isn’t a strong economic driver in northern Arizona, and even if it was, the U.S. doesn’t reap any rewards. The government, which receives royalty payments from industries that extract minerals or other commodities from federal lands, doesn’t receive royalties from uranium mining.

Comparatively, the tourism and travel economy pumps more than 900 million into the region each year, and supports nearly 20,000 jobs, according to a joint 2011 report by the U.S. Geological Survey, U.S. Fish and Wildlife Service, National Park Service, Forest Service and BLM. The report also estimates that uranium mining could support only about 650 local jobs — and those jobs aren’t permanent. Once a mine is depleted, on-site jobs will evaporate. Energy Fuels says its Canyon Mine, which is currently permitted to operate near Red Butte about six miles from the South Rim, is expected to employ about 60 people at peak production.

“Mining does not drive our economy here,” said Coconino County Supervisor Art Babbott in an interview. “Access to public lands, that’s what is our important economic driver here.”