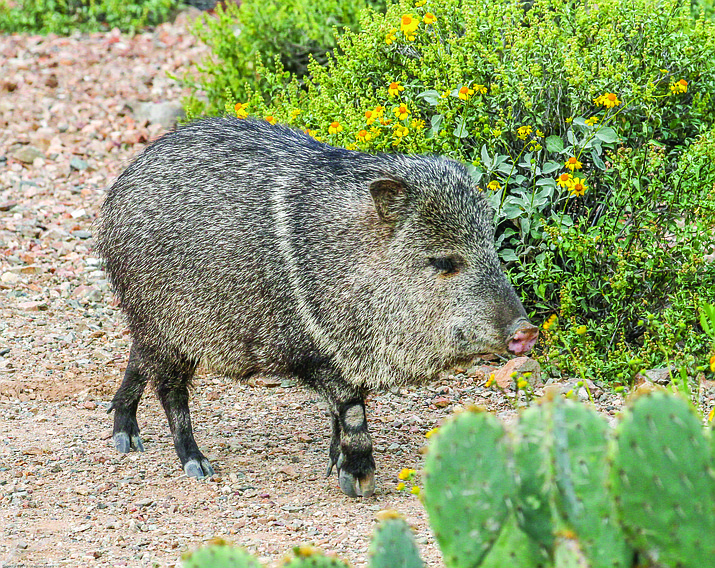 Javelinas can be found in small herds throughout Arizona. (Stock photo)

SEDONA, Ariz. — Following two javelina attacks near Sedona last month Arizona Game and Fish Department is reminding the public to stop feeding wildlife. No attacks have been reported in the Williams or Grand Canyon area.

Game and Fish said both attacks were the result of people feeding javelina at their homes.

On Feb. 5, the department received information that a 79-year-old woman was bitten by a javelina in a neighborhood southwest of Sedona. The attack occurred around 4 p.m. at the woman’s residence, where she received severe bite wounds to her leg as she tried to stop the javelina from attacking her dogs.

A responding Game and Fish wildlife officer confirmed the woman was intentionally feeding a herd of javelina at her home. The victim was treated in Sedona and released.

The second incident occurred Feb 25. The department received information that an elderly man was bitten by a javelina in Oak Creek Village as he was feeding a herd of javelina in his backyard. When food wasn’t provided quickly enough, one of the animals became aggressive and bit the man in the leg. He was treated at a local emergency room in Sedona and released. The victim has been going through the preventative rabies shot series.

Game and Fish said these incidents placed the department in a very difficult position where it had to act immediately and consequently contracted with the U.S. Department of Agriculture Wildlife Services to conduct lethal removal of the javelina within a quarter-mile radius of the victims’ residences.

The decision to lethally remove the animals was based on the attacks, an imminent public safety threat created by intentional feeding, the habituation and loss of fear to humans by the javelina, and a concern for possible rabies. A javelina tested positive for rabies in Sedona approximately eight months ago.

As wildlife are fed by people, they lose their natural fear of humans and become dependent on unnatural food sources.

The department is tasked with managing all wildlife in Arizona and working to ensure public safety. The department said it does not want to be in a position where it must decide to lethally remove wildlife due to irresponsible feeding.

Animals removed by USDA Wildlife Services have been sent to a laboratory for rabies testing. To date, test results received have been negative, some results are still pending.