Carol Glassburn, advocate for a better Williams, dies at 69 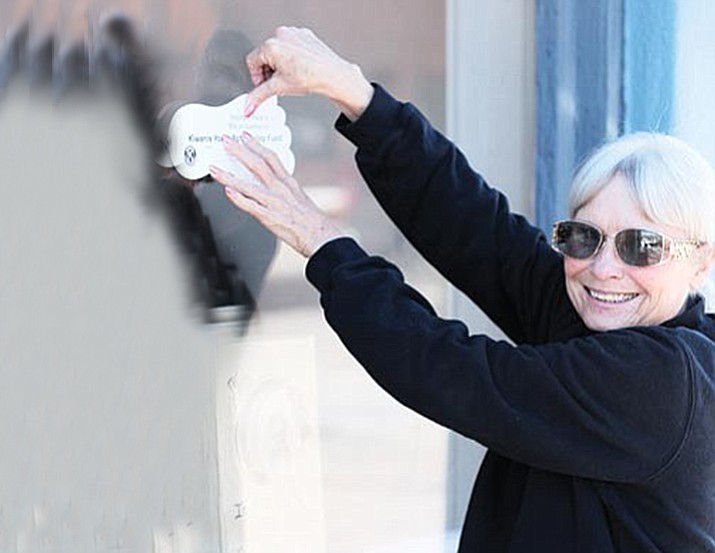 Search Carol Glassburn’s name in the Williams News archives and it doesn’t take long to realize the significant impact she had on the Williams community.

Many from the community gathered to say goodbye as she passed away in her home March 20. She was 69.

Whether it was raising funds for the Williams Memorial Park or pulling up weeds along Grand Canyon Boulevard, Glassburn tirelessly worked to improve the town she came to love over the past 30 years.

“For a very tiny little lady, she packed a punch,” said friend and co-volunteer Pimi Bennett. “She wanted nothing but the best for our community in everything she did.”

Heartfelt tributes have been rolling in from family, friends and acquaintances as news spread of Glassburn’s death.

Glassburn, who retired from Kaibab National Forest and devoted her retirement to volunteer for the city of Williams, was instrumental in beautifying the downtown streets and raising money for the various needs of the community.

Her service efforts culminated to earn her a lifetime achievement award from Gov. Doug Ducey in November 2017.

The list of accomplishments and organizations she was involved with over the years is staggering.

Glassburn had been active in Kiwanis since 1991, and in 2016 received the ‘Kiwanian of the Century’ award. For over 13 years she served as the chairperson for the Kiwanis Community Holiday Dinner.

She also co-chaired the Kiwanis children’s pajamas/books donation program and collected hundreds of children's book and pajamas for the community.

For over 25 years, Glassburn served as a board member for the Williams-Grand Canyon Chamber of Commerce and founded and served as chairperson for the Ambassador Volunteer. In 1996, she received the Arizona Chamber Executives Outstanding Volunteer of the Year Award for the state of Arizona.

Glassburn served as chairperson for the Williams Parks and Recreation commission and served as a commissioner for Coconino County Parks and Recreation during which time she helped obtain funding for a $2 million upgrade for Cataract Lake Park that, was constructed in 2012, which included ramadas, restrooms, fishing docks, a playground, additional parking and walking paths.

As a member of the Williams Rotary Club and the Williams Kiwanis Club Glassburn rallied support for a town clock on the corner of Grand Canyon Boulevard and Railroad Avenue. She also was a driving force behind the construction of the veteran’s Monument Park.

She also joined the American Legion Auxiliary and was part of the Salvation Army Red Kettle Campaign for many years.

In 2005, Glassburn formed a non-profit corporation — Williams Needs an Angel Committee to address the needs of the people of Williams. Through that group, $200,000 in donations were collected to build a new playground for the Williams Elementary-Middle School and the children of the community, and several thousand dollars were raised for the Friends of the Williams Aquatic Center to keep the swimming pool open.

The committee also hosted an auction and raised $15,000 for the families of five local youth killed in a car accident in 2007.

With Glassburn’s forest service experience, she continued to volunteer as a fire instructor for Arizona Wildfire Academy in Prescott and other rural Arizona fire departments in her retirement.

One of Glassburn’s most endearing projects was the creation of Williams Clean and Beautiful, which she served as chairman of for over 24 years. The group continues to host two clean-up days in Williams each year and has collected several tons of waste and recyclables.

“Carol and I worked a lot with the same passion to clean the town up,” said Mayor John Moore. “She meant so much to the community with her volunteer service. With Carol’s passing, my plan is to continue her legacy to restore and beautify Williams.”

Glassburn saw the importance of serving the community by participating in several committees, including the Northern Arizona Council of Governments, APS Focused Future, the Forest Service Travel Management Plan, the Williams Cemetery, the Williams Food Bank and Main Street America.

“I have found that often in order to get things done you need a champion that has passion and a good heart, wants to do the right thing, is resilient and persistent, and often is good at getting others involved,” said Coconino County Supervisor Matt Ryan. “Carol Glassburn was all of these things and so much more.”

No matter the event, Glassburn could often be seen participating if it was a benefit to the community. She was often seen leading and organizing Williams’ downtown parades.

“She did it for the love of this community,” Bennett said. “Her love of Williams, it was that passion.”

Glassburn spent years raising money to build a downtown park on Railroad Avenue in Williams. She hosted fundraisers and rallied her friends to develop the vacant, weedy land on the east end of town.

In 2006, the city cleared the area to create pocket parks, railroad displays, train cars, armadas, interpretive displays, a parking lot and landscaping, and friends and colleagues honored Glassburn by dedicating the park in her name.

As the red leaf maple tree begins to leaf out at the park, Glassburn’s friends say it is a fitting reminder of how she desired to renew and restore the city of Williams.

"If heaven was a town, it would be Williams,” she is remembered as saying.