Yavapai County Sheriff’s Office K9, Vader sits with nearly $1 million worth of drugs after a deputy made a traffic stop for an equipment violation March 12, near Ash Fork. After Vader completed an external sniff of the vehicle and alerted the deputy, 47.5 pounds of cocaine and 27.5 pounds of marijuana were discovered. (YCSO/Courtesy) 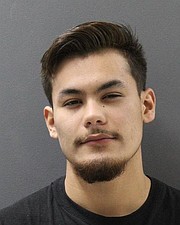 ASH FORK, Ariz. — A man was arrested on Interstate 40 near Ash Fork March 12, after a Yavapai County Sheriff’s deputy stopped him for an equipment violation and found nearly 75 pounds of illegal drugs in his car, worth about a million dollars on the street, according to YCSO spokesman Dwight D’Evelyn.

At around 7 a.m., a deputy pulled over 20-year-old Eduardo Pedro Martinez, from Texas, and Martinez initially refused to comply with the deputy’s order to get out of the car, D’Evelyn said.

An external sniff of the car by a K9 resulted in an alert that allowed deputies to search it after which they located approximately 47.5 pounds of cocaine and 27.5 pounds of marijuana.

Martinez was booked into the Camp Verde jail and remains in custody on a $750,000 bond.

Earlier this year, on Feb. 6, a Yavapai County Sheriff’s K9 deputy canine was used to sniff out drugs during a traffic stop on I-40 near Ash Fork. Two people were arrested – one of the individuals was hiding drugs in his body.

Juan Requejo, 29, from New Mexico, and Brittnee Sorenson, 27, from California, were arrested on charges including drugs, fraud and vehicle theft.

During a search of the vehicle to locate the source of the marijuana odor, deputies found balloons, indicating the the suspects may have been hiding drugs in their bodies.

When confronted, Requejo admitted he had hidden meth in his body and 12 grams of meth, contained in a black balloon, were recovered, D’Evelyn said. Requejo apparently hid the drugs during the time he refused to pull over after the deputy initially attempted to stop him.

Over 30 pounds of drugs seized on I-40 near Ash Fork
Over $1 million in cocaine, heroin seized in I-40 traffic stop
Sheriff K9 team nabs 136 pounds of marijuana, stolen guns
K9 deputies discover nearly 100 pounds of marijuana hidden in truck
K9 team makes drug and weapons arrest on I-40
Event Calendar