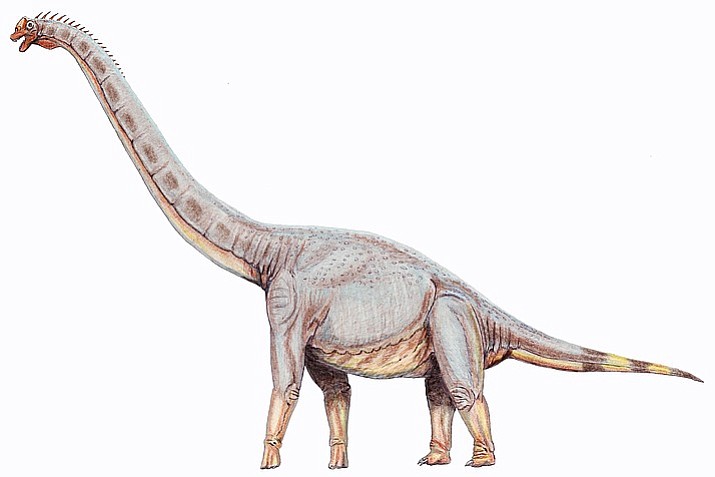 Members of the House Government Committee unanimously endorsed the designation of the Sonorasaurus as the "official state dinosaur.'' That sends SB 1517, which already has been approved by the Senate, to the full House. (Wikicommons)

PHOENIX - A 27-foot-tall dinosaur could soon have something in common with the cactus wren, the palo verde and even the Colt single action revolver: becoming part of "official'' Arizona.

Members of the House Government Committee March 8 gave their unanimous endorsement to the pleas of 11-year-old Jax Weldon to designate the Sonorasaurus as the "official state dinosaur.'' That sends SB 1517, which already has been approved by the Senate, to the full House.

Weldon, a self-proclaimed amateur paleontologist, told lawmakers he was inspired after California lawmakers voted last year to select the Augustynolophus as its official state dinosaur. His research, he said, led him to the Sonorasaurus.

The "why'' behind that choice is a bit more complex.

There's the sheer size of the enormous creatures, getting as tall as 27 feet and up to 49 feet long. That size allowed the vegetarian to graze in the treetops that other animals of its time could not reach.

It also lived in what is now Arizona, though at the time the climate and topography was vastly different than it is now.

And then there's the fact that the huge creature was featured in "Jurassic Park.''

"I would not choose any other dinosaurs because they either are not relevant enough or not very well understood,'' Weldon said. And he said he did not want to choose a dinosaur that might already be the official selection of some other state.

Colors -- Blue and old gold, with blue the same as U.S. flag

Flower -- The white waxy flower of the saguaro

Weldon told lawmakers his interest in dinosaurs dates to when he was just 2.

"I think there was this little tiny globe that my parents had bought,'' he said. "When you pressed it in a certain area it would say the name of a dinosaur and then it would like roar or something.''

If the bill becomes law, it would add Sonorasaurus to an ever-growing list of official state items.

Some are quite familiar, like the bloom of the giant saguaro as the state flower, the two-tailed swallowtail as the state butterfly, or even the bola tie as official state neckwear.

Some of the choices have been more controversial, like the 2011 vote to declare the Colt single action Army revolver to be the official state firearm.

Albert Hale, then a state representative from Window Rock, objected to providing official state recognition to "an instrument of destruction.'' And Hale, a Navajo, said his people were all too often on the wrong end of that weapon.

"Does that mean we honor and celebrate the killing of my relatives?'' he asked.

And controversy could be lurking in the wings even on this to designate the Sonorasaurus as the state dinosaur.

Two decades ago John Huppenthal, then a state senator, pushed a proposal by a 9-yearold boy to give that designation to the Dilophosaurus, a 20-foot-long dinosaur whose remains were discovered in 1940 near Tuba City.

That ran into opposition from volunteers from the Arizona-Sonora Desert Museum in Tucson who argued that the bones were spirited away by paleontologists from the University of California Berkeley. But they had their own suggestion, that being the Sonorasaurus whose remains were being excavated at the time by Arizona paleontologists near Sonoita with plans to put them on display at the Tucson museum.

An attempt at compromise to name both ultimately faltered. And, in the end, neither prehistoric creature gained the designation.

And, as it turns out, there could still be other pretenders even today to giving the state's official blessing to the Sonorasaurus.

The Museum of Northern Arizona has its own potential entry, the Therizinosaur, whose bones are on display at that facility. And while it was unearthed in southern Utah, there is a belief it probably roamed further south across the Colorado Plateau.