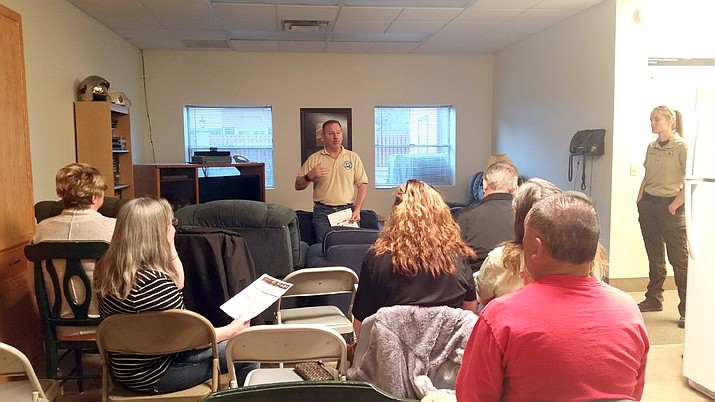 Jon Paxton and Alexandra McArthur, who serve as community deputies for the area, were on hand to introduce themselves, discuss the department’s new Ready, Set, Go! emergency preparedness program and try to answer any resident questions or concerns.

The deputies stressed that residents should report any behavior they find suspicious, even if their first instinct might be to dismiss it or assume someone else has notified authorities.

“If you see something out of the ordinary, just give us a call and let us know,” McArthur said. “If there’s a guy walking around camper village in a black hoodie not making eye contact with anyone, that’s suspicious. If a car peels out of a parking lot at a high rate of speed, that’s suspicious. Don’t hesitate to call us thinking we may not respond in time — I might be right around the corner.”

For occasions when she’s not right around the corner, McArthur said all law enforcement officers in the area help each other out, including the NPS law enforcement rangers and the Department of Public Safety (DPS).

McArthur said if she’s unable to get to the location, she can call on rangers or DPS trooper Shaun Shields, who lives in the area.

The deputies also stressed that a non-emergency line is available for reporting concerns, such as a vehicle continuously speeding through a residential area, but should residents feel unsafe or see something like a wildfire to call 9-1-1 immediately.

McArthur and fire department assistant Chrystal Schoppmann also emphasized calling the fire department immediately in case of a a wildland fire or an abandoned campfire — don’t assume that someone is coming back to the campsite or that another witness has already contacted authorities about a fire. Schoppmann said between the department and the Forest Service, about a dozen unattended campfires had to be extinguished last year.

Fire Chief Greg Brush said although it’s early, the fire season has already begun this year with a fire caused by a crashed drone on Kendrick Peak near Flagstaff. Brush said the department is available to assist residents with safeguarding their homes against wildland fires. Precautions include clearing gutters of pine needles and debris, storing woodpiles away from the walls of the home and having chimneys cleaned at least once per year.

Because the threat of a wildland fire looms large in an abnormally dry, warm year, Paxton introduced the department’s Ready, Set, Go! program. The program is designed to help residents prepare in advance for an emergency situation that may require evacuation.

“The sheriffs of Arizona have partnered with the fire community and emergency management to provide information to help the public and our communities prepare for situations that could result in evacuations,” said Sheriff Jim Driscoll in a news release.

The program prompts residents to prepare for the possibility that a threat, such as a fire, much cause the area to be evacuated. Paxton said preparing what he calls a “go bag” can be invaluable in case of an emergency.

“It’s important to have items in a bag and ready to go so you can just pick it up and walk out the door,” he said.

Paxton recommends having important files, such as passports, driver’s licenses, mortgages and other important papers backed up on a flash drive in the bag. He also said it’s a good idea to follow the five P’s: people and pet supplies, prescriptions, papers, personal needs and priceless items.

It’s also important to sign up for the Coconino County Code Red alert system, which will send an automated message to cell phone numbers you provide in the event of an emergency. Paxton said numbers provided are secure and will only receive alerts from their immediate area.

The program recommends voluntarily relocating to an unaffected area with relatives or friends if there is a significant threat. Should the threat become an imminent danger, law enforcement personnel will begin evacuating the area, and residents should be prepared to leave. Paxton said the department can’t force you to leave, but strongly recommends evacuating before it’s too late.

Neighborhood watch meetings will be held at Tusayan Fire Department every second Thursday of the month at 5:30 p.m. Community members are encouraged to attend.