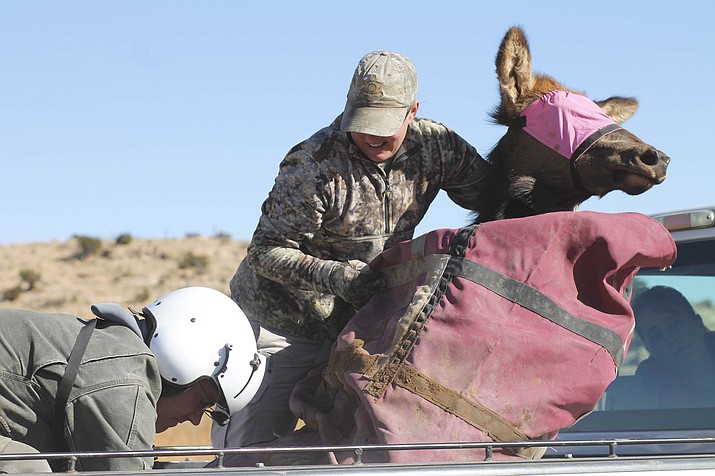 Game and fish managers capture elk at Raymond Wildlife Area Jan. 23. The 60 elk were delivered to West Virginia this week after being quarantined.

For the first time in more than 150 years, elk are leaving their hoofprints on West Virginia soil.

On March 3, dozens of elk that were captured and quarantined in January east of Flagstaff were loaded into a livestock trailer and transported nonstop to a release site in the Tomblin Wildlife Management Area in southwest West Virginia.

A native species, elk disappeared from West Virginia’s landscape when the last documented animal was killed in the Mountain State around 1875 — 10 years after the end of the Civil War.

In a letter of appreciation dated Feb. 14, West Virginia Gov. Jim Justice thanked commission members and the department’s director, Ty Gray, as well as department staff and volunteers, for their leadership, professionalism and hospitality. Justice added: “Through this restoration project program, we anticipate our state will soon support a viable, self-sustaining elk population that provides opportunities for wildlife viewing, hunting and economic benefits to our local communities.”

The conservation project marks only the second time Arizona has provided elk to another state. In 2000, Kentucky’s elk restoration efforts received a boost with 26 animals that were captured near the Raymond Wildlife Area. After a brief quarantine period, the elk that were delivered this week to West Virginia will join nearly two dozen more that were received in 2016 from Kentucky.

Arizona benefited from the same kind of out-of-state generosity in February 1913. In an effort to re-establish an elk population, sportsmen released 83 elk from Yellowstone National Park into Cabin Draw near Chevelon Creek in Game Management Unit 4A, just east of where the capture took place in January.

Two other transplants of elk from Yellowstone — one south of Alpine and another north of Williams — were considered successes, as Arizona’s elk population today numbers about 45,000 post-hunt adults.