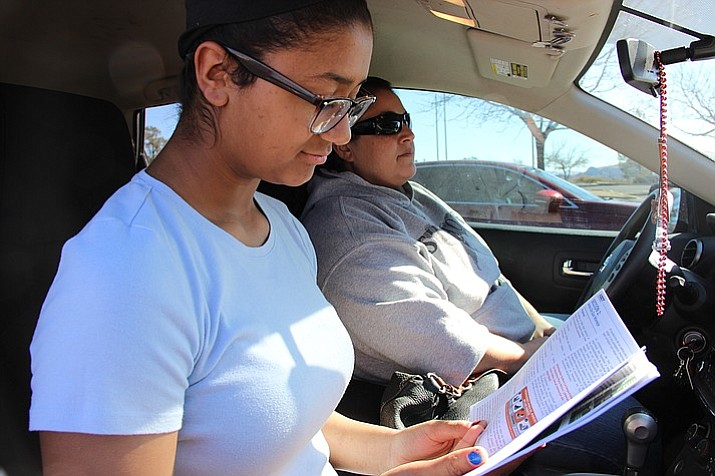 Audrey Gunn, at left, reviews an Arizona Driver License Manual outside the Motor Vehicle Department in Prescott after failing the test there, on her first attempt. Audrey’s mother, Rachel (in the driver's seat), pulled Audrey out of school Thursday, March 1, so Audrey could take the test in person at the MVD office. On Monday, March 5, Arizona began allowing the driving learner's permit test to be taken online. (Photo by Max Efrein/Courier)

WILLIAMS, Ariz. — As the world moves ever more online, so does the Arizona Department of Transportation Motor Vehicle Division (MVD).

Except this time, it’s not the basic service of requesting a replacement driver license or having a vehicle registration renewed, it’s the written driver’s test every new driver has to pass before receiving his or her learner’s permit.

Starting March 5, those at least 15 years and 6 months old can go to ServiceArizona.com and take the Permit Test @ Home in the comfort of their residences at any time of the day with the supervision of their parents. As with the in-person test, if they get at least 24 of the 30 questions on the test correct, then they are officially considered a first-time driver.

Douglas Nick, ADOT’s Assistant Communications Director for Customer Outreach, said this new online offering is not only an added convenience for MVD customers, but will also help the state agency to further its ambition to cut down on wait times at MVD locations.

“So much of what the economy is based on is online commerce now and people are used to doing things online and that’s rapidly growing, and there’s no reason that government can’t respond in the same way when it’s technologically feasible to do so,” Nick said.

Rachel Gunn, a mother of five whose youngest took the written driver’s test in person, March 1 at the Prescott MVD location, said while she understands the convenience factor, she’s not so sure this is a wise move when considering the safety of Arizona drivers.

“I don't think I like that too much,” she said.

Her concern is that there are parents who won’t take the written driver’s test seriously enough and simply let their children cheat on the test to get it over with.

Nick looks at it differently.

“The whole exercise is basically a reminder that it’s a learner’s permit,” he said. “If you’re a learner’s permit holder, you’re going to drive with a licensed driver in the front seat with you. More often than not, that’s going to be a parent, and that parent is the one who is going to be proctoring the test, so that parent has a real strong motivation to want the teenager to take that test seriously.”

Additionally, a new driver still has to pass a road skills test to obtain a full-fledged driver’s license, so the written driver’s test “is just one relatively small part of an entire learning process of how to be a driver,” Nick said.

While Gunn wasn’t too thrilled about the news, her second youngest daughter, Kyah — who just obtained her unrestricted driver’s license — liked the idea of an online written test.

“I wish I could have done it online,” said Kyah, who had to take the written test three times before passing. All three of those times Gunn drove Kyah to and from the MVD without complaint. To her, it’s a rite of passage for her children.

“For my kids, they knew this is an earned experience,” Gunn said.

And though her youngest, Audrey, will have to take the written test again after failing her first attempt on Thursday, Gunn said she will likely opt to bring Audrey into the office again rather than use the new online service.

“I think it’s just better to come in,” Gunn said.

As with the in-person written test, the Permit Test @ Home requires a $7 application fee and new drivers have three attempts to pass the test within 12 months.

The parent or guardian of the new driver is required to register their teenager for the test by setting up a free personal AZ MVD Now account and agree to the terms of the test-taking process. More information is available or to access online practice tests visit servicearizona.com.