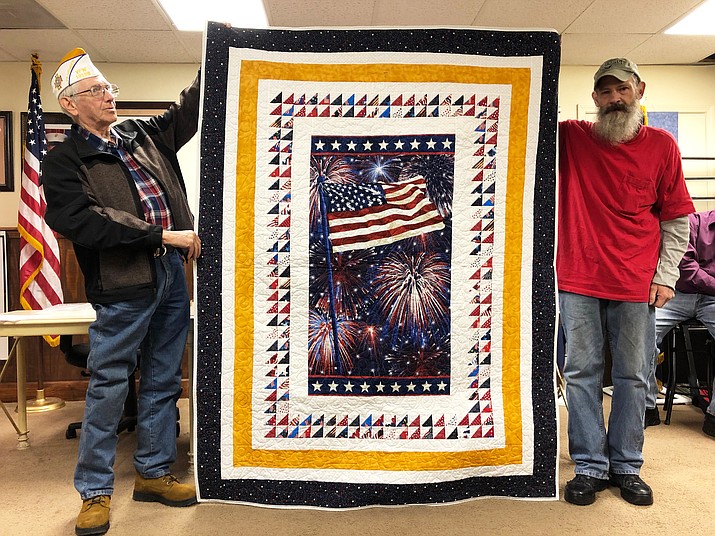 Paul Sanger (right), a U.S. Air Force veteran from Williams was honored March 2 with a quilt by the Quilt of Valor Foundation. (Wendy Howell/WGCN)

Paul Sanger, a U.S. Air Force veteran from Williams, Arizona, was honored for his service by the Quilts of Valor Foundation March 2 at the Williams VFW post.

Sanger was presented his quilt by Ruth Ordonez with Quilts of Valor. Each year, the organization bestows quilts to veterans ‘to cover all those service members and veterans wounded physically or psychologically with comforting and healing Quilts of Valor,’ according to their website.

The Quilts of Valor Foundation was started in 2003 by Catherine Roberts, whose son, Nat, was deployed in Iraq. The first quilt was awarded in November 2003 at Walter Reed Army Medical Center to a young soldier from Minnesota who had lost his leg in Iraq. More than 182,257 quilts have been given to veterans since 2003.

Sanger joined the U.S. Air Force in 1980. He went to Lackland Air Force Base in San Antonio, Texas for Basic Training and on July 6, 1981 he went to Sheppard Air Force Base in Wichita Falls, Texas for General Aviation School to become an Aircraft Maintenance Specialist (431X1). He was ranked in the top 10 of his graduating class.

Sanger went to Homestead Air Force Base in Homestead, Florida where he was taught how to maintain the F-4 Phantom II aircraft. He was an honor graduate of his class. He was stationed at Spangdahlem Air Base in Spangdahlem, Germany in December 1981. He had just turned 17 years old. While there, he had an extended tour with the 52nd Tactical Fighter Wing, 781st Wild Weasels.

“We operated at forward bases to destroy ground radar sites and surface to Air Missile Launchers,” he said. “I made Senior Airman my second year on base and sergeant one year later. I was given my own aircraft to be acting Crew Chief in that same year (1984).”

Sanger’s aircraft was a McDonnell Douglas F-4G Wild Weasel. He later went on temporary duty at bases across Europe.

“We supported Desert Storm from Incirlik Air Base in Turkey and Shaikh Isa Air Base in Bahrain,” Sanger said. “I was at Incirlik for our aircraft to fly SEAD Rollback, which is Suppression of Enemy Air Defences. We also supported this mission at Shaikh Isa AB, which set up Desert Shield.”