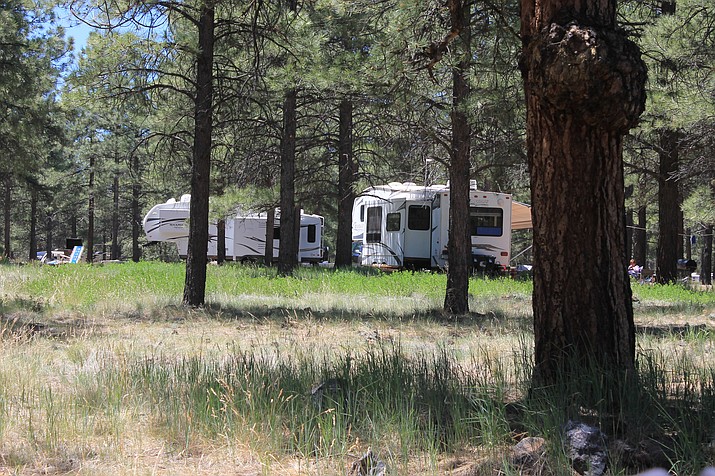 As the winter season comes to a close, area campgrounds are anticipating a busy summer camping season.

Winter campers and forward reservations are up at KOA campgrounds in northern Arizona, which bodes well for the 2018 camping season.

“We’ve seen a nice uptick in all three of our Arizona parks, which suggests we could have a strong summer,” said Clint Bell, whose family business Kampgrounds Enterprises, Inc (KEI) owns the Flagstaff KOA Holiday as well as two campgrounds in Williams, the Grand Canyon/Williams KOA Journey and the Williams/Circle Pines KOA Holiday.

They attribute the increase in business as being fueled by rising visitation to the Grand Canyon and other parks across northern California.

Visitation to the Grand Canyon reached an all-time high of 5,969,811 in 2016, according to the latest statistics from the National Park Service. Visitation to neighboring Wupatki National Monument was 223,172 in 2016, not a record, but one of its busier years.

There were 3,364 visitors to Wupatki National Monument in January of this year, a 45 percent increase from the same period in 2017, according to NPS statistics.

The KEI team has been making consistent improvements to their campgrounds in recent years in an effort to attract more campers.

In 2016, KEI acquired the 150+ site Williams/Circle Pines KOA in Williams and updated the camp store and laundry room. Additional upgrades include reconfiguring some of the park’s campsites to make them more accessible to large RVs. Seven tipis were added last year and four glamping-style Eco Tents from Eco Structures Australia will be added to meet accommodation demands.

Their long-range plans also call for installing the Eco Tents as rental units at the 100 site Grand Canyon KOA.

Bell said the Williams/Grand Canyon KOA Journey which is located along State Route 64, caters to overnight travelers, while the Williams/Circle Pines KOA Holiday, located along Interstate 40, has more on site amenities and is a destination designed to accommodate guests who would like to spend several days exploring attractions in Williams as well as the South Rim of the Grand Canyon.

The difference in the KOA campgrounds is in the amenities. Both parks offer RV and tent sites and rental accommodations, as well as bike rentals, mining sluices, cable TV, a snack bar and breakfasts between Memorial Day and Labor Day.