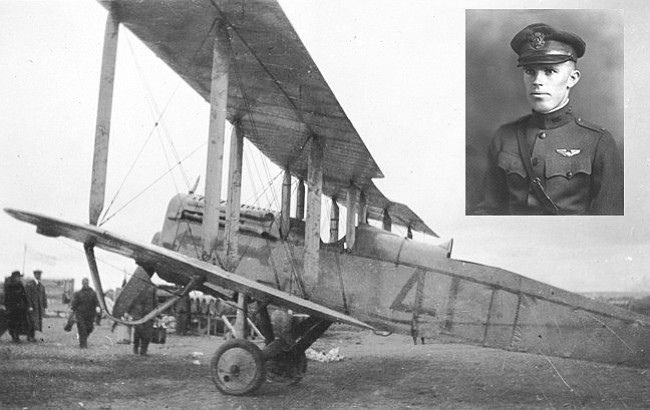 Lieutenant Alexander Pearson flew a de Havilland DH-4 plane for survey flights at the Grand Canyon in 1921. Pearson used the Williams airfield as his base. (National Park Service)

The June 10, 1921 edition of the Williams News announces the arrival of Lieutenant Alexander Pearson, who made historic survey flights at the Grand Canyon and northern Arizona. (Wendy Howell/WGCN)

In the years after war, countries worked to push the boundaries of what aircraft could do. In the United States, Americans broke the altitude record by reaching 33,114 feet. Air Service planes flew from New York to Nome, Alaska and back. Americans set new speed records in the Pulitzer race on Thanksgiving Day, and Grand Canyon National Park was surveyed by aircraft for the first time.

Lieutenant Alexander Pearson was a famed aviator who was known for his speed records, stunt flying and historic survey flights at the Grand Canyon. (National Park Service)

Lieutenant Alexander Pearson became a pilot in the United States Air Service in 1917. During the war, he was a flight instructor for various air fields for the military. After the war, as most squadron members left the Air Service and returned to civilian life, Pearson stayed with the Air Service and became a highly accomplished aviator.

The 1920s was the introduction of barnstorming, during which pilots went from town to town demonstrating their piloting skills. Air Service pilots and mechanics were encouraged to engage in barnstorming and air races to help aircraft manufacturers recognize the flaws in their own designs and learn from each other.

In October 1918, Pearson entered the first transcontinental air race that took off from Roosevelt Field in Long Island, New York and ended at Crissy Field in San Francisco.

The race had 100 entrants — 50 began in New York and 50 began in San Francisco. The race only included Army pilots, recommended by their commanding officers, who all flew de Havilland DH-4 aircraft.

Using a Rand McNally Railroad map as a guide, Pearson recorded the fastest actual time, and in turn a world record. He crossed the continent twice in 40 hours. He won a Thermos bottle, a leather flying suit and $825 of liberty bonds.

Pearson was stationed with the 12th Observation Flying Squadron in Douglas, Arizona. There he was utilized by the U.S. Army Border Air Patrol to fly along border between the United States and Mexico to watch for bandits and cattle rustlers.

In 1920, Pearson became famous when he was involved in an aviation incident along the U.S. — Mexico border. Pearson had been traveling to Florida for a transcontinental flight from Jacksonville to San Diego, California. His de Havilland DH-4 began having engine trouble and he was forced to land in the shrub and rocks near the Rio Grande River.

Being resourceful, Pearson gathered the engine water, once it had cooled, and began traversing the rocky terrain of south Texas.

A large search ensued, with 65 planes searching the ground for the aviator, and most people feared Pearson had perished in a crash. However, Pearson emerged several days later and reported that beaver trappers with burros helped him ride out of a canyon to a ranch where he eventually made his way to Sanderson, Texas.

Searchers eventually found his plane, repaired it, constructed a runway and returned the plane to San Antonio, Texas.

Pearson’s de Havilland DH-4 plane was used during his 1919 transcontinental race and for survey flights at the Grand Canyon. (National Park Service)

In May 1921, Pearson was commissioned to survey the Grand Canyon for possible commercial air travel and mail service. He was to locate landing fields and make observations about air conditions for mail and passenger services between the Union Pacific Railroad in Utah and the Santa Fe Railroad in Arizona.

According to the June 10, 1921 edition of The Williams News, Pearson surveyed northern Arizona for a suitable location to be a base for his surveys. After looking at several airfields in the area, he chose the Williams field as the best field for his purposes.

According to The News, “Arrangements were made for landing at the east side of the field (the old Fair ground). The straightaway was lengthened by taking down the fence at the south of Ed Hoffmeyer’s ranch.”

Brush had to be cleared away from the east side of the oval race track. Gas and oil were available to Pearson and this field remained the official landing site for Williams until Webber Field was built in 1925.

The News reported, “This field, so Mr. Pearson states, offers the best opportunity for landing and taking off, of all the prospective fields in northern Arizona, that he has viewed.”

According to Arizona aviation historian Ruth Reinhold, Flagstaff landing strips at that time were in poorer condition than the Williams fairground track. They were small, surrounded by trees and usually muddy. The poor field conditions, the high altitude and unpredictable weather kept pilots from wanting to land in Flagstaff.

The Williams News said airmen had formerly flown near the rim of the Grand Canyon, but Pearson’s attempt to fly across and descend into the Canyon would be a first.

Pearson was inundated with tales of how dangerous flying over the Canyon could be. He was told of the hazardous storms and air currents and was “Almost scared to death of the job that has been assigned to him.”

On June 4, Pearson arrived at the Grand Canyon and met with the park’s superintendent. They evaluated possible landing sites near the rim, but the dense forest pushed the best site back 11 miles from the rim. He did find a possible emergency landing strip near the Anita Mine, along the railway.

Pearson returned to Nogales, but headed back north June 9 and landed in Williams and spent several weeks flying around the Canyon and northern Arizona. Williams became his base for his Grand Canyon surveys as he inspected Cataract Canyon and as far west as Seligman. He also circled over Flagstaff, the San Francisco Peaks and north over the Grand Canyon.

Pearson reported that flying over the Grand Canyon was better than he imagined. He reported good conditions and is believed to be the first person to cross the canyon, land on the North Rim and return.

According to Reinhold, Pearson even landed at a small airstrip cleared for him at Indian Garden below the Bright Angel Trail in the Canyon.

Until his historic flights, people assumed flying over the Canyon was too dangerous because of the “tempestuous air currents tumbling into and out of the canyon.” People also believed there was a “danger of being dashed against the upstanding pillars and peak of the canyon,” and “It was impossible to take off from a landing of 9,000 feet above sea level.” He proved all of this was possible in his survey flights.

In total, Pearson made 14 flights with a total of 22 hours of flying. He reported many findings, including his recommendation that air fields be at least two miles from the rim because of turbulence from the Canyon’s air currents. He suggested using the air strip at the Anita Mine and using vehicles to haul passengers to the park.

Life after the surveys

After finishing his surveys, Pearson returned to Douglas, where he married Margaret Shannon and honeymooned at the Grand Canyon.

Alexander Pearson was killed flying this Curtiss R-8 Navy plane at the Pulitzer Race at Wilbur Wright Field in September 1924.

In 1922, Pearson completed another transcontinental trip from Fort Bliss to Portland, Oregon, which he completed in 29 hours.

Pearson was involved in several mishaps and crashes during his aviation career like many pilots during this time in aviation history. He was forced to land on a highway north of Roswell, New Mexico with carburetor trouble in 1922. He had another crash near Ft. Bliss with a propeller malfunction. That same year, he also was forced down in a windstorm west of El Paso.

Pearson went on to participate in stunt fairs and air shows, and attended numerous celebrations to display his aircraft. He broke several speed records and became famed as a stunt flyer.

On Sept. 2, 1924, Pearson was making test flights for the Pulitzer Race at Wilbur Wright Field when he died in an airplane crash. He was flying a Curtiss R-8 Navy racing plane at 200 mph when a strut failed and the plane’s wings collapsed.

An airfield in Vancouver, Washington was designated Pearson Field in May 1925. The dedication included an air show with over 52 planes and 20,000 people in attendance. The field is currently a municipal airport for the city of Vancouver and is one of the oldest operating airfields in the United States. A museum is dedicated to Pearson at Fort Vancouver National Historic Site.