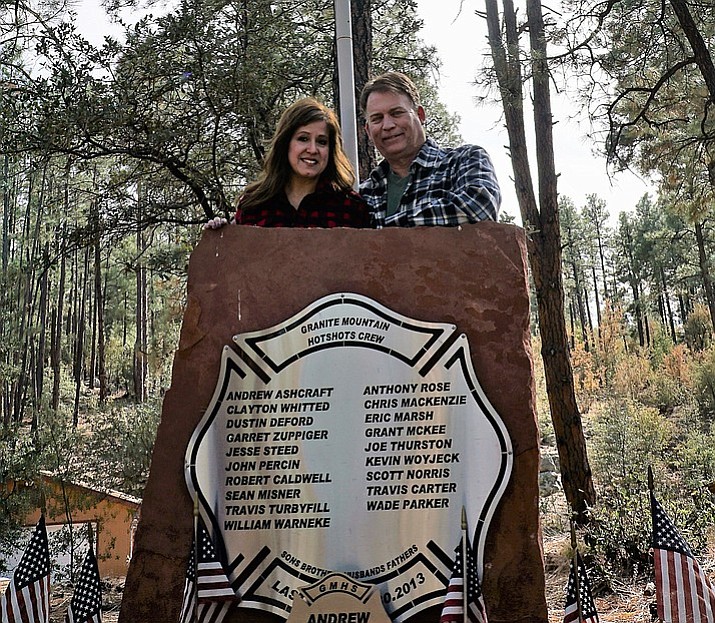 Jenn Winters-Ashcraft and Tom Ashcraft have honored Tom’s son, Andrew, and the other fallen Granite Mountain Hotshots with a memorial at their home located off White Spar Road. (Cindy Barks/Prescott Courier)

Bobby Woyjeck, the brother of fallen Hotshot Kevin Woyjeck, describes trying to work through the grief. “They all say time is the only healer … but how much time?” he wrote recently. “Is a year enough? What about two? Maybe five? They all say it, that blanket statement stuffed full of remorse and sympathy, but no one ever has the answer you’re looking for.”

The Woyjecks worked to get the Hotshot transport buggies into the County of Los Angeles Fire Museum. (Courtesy)

Still, somewhere along the way, many of the family members turned that great sorrow into action, forming a diverse collection of Hotshot-related foundations, memorials, learning centers, events, and institutes.

For Ashcraft, a measure of healing occurred through the formation of two programs he and his wife, Jenn Winters Ashcraft, have started: The Healing Haven, a foundation that aims to help people deal with grief in the long term; and the Project Andrew program that focuses on making homes safer by clearing out dangerous trees and brush.

“I have had great healing, once I turned the corner on some forgiveness (about the tragedy),” Ashcraft said, noting that the formation of the organizations in Andrew’s name has furthered his healing.

Bobby Woyjeck says that learning to give has been one of the outcomes of his brother’s death. “I’ve learned a lot since losing my brother: how to cope, how to separate feelings, but most importantly how to give,” he said.

Bobby and his father, Joe Woyjeck, say dealing with the grief has been aided through two of their family’s efforts: The Kevin Woyjeck Explorers for Life Association; and preservation of the two Hotshot transport buggies through the County of Los Angeles Fire Museum.

“It’s been cleansing for us,” Woyjeck said. “Our fire family is so wonderful; they’ve put their arms around us.”

He sees his family’s work as “a way to give back; it makes us feel good.”

Ashcraft has seen other Hotshot families taking similar paths as well. “Post-traumatic growth is alive and well here in Prescott,” he said.

While the methods of the efforts vary, all appear to have a common goal: To create something positive out of a horrific tragedy.

“Personally, I think it’s very admirable,” Prescott Fire Chief Dennis Light said of the abundance of Hotshot foundations. “Each and every one is very sincere.”

Making a difference is a part of the healing process, Light said, and the family groups appear intent on “recognizing their loss, but at the same time, working to make it better for the future.”

Light, who took on the fire-chief role in Prescott about a year after the Yarnell Hill Fire, describes the results five years after the tragedy as “an amazing outpouring. They’ve all made a difference.”

Indeed, that is a point that all of the groups stress as well. Websites for the various organizations spell out the details of what they are accomplishing.

For the Eric Marsh Foundation, the focus is on helping firefighters and their families deal with the post-traumatic stress that comes from wildland fires and injuries.

Amanda Marsh, the widow of Hotshot Superintendent Eric Marsh, writes on her website of her own struggle in the years after the Hotshot tragedy.

Describing the deaths as causing a “cyclone of grief” for her and the other families, Marsh said she had become “sucked down into what felt like the endless mire of pain from losing Eric.”

Ultimately, though, Marsh wrote she began to see that other people were in the same situation from tragedies on the fire line.

“I wanted to create something to help these people, something that would bolster people’s hearts and let them know that they are seen, that they are loved and that their fallen wildland firefighter is always remembered and always honored,” Marsh wrote.

For three other grieving family members, the work focuses on “truth, transparency, accountability, and change.”

The website for the organization states: “Through their grief, the three women dedicated themselves to learning about wildland firefighting, delved into discovering what truly happened to the Granite Mountain Hotshots that led to their deaths, and committed themselves to protecting the safety of wildland firefighters so that another preventable tragedy like the Yarnell Hill Fire does not occur again.”

On her web page, Pfingston added: “If, through the work of the WFGI, one mother does not hear the words, ‘Your son is not coming home,’ then all of my work, our work, will be well worth it. I want to see every person working in our wildland fire family to have the best, to work with the best, and to achieve their dreams.”

T-shirts from fire departments from around the country line the back wall of the new Granite Mountain Interagency Hotshot Crew Learning and Tribute Center that is under development at the Prescott Gateway Mall. Project volunteer Dennis Bueschel, right, talks with Jim and Karen Norris, parents of fallen Hotshot Scott Norris. (Cindy Barks/Courier, file)

The community grieved along with the families in the wrenching months after the tragedy, placing thousands of remembrances, including T-shirts from fire departments around the country, on the fence surrounding the fire station the Hotshots once occupied.

The T-shirts, along with thousands of other items — flags, photos, notes, flowers, and stuffed animals — were removed from the original tribute fence and painstakingly cataloged and preserved in the weeks after the Hotshot tragedy by the volunteer Tribute Fence Preservation Project; photos and information on the items are available through an online virtual museum at: www.prescottlibrary.info/tfpp.

This past March, the items were moved to the Prescott Gateway Mall, where the Granite Mountain Interagency Hotshot Learning and Tribute Center is under development. The center is scheduled to open to the public Friday, June 29. Information on volunteer opportunities are available at: Granite Mountain Interagency Hotshot Crew Learning and Tribute Center — https://gmihc19.org.

Among other Hotshot-related groups and efforts:

(Watch The Daily Courier for more information on the groups’ efforts. This is not intended to be an exhaustive list, but rather a sampling of the groups and efforts that have formed in the wake of the Hotshot tragedy.)