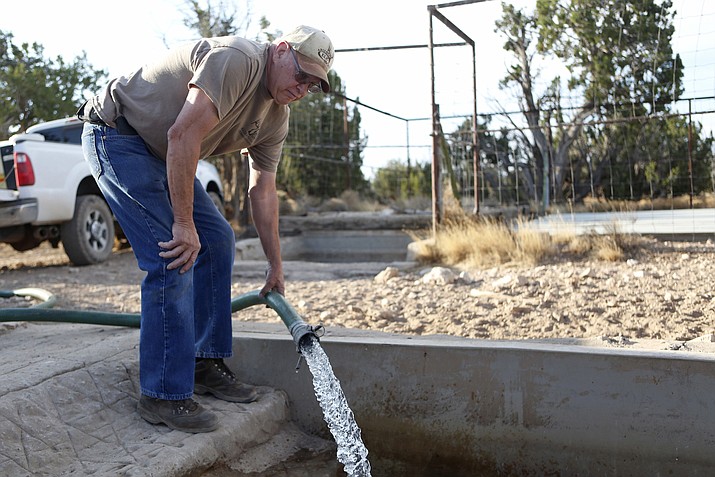 FLAGSTAFF (AP) — The Arizona Game and Fish Department is boosting efforts to refill water tanks for wildlife in the midst of drought.

The agency typically hauls about 400,000 gallons of water to tanks statewide in a normal year, the Arizona Daily Sun reported. But this year is exceptionally dry, and department officials say that figure will rise to 1.5 million gallons.

The water hauling also started much earlier than normal. The agency began supplementing the catchments in November, which hasn’t happened in at least 20 years, according to agency officials.

The department monitors and maintains approximately 3,000 state and federally owned water catchments across the state.

Mike Anderson and a few other volunteers with the Arizona Elk Society have hauled about 100,000 gallons to 78 water catchments since February just in the Flagstaff area, he said. The nonprofit has an agreement with AZGFD to maintain water levels at certain tanks so the department can focus its efforts elsewhere.

“Our goal is to have available water no greater than 2 to 3 miles apart,” said Tom Mackin, with the Coconino Sportsmen, who is also helping with water hauling.

The catchments often use some mechanism like tin sheeting to catch rain and snowmelt from a large area then funnel it into storage tanks that feed into a drinking pool or container.

The water drinkers are located strategically in areas that are known to be frequented by wildlife and are monitored by wildlife managers with the department, said Shelly Shepherd, with Game and Fish.

Elk, pronghorn, mule deer, javelina, turkeys, rabbits, birds and even bees are among the animals that take advantage of the water sources, Mackin said.