A new beginning for Bella's Place
Two years after foster mom Sue Winchester envisioned Bella's Place, she is one step closer to making it a reality 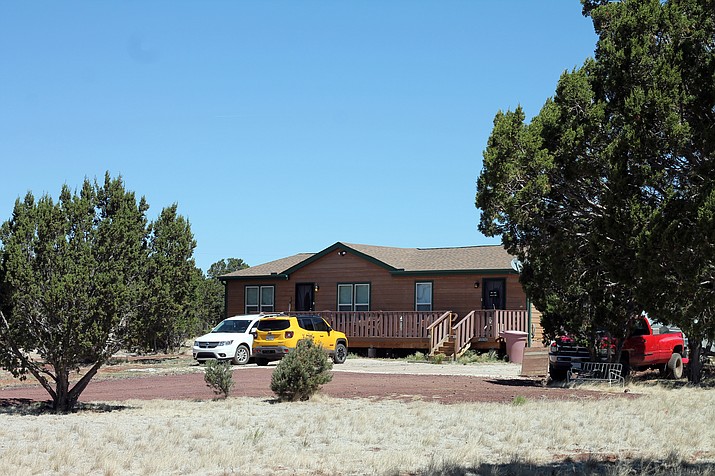 A symbol of the good that can come out of a terrible situation, Bella's Place has found a place to call home. (Erin Ford/WGCN)

Sue Winchester (center) with her adopted and foster children stand on their property in Valle, Arizona where Bella’s Place will be built. From left: Jessica Ross-Mentor, Gunner, Kaylee and Alexus. Front: Seven-year-old twins Matthew and Gary Bond. Ryan Williams/WGCN

Just ask Sue Winchester. At an age when most parents have settled into retirement and look forward to seeing the grandkids on Sundays, Winchester is raising six foster kids, three of them under 10. With her oldest, Jessica, preparing to enter the U.S. Navy and another adopted daughter college-bound, Winchester is ready to devote herself full-time to fostering.

Recently, Winchester adopted the four youngest, and has plans to open her home to more foster children in the near future.

While the original plan was to build a home from the ground up on a three-acre property in Valle, Winchester said her plans have changed.

With new construction out of reach, Winchester developed a new plan – she purchased a four bedroom, two bath home near Williams, and plans to move in Aug. 1. And thanks to many private donors and grants from Rotary International, Winchester has plans to make Bella’s Place as grand as she had envisioned in Valle.

“We got a Rotary grant for some trees and we recently received a Rotary district grant for $4,000,” she said. “I think I’ll use that money to build a fence, because the property really needs to be fenced.”

The first order of business, she said, is to build on two additional bedrooms.

“We need to build on because there are only four bedrooms, and they’re pretty small,” Winchester said. And I can’t take any kids right now because I don’t have any extra beds.”

Winchester plans to start construction on the addition immediately. Her goal is to foster at least two to four more children in her home.

“I really like to foster sibling groups, because so many times I see that they get split apart and it makes me crazy. If my twins had been split apart, it would have been awful for them,” she said.

“If my worker says ‘Gosh, I have a couple kids that really need a home (with a higher level of care),’ I could modify my license to include that,” she said.

The family still has plans to keep animals on the property and is looking at building a structure to house them in the future.

As for the property in Valle, Winchester said she would like to set up a camp where foster parents can bring their kids to socialize and enjoy an experience that other kids have.

The home is named after Winchester’s granddaughter, Isabella “Bella” Grogan-Cannella, who was kidnapped and murdered in September 2014.

On Sept. 3, two days after she was kidnapped, her body was found in a shallow grave less than half a mile away from her Bullhead City home. Bella had been playing hide and seek with then 26-year-old family friend, Justin Rector. She never came home. Rector, who had been staying with the family, was later arrested and charged with her rape and murder.

Rector is currently being held in a Kingman prison and is still awaiting trial after several lengthy delays in the case and some turnover in his defense team because of conflicts of interest.

“At Bella’s Place, we want to give back,” Winchester said. “We want to support foster families so they can go to camp. We want to raise money so that Bella’s Place can fund things for foster kids.”

Winchester said she’s excited to get started turning her new home into the Bella’s Place she envisioned two years ago. She is still seeking funding for various needs through a GoFundMe account, and said she would like someone to donate a large, ranch-style entryway emblazoned with “Bella’s Place.”

According to the Arizona Department of Child Safety, there are about 16,000 children ages zero to 18 in the state’s care — far above the estimated 10,000 available beds in 2017.