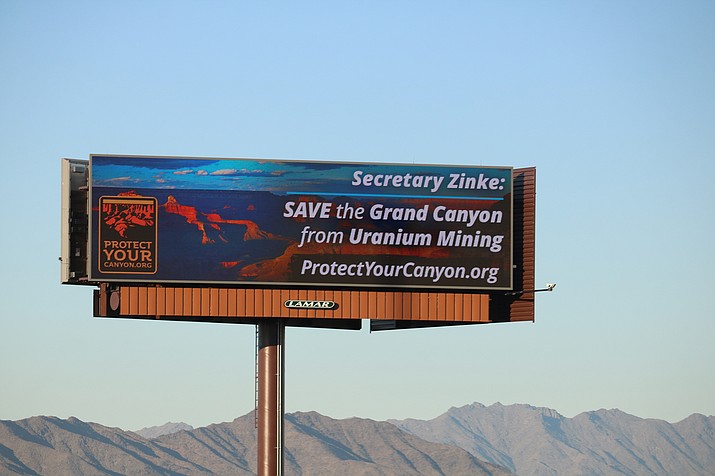 The Arizona Wildlife Federation and Trout Unlimited produced Phoenix-area billboards urging Secretary Zinke not to lift the ban on uranium mining at the Grand Canyon. (Photo courtesy of Protect Your Canyon)

WASHINGTON — Interior Secretary Ryan Zinke has “no intention to revisit uranium mining” in and around the Grand Canyon, his spokeswoman said, after outdoorsmen’s groups launched a campaign urging him to keep a 20-year mining moratorium in place.

Advocates said they were worried the Trump administration was moving toward lifting a 2012 mining ban on 1 million acres of federal land around the canyon, but Zinke’s spokeswoman said in an email June 18 that the secretary has no interest in doing that and “has made exactly zero moves to suggest otherwise.”

Mining opponents welcomed the news, but said June 19 they still plan to be on their guard.

“People are behind protecting Grand Canyon, and I hope that citizens continue to make their voices heard, so that Department of Interior continues to protect this region, and so that the mining companies are aware of how important this place is to so many people,” said Alicyn Gitlin, conservation coordinator at the Grand Canyon Chapter of the Sierra Club.

Scott Garlid said one of the first things that went through his head after hearing Zinke’s position was, “‘Good, we got their attention,’ because we’ve been asking this question and have gotten no response.”

Garlid is conservation director for the Arizona Wildlife Federation, one of two groups behind billboards that went up Monday in the Phoenix area, addressed to Zinke and urging him to “save the Grand Canyon from uranium mining.”

Then-Secretary Ken Salazar in 2012 imposed a 20-year moratorium on hard-rock mining, which includes uranium, on lands near the Grand Canyon. The moratorium was supposed to allow for further study of the environmental and health impacts of mining in the canyon region.

But mine opponents feared the Trump administration might be looking to lift the ban after uranium, in response to an executive order from President Donald Trump, was identified as one of 35 minerals critical to the nation’s security and economy. They also pointed to renewed calls from lawmakers, businesses and local government officials for the administration to review and possibly reverse “withdrawals” from mining imposed under the Obama administration.

That led to the billboards by the Arizona Wildlife Federation and the state chapter of Trout Unlimited.

Protect Your Canyon from Uranium Mining by john doss

But Zinke’s spokeswoman, Heather Swift, said the department was “disappointed to see such a tremendous waste of precious conservation dollars” by the groups.

“The Secretary has no intention to revisit uranium mining in and around the canyon and has made exactly zero moves to suggest otherwise,” she said in a statement June 18.

The advocates were pleased, but said the moratorium is just one thing needed for the region.

Rep. Tom O’Halleran, D-Sedona, said he wants to see a long-term commitment to a scientific study of the environmental and health impacts of uranium mining in the region.

“I am pleased to see the Department of Interior has decided to continue protecting and preserving the Grand Canyon Withdrawal Area and surrounding areas by not pursuing uranium mining in northern Arizona,” O’Halleran said June 19 in an emailed statement.

“This mining and milling has had a lasting, toxic impact on the health of families and water and food quality throughout region. These communities cannot afford the impact continued mining would have,” he said.

Gitlin agreed, saying a major reason for that mining moratorium was “there was so much unknown about the effects of mining on the Grand Canyon region.”

“That science has largely been defunded, and so I would love to see the department say that they would be willing to actually fund the science and really learn about the region while we still have this mineral withdrawal in effect,” she said.

But O’Halleran said it’s time for Congress to act.

“We have an obligation to address the longstanding health issues created by this activity once and for all,” he said.

Garlid was not able to say Tuesday how much it cost to put up the billboards, which will be up for another two months. But he said it was money well-spent, saying they have already drawn a “fair amount of response.”

“We have added (about) 200 signatures in the last 24 hours,” Garlid said. “People are taking interest. It’s having the desired effect so far.”