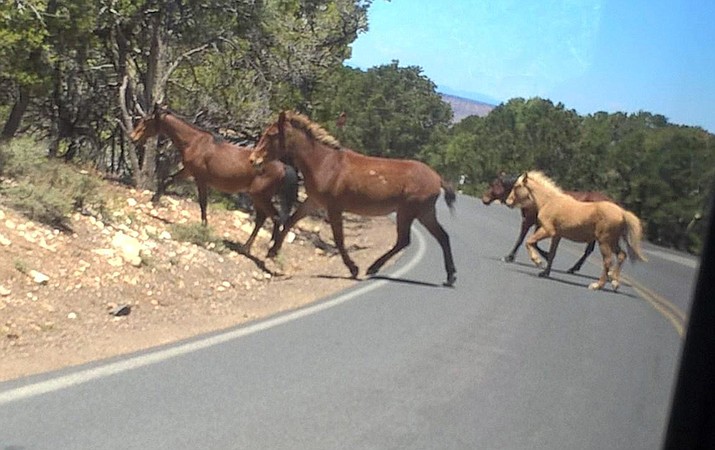 A visitor captured a photo of several horses in the park May 23. It’s not clear if they are the same ones found near Havasupai Point. (Submitted photo)

GRAND CANYON, Ariz. — As the Southwestern landscape becomes ever more parched by a lack of significant rainfall, nine feral horses have become the latest casualties of a severe drought enveloping northern Arizona.

The horses were located earlier this month near Havasupai Point, a South Rim overlook between Hermit’s rest to the east and Havasupai Canyon to the west. The horses likely made their way into the canyon searching for a water source.

Grand Canyon National Park spokesperson Kirby-Lynn Shedlowski said the horses’ owner was unidentified, and stressed that the horses were feral, not wild.

“These aren’t wild horses, they belonged to someone,” she said. “As a national park, it’s our policy to find the animals’ owner and return them if possible.”

Shedlowski also said the park has been dealing with many cut fences along the boundaries of the park, and said park staff will be stepping up patrols and repairing the fences to combat livestock wandering into the park. Although this is the first reported occurrence of horses loose in the park, Shedlowski said cattle have been reported on numerous occasions.

On May 23 a park visitor reported seeing a group of horses crossing the road in front of a park shuttle. It’s not clear if the horses are the same ones found deceased near Havasupai Point.

Abbie Fink, spokesperson for the Havasupai Tribe, said the horses didn’t have any brands or identifying marks, although one had an ear tag that has yet to be identified. While it’s unclear where the horses came from, Fink said the Havasupai Tribe has rented a water truck to haul water to all the stock tanks on their lands to ensure their horses have water.

Lack of water has been an ongoing problem for reservations and livestock owners, most recently in the Gray Mountain area of the Navajo Reservation, where almost 200 horses were discovered deceased, bogged down in thick mud while attempting to find water at a nearly-empty stock pond.

Since the horses were discovered, volunteers from Flagstaff and the reservation have been working to haul water and food to the animals. One group, Gray Mountain Horse Heroes, started a Facebook page to document the animals’ struggles and its founder said in a recent article that several donations have been received so far to support the group’s work.