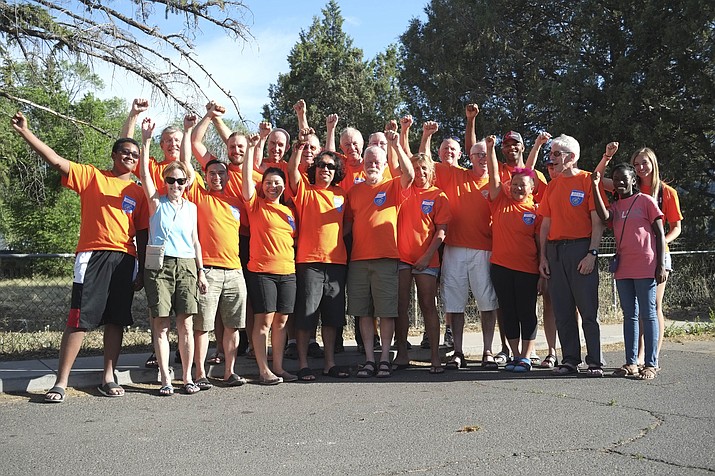 Riders with The Fuller Center for Housing enjoyed a hot meal and spent the night at St. John’s Episcopal-Lutheran Church in Williams June 13 during their 3,600 cross country bike ride to raise money for affordable housing worldwide. (Loretta Yerian/WGCN)

WILLIAMS, Ariz. —Approximately one billion people worldwide live in poverty housing and that’s one billion too many for the Fuller Center for Housing, a global organization which builds homes in underdeveloped areas domestically and abroad.

To help raise money and awareness of the need for affordable housing, 25 bicycle riders are making their way from Ocean Beach, California to Ocean City, New Jersey. Riders left California June 1, arriving in Williams June 13, where they spent the night at St. John’s Episcopal-Lutheran Church

Riders are from all parts of the U.S. and will raise $4,500 during their travel.

The Fuller Center for Housing

Each day, riders will travel approximately 75 miles, and stay in churches, schools or campgrounds along the way. Throughout the route, the riders also participate in building projects for seven Fuller Center partners on the route.

Trip leader Joel Derksen is from Winnepeg, Canada and said the Fuller Center works with families in need of a hand up and supports them in accessing affordable housing through no-interest loans. This gives them an opportunity to support themselves and improve their housing situation.

With 70 locations domestically and 20 countries internationally, Derksen said the organization works wherever they are invited.

“People come to us and say, ‘hey, we would like to partner with you and have an affiliate where we are located. Each location is self-operated and self-run,’” he said. “In Peru the Fuller Center is run by Peruvians and in Nepal its run by Nepalese.”

Derksen rode the route in 2016 and returned this year as a trip leader. Participants have been making the 3,600-mile trip for the last 11 years, beginning in 2008. Having started June 1, they plan to finish the route Aug. 10, making it a full 10 week experience.

“We average about 67 (miles per day) but do anywhere from 50 to 100 in a day,” Derksen said. “We stay in churches along the way and are always blown away by the incredible generosity and hospitality that these church folk offer.”

The Fuller Center is a Christian organization but are ecumenical — they do not belong to a specific organization.

The group stopped in Williams in 2015, and also stayed at St. John’s Episcopal-Lutheran Church. After leaving Williams, the group rode to Grand Canyon June 14 before heading to Flagstaff. They have currently raised $280,000 toward their goal of $400,000 for the year, according to Derksen.

“We’re always looking for help in getting ourselves there,” Derksen said.

“There’s a billion people worldwide who live in poverty housing and that’s a billion too many. So we’re here to raise money and awareness towards the Fuller Center’s work,” he added.

More information or to make a donation is available at www.fullercenter.bikeadventure.org.