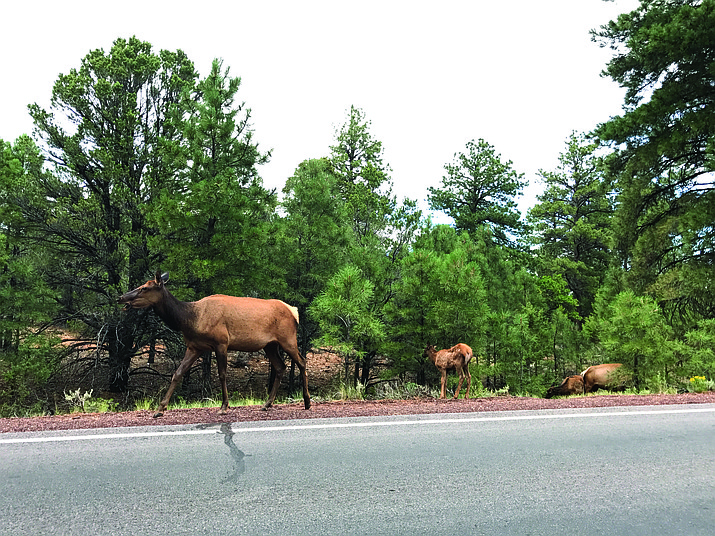 PHOENIX, Ariz. — It’s a traffic call heard too often this time of year inside the control room at the Arizona Department of Transportation’s Traffic Operations Center: Car versus deer.

From sunset to sunup, it’s not uncommon for a dozen vehicle strikes with deer, as well as antelope, elk, bear and other animals, to occur during a single evening as wildlife cross rural roadways. In fact, since 2012, more collisions with wildlife, livestock and family pets happen in June than nearly every other month; October sees the most. Annually, more than 80 percent of animal-related crashes are with wildlife and 86 percent of crashes involving animals occur in rural areas.

According to the Arizona Game and Fish Department (AZGFD), the higher-than-average number of wildlife-related crashes in June is likely related to the beginning of monsoon season, which translates into a green increase of plants and provides more available water, allowing wildlife to travel greater distances and forage. It also coincides with more motorists traveling to Arizona’s high country, meaning more vehicles on roadways.

In some of the most heavily-traveled migratory corridors, ADOT has implemented creative solutions that promote safe travel while protecting wildlife and connecting ecosystems. These projects include wildlife underpasses and elk crossings along State Route 260 east of Payson, desert bighorn sheep overpasses near Hoover Dam on US 93 and two wildlife crossing structures on State Route 77 near Tucson.

Partnering with AZGFD, these efforts have increased vehicle-travel safety while preserving and protecting wildlife. For example, a fencing project linking three existing crossing structures on State Route 260 reduced elk-vehicle collisions by 98 percent over a six-year span.

When traveling in rural areas, drivers are encouraged to pay heed to signs indicating areas where wildlife is prone to cross roadways. Obeying the speed limit and paying attention to the shoulders of roadways will also reduce the chance of crashing into an animal. AZGFD advises:

• Deer are most active in early mornings and evenings.

• If you see one animal there are probably more, so slow down.

• Typically, you should not swerve to avoid hitting the animal. Stay in your lane and firmly brake.

• However, if it is a very large animal and there is no oncoming traffic and the shoulder is safe on either side of the road, it may be safer to swerve rather than risk the impact from a large animal, like a cow, horse or adult bull elk.

Following crashes with wildlife (81.7 percent), livestock is the next most common at 13.6 percent. Family pets in urban areas make up 1.9 percent of crashes involving animals.