Should Route 66 be a Historic Trail? 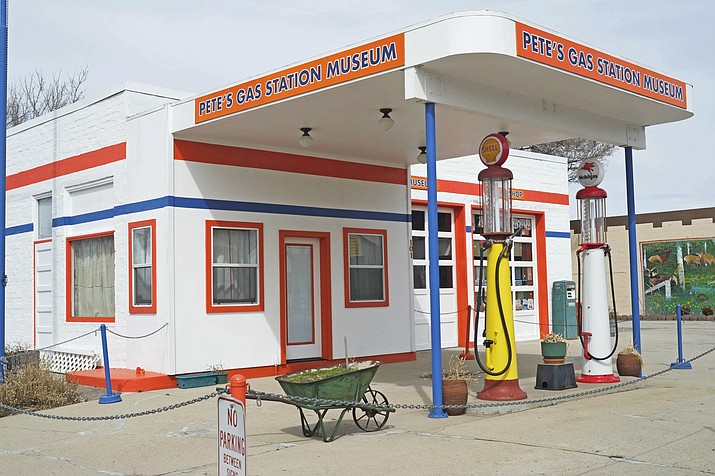 Pete's Gas Station Museum is one of many landmarks along Route 66 in Williams. (Loretta Yerian/WGCN)

WILLIAMS, Ariz. — Route 66 is closer to Historic Trail designation following unanimous passage of a bill by the House of Representatives June 5. The bill had previously passed the House Natural Resources committee in January. The bill now moves to the U.S. Senate for consideration.

This bill would amend the National Trails System Act to designate a trail of approximately 2,400 miles extending from Chicago, Illinois, to Santa Monica, California, as the Route 66 National Historic Trail.

LaHood said the bill, introduced Feb. 9, 2017, would provide a permanent program to preserve, promote, and economically develop the highway.

Proponents of the preservation of Route 66 are concerned that millions of federal dollars could be lost when the National Park Service Route 66 Corridor Preservation Program, passed in 1999, expires in 2019.

“With passage of H.R. 801 in the House, we are one step closer to ensuring our efforts to preserve, promote, and develop Route 66,” said Bill Thomas, chairman of the Route 66 Road Ahead Partnership board of directors, and supporter of the legislation.

Following the announcement of the proposed bill in November 2017, the Williams City Council was troubled by the language of the bill and the potential impact it could have on local control of Route 66 through Williams.

Of primary concern for the council was the portion of the bill that stated the United States could acquire land within one-quarter of a mile on either side of the trail.

Councilman Frank McNelly said the wording made it seem the bill would authorize the purchase of land along the corridor by the federal government, and wondered if the NPS could use eminent domain to acquire any property it deemed necessary.

The council passed a resolution Dec. 14 opposing the proposed bill that would designate Route 66 as a National Historic Trail under the administration of the National Park Service. The council admitted they had no legal authority to stop the passing of the bill, but wanted the authors to know they opposed the bill as worded.

The council was also concerned with who would be in control of Route 66 in downtown Williams.

McNelly and Williams Police Department Lieutenant Daryl Hixson wondered if the city would have to request permission for events such as road closures and parades.

The council’s resolution included a request that the House of Representatives and NPS reconsider the proposed legislation, including the language authorizing the United States to acquire for the National Trail land within one-quarter mile on either side of Route 66.

It may have been the concerns of the Williams City Council that led to the amendment of the legislation in January 2018 before going in front of the House Natural Resources Committee.

LaHood kept most of the bill intact, but added two lines to the original bill, which addressed the land acquisition issue and potential energy issues.

The amended portion stated that the Secretary of the Interior may not use eminent domain or condemnation in carrying out the Route 66 National Historic Trail Designation Act. The act also does not authorize the disruption to the development, production or transmission of energy.

Response to the city

The Williams City Council’s response to the legislation surprised some supporters of Route 66, including Thomas. Thomas submitted a lengthy letter to Mayor John Moore to address some of the council’s concerns.

“Rather than view HR801 as a potential detriment to tourism and the preservation and promotion of the road, we see it as the next logical and most helpful step to take to assist towns like Williams and other communities along Route 66,” he said in the letter. “The primary purpose of HR801 is to put in place a means by which continued federal-level attention can be used to help promote and preserve Route 66.”

According to a 2013 Directive by then Director of the Department of the National Park Service John Jarvis, the intent of the system is to create protected corridors for recreation and historic preservation often through agreements with public agencies, land trusts, private landowners and others.