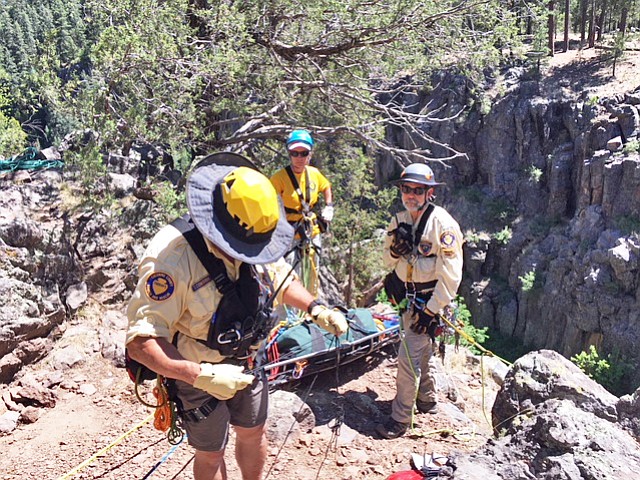 A quiet Sunday in Williams changed quickly when a rock climber was injured and needed rescue in Sycamore Canyon June 10.

At 11 a.m., Coconino County Sheriff’s Office (CCSO) received a 911 call for a climbing accident in the popular Paradise Forks area of Sycamore Canyon.

The caller stated that a 22-year-old female climber had been injured in a fall and needed rescue.

According to John Moede, assistant chief for Williams Fire Department, two rescuers from Williams responded to the scene where they met with a

CCSO deputy and found the victim being attended to by bystanders approximately 80-100 feet below the rim of the canyon.

Moede said they were able to get in voice contact with the party who relayed that the patient was in stable condition.

CCSO Search and Rescue arrived at the scene at 1:15 p.m. and established a technical rope system to lower a rescuer over the edge to evaluate the patient and prepare a rope rescue. Another rescuer began hiking to the bottom of the canyon.

Because of the nature of the injury and complexity of the environment, CCSO determined a short-haul rescue was the best option. DPS Air Rescue was requested.

“They were planning to send someone over the side,” Moede said. “But as time went by there was an issue with her movement. She was in a lot of pain.”

The DPS Ranger brought a Northern Arizona Interagency Heli-Rescue team member to rappel to the patient. The rescuer assisted an initial search and rescue member on scene with splinting the injury and preparing the patient for extrication.

At 4:25 p.m. the patient and heli-rescue technician were short-hauled out of the canyon by the helicopter to a landing zone a short distance away. A Life Line ambulance then transported the patient to Flagstaff Medical Center where she was admitted for treatment of her injuries.

The fall victim was from the Apache Junction area and was climbing with another person, although several other climbing parties were nearby and assisted.

Moede said the climber sustained a tibia-fibula fracture of her right leg.

“The way I heard from bystanders was that her leg came down on an outcrop and rolled,” Moede said. “She then lowered herself or they helped her to the ground. It was about 100 feet down.”

The Coconino County Sheriff’s Office would like to thank all of the public safety organizations that responded to this incident as well as the other climbers in the area who volunteered to assist with care for the injured climber while we were responding.

“It was an excellent operation,” Moede said. They had about 15 people come in to assist.”