Construction projects continue on I-40 between Williams and Flagstaff 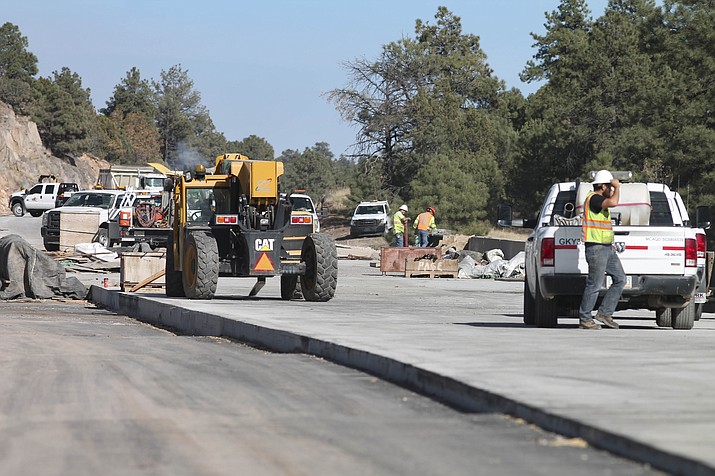 Fann Construction works on I-40 in October 2017. The company is continuing work this summer on I-40 east of Williams.

It’s been over a year ago since local automotive shops repaired more than 150 blown tires in a 60-day span caused by potholes on Interstate 40. Since then, Arizona Department of Transportation (ADOT) has started three paving projects along the I-40 corridor from west of Williams to Flagstaff. Devil Dog to Williams

This project includes a complete rebuild of a five miles stretch of I-40 in the westbound direction between milepost 156 and 161 west of Williams. Work is being completed by Fann Construction and is on-schedule, according to ADOT. Fann Contracting holds the contract for this project and it is scheduled to be completed later this fall.

“They’re looking to complete this section by the fall when temps cool down,” said Ryan Harding, spokesman for ADOT.

In addition to a complete repave of the five mile stretch in both the east and westbound lanes, Fann has installed new guardrail and rehabilitated the bridge deck at the Devil Dog Wash overpass.

Last year, crews rebuilt the eastbound lane using 14 inches of concrete. All corridors or drainage lines and under the road were also replaced. The westbound lanes will have the same repairs and concrete laid.

Until the project is complete, temporary crossovers have been built in the median to shift traffic between eastbound and westbound lanes.  A single lane of travel for both directions will be provided at all times. There are lane restrictions and reduced speed limits in the area. Most construction will occur primarily during daylight hours, Monday through Fridays.

Fann also holds the contract for repairing 17 miles of I-40 stretching between Parks and Williams. The project also includes bridge deck repairs at Garland Prairie Road and Pittman Valley Road.

To complete this project, temporary crossovers have been built in the median to shift traffic from one side of the interstate to the other.

“We are doing total reconstruction on the freeway on both sides. While we do that we have to close the ramps and there’s a traffic interchange while we’re rebuilding. ADOT sets up detours on the freeway,” said Dave Gregson, project manager for Fann on the Cataract Lake to Parks project.

“They have detours set up basically sending people down to Parks or Highway 64 — based on what direction you’re going to turn around and get back to where you want to go.”

“We can’t close Parks (exit) until we have Garland Prairie and Pittman opened back up,” Gregson said. “When we close Parks — the ramps on the west side of Parks bridge, toward Williams, both of those ramps are going to remain open.”

This project is being completed in two phases. It began with work on westbound I-40 between Garland Prairie Road and Pittman Valley Road in early April and has now moved to eastbound I-40 between Pittman Valley Road and Garland Prairie Road. Construction will pause for the winter season and is scheduled to resume in spring 2019 for additional paving, bridge and intersection work. The project is scheduled for completion in late 2019.

“Crews will work until the weather turns cold and then return next year to finish the project,” Harding said. “This project is mainly repaving with some spot rebuilding between Garland Prairie and Pittman Valley roads.”

Crews are scheduled to work Monday through Friday from 5 a.m. to 6 p.m. One lane will remain open in each direction throughout construction

Rehabilitating work to the existing pavement between milepost 179 and 191, approximately four miles west of Flagstaff, began in June 2017. The project also included installation of new guardrail throughout the project limits, and minor bridge repairs to the east and westbound Bellemont traffic interchange, A-1 Mountain and at Riordan.

“It was the main I-40 paving project last summer where crews replaced the top several inches of asphalt. Crews will be returning (this) week to start laying the final layer of asphalt, completing the project,” he said.