A 20-year ban on new uranium mines was issued to study whether mining will contaminate the seeps and springs, which provides water to both people and livestock. (Photo courtesy of Grand Canyon Trust)

Too Precious to Mine Film Screening Kit 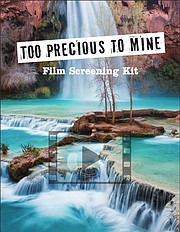 GRAND CANYON, Ariz. — Six million visitors travel to Arizona every year to see the Grand Canyon. The majority will explore it from the scenic overlooks along the South Rim. A much smaller group of intrepid hikers will make the journey to the canyon floor near Supai, the most remote Native American reservation in the continental United States.

Here, any tribal member will tell you that water is life. The Havasupai rely directly on water from Havasu Creek to not only sustain life, but for a living as well. The tribe depends on tourism to survive, with most visitors making the trip to swim in the pristine turquoise waterfalls located on the reservation.

For them, it’s both a present and future crisis – the tribe has been hanging in a limbo of possible contamination of their sole water source for decades.

That’s the thing that filmmaker Justin Clifton said pulled at him the most.

“We have this tendency to think of trauma as something that has happened to us, something in the past,” he said. “But to talk to the Havasuapi, who

certainly have a lot of trauma in being relegated to a very small portion of the lands they once occupied, the uranium mining issue, it’s actually a trauma that exists in the future as well. It’s fear of what is to come. Essentially, an entire cultural identity and way of life kind of lays in the balance with zero control or ability to do anything. To witness that future trauma was really eye-opening.”

Too Precious to Mine by Grand Canyon Trust

The film, at just under 10 minutes long, took a few months to film from beginning to end and, unlike many documentaries, encompassed only about six hours of footage. Clifton said the majority of time was spent figuring out how the film was going to come together around the many voices, from Havasupai tribal members to Coconino County Supervisor Art Babbott and University of Nevada-Las Vegas professor of hydrology Dr. David Kreamer. Clifton also worked with other local filmmakers to get footage of events happening on the ground, such as a June 2017 prayer gathering at Red Butte to protest uranium hauling and mining on or near tribal lands and sacred places.

Clifton has been making environmental and social justice-based films for the past five years, and a lot of his focus has been on the plights of indigenous peoples of the Colorado Plateau. He also worked with the Inter-tribal Coalition to get Bears Ears designated as a national monument.

“The work on the Colorado Plateau and the landscapes that I care about tend to always involve indigenous voices,” he said.

Through filmmaking, Clifton strives to connect those who may not have a lot in common on the surface, but who have a shared love of the lands they roam, from tribes to activists to sportsmen to ranchers.

“When you can actually sit down and have a conversation with people, you find out you actually have a lot more in common than not,” he said. “There’s a lot of opportunity to find common ground.”

Clifton said most of his work the past few years has been in finding that common ground and reaching out via the art of film.

“I’m fascinated with the idea of how to broaden the conversation with a more diverse set of ears, because you can’t really have a conversation about politics directly,” he said.

The film can be viewed at https://www.grandcanyontrust.org/too-precious-mine.