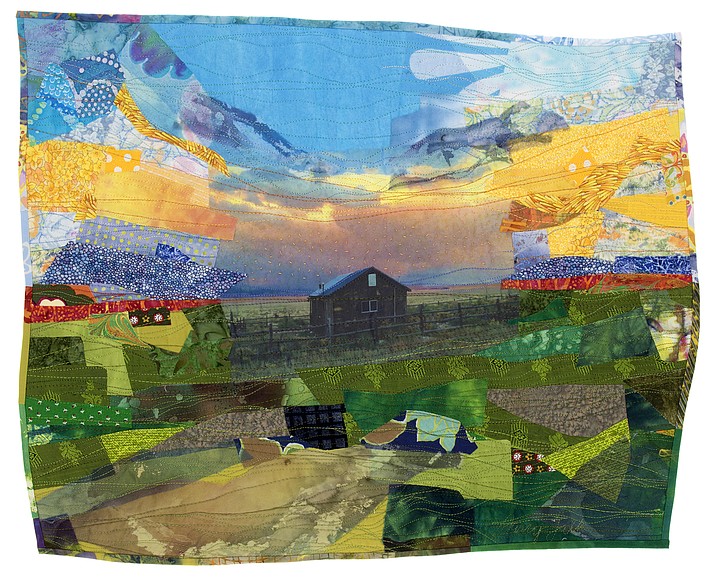 The Kane Ranch guest house on the North Rim of the Grand Canyon, built in the late 1870s and restored in 2005. (Photo/Grand Canyon Trust)

GRAND CANYON, Ariz. — In October 2017, 12 local artists set out for Kane Ranch, an isolated guest house on the North Rim, far from the hectic hustle and bustle visitors might normally associate with Grand Canyon National Park.

The artists came together to connect with the land and tell its stories — stories of love, loss, challenges or complex beauty seen through the eyes of an eclectic group of nature lovers. After a weekend spent both together and apart, the artists produced a wide-ranging exhibit that displays a diversity of talent and issues facing the Colorado Plateau.

According to Emily Thompson, volunteer program director for the Grand Canyon Trust, it’s the first time the organization has sponsored a weekend retreat for 12 people. Thompson said the retreat and subsequent online exhibit was beneficial for both the artists and the trust.

“The artists were able to go out and connect with the land and tell its stories, and we’ll use those images to help get the word out through marketing and community outreach,” Thompson said.

Thompson said although the group occasionally got together to discuss issues and have meals, most of the time was unstructured, allowing the artists to go out into their own space and capture the essence of the land as they see it, whether it’s through a lens, a paintbrush or even textiles. Thompson said many were up and gone before sunrise.

Kane Ranch sits perched on the monocline leading down to the North Rim, about 11 miles down an unpaved road through House Rock Valley. It’s a sparse environment, built by Mormon ranchers in the late 1870s. The ranch, one of two purchased by the Trust in 2005, has been restored and is used by the organization for conservation science initiatives. Cattle still graze on the property through a partnership between the Trust and the Conservation Fund. The Trust completed a restoration of some of the buildings soon after.

Here, communing with the land is as easy as shuffling out the front door and going wherever your feet happen to take you. 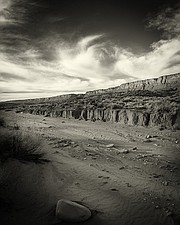 Thompson, who joined the artists for their weekend retreat, said the rugged landscape offered an opportunity to just inhale and connect with the land.

“It’s a quiet, remote and inspiring place to be,” she said. “A lot of the artists fell in love with it, and several returned to the property for a few days here and there to complete pieces.” 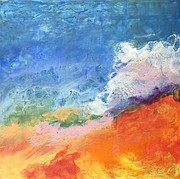 “A Sunrise and a Canyon” by Flagstaff artist Deb Napple. Napple works with oil and encaustic, or heated, pigmented wax. (Photo/Grand Canyon Trust)

Those pieces, which are all curated in an online exhibit at https://www.grandcanyontrust.org/artist-retreat, tell the story of the land through different mediums. A black and white portrait of an endangered California condor sits in contrast to an almost neon watercolor and ink painting of the North Rim and Colorado River. Even photographer Ed Dunn’s stark black and white photographs capture a landscape rich in contrast and texture.

That’s the beauty of the exhibit. Kaibab Plateau country speaks to everyone in a different way.

Dunn’s photos, for instance, reflect how he sees climate change causing the land to struggle.

“We have damaged cryptobiotic soils and they may not recover for centuries,” he said of his darkened images. “Climate change has a detrimental effect on the land, creating imbalance and mass die-off of trees, and catastrophic fire and flash floods that are no longer held back by living soil. The land struggles.”

Amy Martin chooses to focus on the people linked to the land through culture and heritage. She tells the stories of indigenous women through a lens, and pens their stories next to their images to demonstrate that they are all artists, activists and advocates, strong voices for their tribes and homeland.

“This series celebrates indigenous women on the Colorado Plateau who are advocating for protection of their culture, communities, and endangered lands through their actions, words, and art” she said, describing a series of portraits of three Navajo women. “These portraits honor kinship with the land, reveal what is at stake if these landscapes and cultures are lost, and celebrate the strength of the women who are on the frontlines of their protection.”

And while many artists told stories of a need for environmental justice, others simply soaked in the beauty of the land.

“Dolii” by photographer Amy Martin, tells the story of indigenous artist Venaya Yazzie, who strives to preserve her Native way of life through her artwork. (Photo/Grand Canyon Trust)

Deb Napple focused on sunset over the North Rim, a sight she’s painted many time since moving to Flagstaff from New Jersey. She paints en plein air, meaning she creates the piece outside, in the atmosphere, watching the light and shadows change as the day wears on.

For her, art is a talent she devotes to helping others see the beauty intrinsic in a place seen in person by few.

“Light and color bouncing around a wide open horizon, reflecting on rocky walls plunging into the earth — this is the Colorado Plateau and it cannot be described, only experienced,” she said.