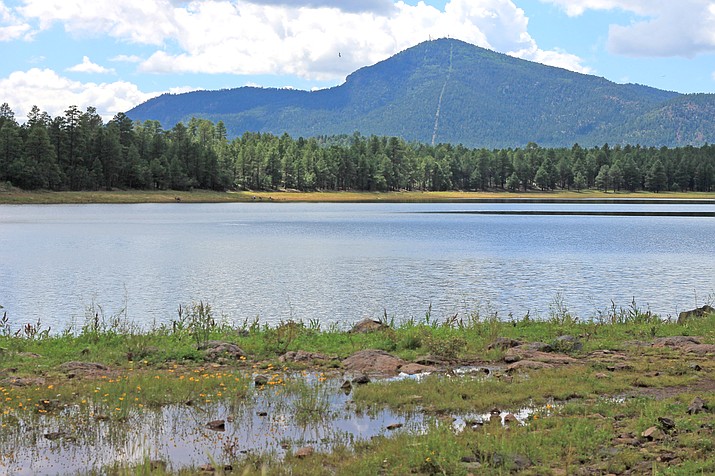 Dogtown Lake is one of the primary sources of water for the city of Williams.

The Williams City Council approved the city’s new Water Master Plan at its May 24 meeting and subsequently authorized the application for a $15 million loan to begin tackling water system deficiencies identified in the plan.

The city hired Woodson Engineering & Surveying, Inc. to evaluate the city’s water system and make recommendations for improvements. The engineers looked at the current demand on the system, evaluated its performance and identified system deficiencies. They also provided a model to use for future growth.

The plan identified eight deficiencies in the system, with the replacement of the Dogtown water line as the top priority.

The city of Williams primarily uses Dogtown Wells 1 and 2 and Dogtown Lake to supply the city with potable water. The city is hoping to replace the aging Dogtown water line. (Wendy Howell/WGCN)

“The vulnerability of the system is the town solely relying on the water treatment plant,” said Project Engineer Michael Janes.

Janes said if the water treatment plant became disabled, the only water the city would have is from the Santa Fe Well, which produces just 60 gallons per minute.

The solution, Janes said, is to look at methods to provide water to the city without the treatment plant.

Currently the city uses Dogtown Wells 1 and 2 and Dogtown Lake as the primary source of water for the city. However, the well water and lake water are combined into one water line that carries the mixed water to the Cataract Pump Station, which is then pumped to the city’s water treatment plant for processing.

“Dogtown wells produce good water,” Janes said. “All they need is a little chlorine in them and they would be acceptable to put out right into distribution.”

The engineers have outlined a plan to replace the Dogtown water line with two lines, one that would come from the wells and one from the lake. The water from the wells would be lightly treated and sent straight to a storage tank. The lake water would be pumped to the water treatment plant.

"These are high production wells,” Janes said. “These are 250 gallons a minute each, plus or minus.”

With dual lines, the system would become more robust and would allow water from other sources to be put into the system, Janes said. There would be more capacity.

Bypassing the pump house and water treatment plant would also save the city money, Janes said.

The engineers believe the Dogtown water line is 60 to 70 years old, and most likely was installed by the railroad prior to the 1950s to use in steam engines.

The water treatment plant staff believe that 10-18 percent of the water produced in Williams is lost in the system, and the engineers suspect much of that loss is from the aging Dogtown water line.

“The problem is they keep trying to fix this,” said Keith Buonocore, acting city manager. “They are out there repairing it all the time.”

With the water master plan in hand, the city can now apply for grants and loans to begin addressing the deficiencies, Buonocore said.

Buonocore is hopeful that the Water Infrastructure Finance Authority (WIFA) will help fund the Dogtown lines, with a partial grant or loan.

“We’re going to apply for this loan and see if WIFA will fund it and see what participation they’ll have in it,” Buonocore said.

Currently the city obtains 90 percent of its water from the Dogtown wells and Dogtown Lake. The city can also obtain surface water from four other lakes, which include Kaibab Lake, City Dam, Santa Fe Dam and Cataract Lake. Besides the Dogtown wells, the city has the Rodeo Well, the Santa Fe Well and the partially completed Sweetwater Well.

The combined capacity of the five lakes is 894 million gallons, although capacity varies each year based on precipitation.

operate without causing pipe failures to the line.

The engineers also addressed the storage capacity of water for the city. They said the desired storage capacity for potable water is three days, with a two-hour fire flow at 1,500 gallons per minute.

The engineers found that Williams has a daily water demand of 524,000 gallons. The total water storage for the city is 2.58 million gallons, however, much of that is unavailable because of tank deficiencies, Janes said.

The plan recommendation is for an additional one-million gallon tank for more water storage.

The engineers found additional deficiencies within the residential and business districts, which include undersized waterlines and inefficiencies because of elevation.

The engineers said pressures of 40 - 70 psi are ideal, and during the survey they found that Arnold Acres, Quarter Horse Road and Taber Street had pressures of 15 - 28 psi. Suggested remedies include larger water lines, system reconfigurations and booster pumps.

The engineers recommend removal of the Taber Tank because of the poor condition and limited use. They suggest putting a variable frequency drive at the Taber Pump Station and replacing undersized water lines.

The Kaibab Estates, Taber Tank and Arnold Acres neighborhoods do not meet the minimum flow rate of 1,000 gpm at 20 psi for fire flow. The fire hydrants at Route 66 and Railroad at Locust Street also do not meet the flow rate. The engineers made recommendations of increasing water line sizes and looping some of the lines to solve the deficiencies.

Janes said until these changes are made, firefighters may need to bring water tenders to any fires in those neighborhoods.