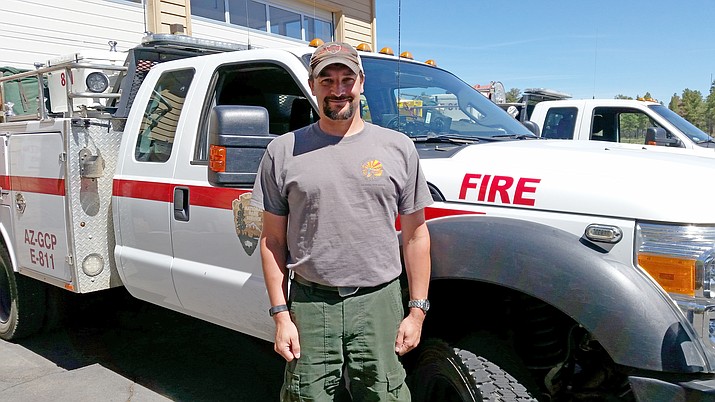 GRAND CANYON, Ariz. — After 15 years at Grand Canyon, fire and aviation chief Jay Lusher is headed to Denver to take on the role of regional fire management officer for the National Park Service’s (NPS) Intermountain Region. His first day on the job will be July 22.

For Lusher, a long-time love of firefighting began at a young age —Lusher’s father was a firefighter for a small town in Wyoming.

“I can remember as a kid going to help out at the fire station,” he said.

While he was going to college, Lusher’s father suggested he take a wildland firefighting job over the summer to earn some extra money for school. Lusher said he enjoyed the job so much, he decided to move in that career direction and become a full-time firefighter. He has over 20 years of experience in wildland firefighting, and spent two years at a structural fire department in Wyoming.

Lusher came to Grand Canyon in 2003, and it’s the only national park he’s ever worked at. He started out as part of the helicopter crew, where he worked for 10 years, the last six as the helicopter program director.

“We do search and rescue and EMS responses, fire responses … we help with the trail work, water and utility work, we work with the science and resource management group with threatened and endangered species support,” he said.

In his new role, Lusher will be more of a manager and won’t undertake as many hands-on projects.

“It’s more of a staff role — I’ll provide staff support to the 15 wildland fire departments in the region,” he said. “I’ll be giving policy and budget guidance, program reviews.”

Lusher said the 15 national parks that make up the Intermountain Region all have different needs, and he’ll be working with fire management officers from each park to address needs specific to each park. He’ll also assist them with any extra needs they may have, and if they experience a large fire and need additional staff support, Lusher or other regional staff will pitch in.

Lusher will also be working closely with national coordination centers — the closest one is located in Boise, Idaho. He’ll be working on the strategic placement of resources for interagency fire needs. That means working with other agencies, such as the Forest Service, to be prepared with an efficient fire response in case of a wildland fire outbreak.

While the national office in Boise works closely with the Department of Interior to secure NPS funding, Lusher will be working closely with the national office to address fire and aviation funding needs for each of the 15 parks, mostly for fuels management. This includes timber thinning and prescribed fire operations meant to help restore fire-adapted ecosystems and protect communities, historic structures, cultural sites and other assets.