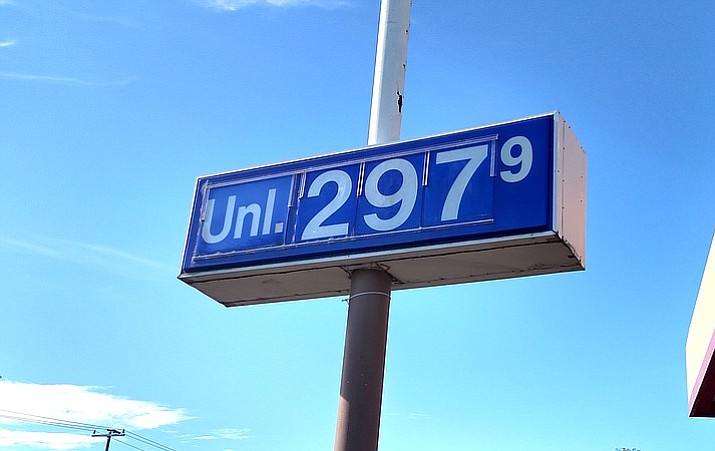 While Arizona’s statewide average for a gallon of unleaded gasoline currently stands at $3.08, the Cottonwood Circle K Tuesday morning was selling gasoline for as low as $2.97 a gallon. (VVN/Dan Engler)

COTTONWOOD, Ariz. — Average retail gasoline prices in Arizona have risen 5.2 cents per gallon in the past week, averaging $3.08/gallon, according to GasBuddy’s daily survey of 2,269 gas outlets in Arizona.

This compares with the national average that has increased 1.8 cents per gallon in the last week to $2.96/gallon, according to gasoline price website GasBuddy.com.

Areas near Arizona and their current gas price climate:

“As the summer driving season gets underway, there’s reason to be optimistic and perhaps happy: OPEC appears ready to raise crude oil production to meet higher global demand, dashing at least for now, the likelihood of seeing the national average hit that ugly $3/gallon mark,” said Patrick DeHaan, head of petroleum analysis for GasBuddy. “For now, the national average peaked just under that level and prices are now starting to move ever so slowly lower, but more drops are coming. Crude oil dropped to $66.84 per barrel in electronic trading last night, representing a $5 per barrel loss in less than a week. I can confidently say that gas prices will be moving lower this week and perhaps into next week, so long as nothing comes out of left field to derail the plummet in oil prices. Motorists beware, however- the fall in gas prices will be slow to arrive at some stations and quick at others, so before gleefully filling up, check if you’re getting the best deal in the area.”