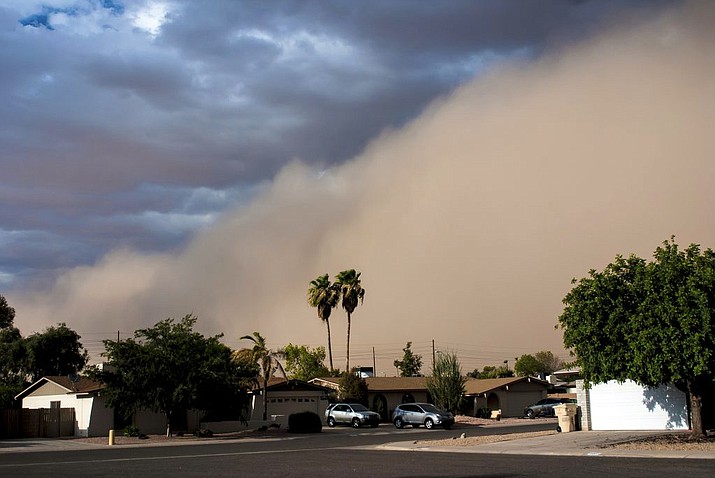 As Arizona’s years-long drought continues, conditions in the state are ripe for spawning intense wildfires and haboobs from the high winds and lightning that typically form the early part of monsoon season, which begins in two weeks. (Kenneth Hagemeyer/Creative Commons)

WASHINGTON — What’s a monsoon season without rain? Trouble, according to experts.

With Arizona in the grip of a years-long drought, conditions are ripe for spawning intense wildfires and haboobs from the high winds and lightning that typically form the early part of monsoon season, which begins in two weeks.

“As the monsoon season starts, we’ll start having storms, but they’ll be dry storms,” said Randy Cerveny, a professor of geographical sciences at Arizona State University. “By the time that we get into July and into August, hopefully those dust storms start to turn into more rain storms.”

But it’s a long way between now and then for a state that is already parched.

The National Oceanic and Atmospheric Administration reported that April was the 10th-driest month in the last 124 years in Arizona, with only 0.06 inches of rain recorded in the state — an amount so small that NOAA officially classifies it as immeasurable.

The Arizona State Climate Office says the state is in the 21st year of drought and NOAA’s long-term seasonal forecast calls for drought conditions to persist in the Southwest this summer.

The National Drought Mitigation Center reported that all of Arizona is currently experiencing some level of drought, and NOAA issued a fire hazard warning for the entire northern half of the state earlier this week. Parts of five national forests in the state are closed this week because of wildfire conditions.

And even though monsoon season starts on June 15, June remains the state’s driest month of the year. That leaves much of the state dry and dusty in front of forthcoming, powerful winds the storms will stir up for now.

“When there is not enough moisture in the air to generate rain … it is mostly air coming down and pushing outward, which picks up dust,” said Nancy Selover, the state’s climatologist.

“Strong winds move the fire along, but it also leads to a situation where it dries everything out much quicker because it sucks the moisture out (from vegetation),” she said.

The Arizona Department of Forestry and Fire Management has been handling at least one active wildfire nearly every day, according to Tiffany Davila, a department spokeswoman, and the peak of wildfire season has not arrived quite yet.

“Now that we’re moving into summer, with the temperatures increasing and more people traveling on the road, we’re starting to see more fires every day,” Davila said.

“As far as the outlook goes, it’s (high fire activity) supposed to be active throughout the entire state,” she said. “We’re seeing a lot of activity in northern Arizona, but we are just getting into the heart of fire season.”

Matthew Hirsch, a senior meteorologist with National Weather Service in Phoenix, says the forecast for summer temperatures is clear.

“There’s a higher likelihood of above normal temperatures for the summer,” Hirsch said. “But the precipitation is a little more difficult to forecast.”

Cerveny, who is also a rapporteur on extreme records for the World Meteorological Organization, said that it has to get hotter and drier before it can get wetter.

“We have to have really hot, dry conditions over the next month to help change the wind patterns so that we start to pull moisture up from the Gulf of California and the Pacific Ocean,” Cerveny said.

He estimates that some 30 to 40 percent of Arizona’s annual rainfall occurs during monsoon season, which runs through the end of September. However, before those rains fall, there is still high wind and lightning strikes.

“The first few storms are going to have a lot of lightning without any rain, and that’s a bad situation for wildfires,” Cerveny said.

“Unfortunately, our wildfire situation here in the desert is not going to get any better over the next month and, in fact, will likely get worse,” he said. “That’s one of the things we’re most concerned about right now.”