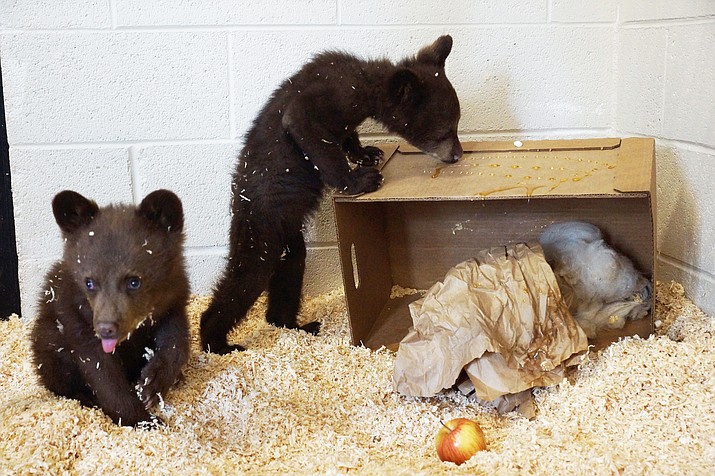 wo four-month old bear cubs were recently discovered hiding at the top of a 75-foot tree in a Pinetop-Lakeside, Arizona neighborhood after their mother was taken by Arizona Game and Fish. The bear cubs were relocated to Bearizona. (Bearizona Wildlife Park)

There’s no doubt about it, bears are on the move across Arizona.

In Payson a bear recently attempted to enter a home in Payson. The bear was captured and euthanized by wildlife officers from the Arizona Game and Fish Department (AZGFD).

On May 28, AZGFD wildlife managers removed a sub-adult male bear from the north Phoenix neighborhood of Anthem that had previously been relocated from Prescott. On May 27, officers in the White Mountains were forced to remove a habituated female bear feeding on large piles of food and water left by a local resident.

The same female bear had been captured in Pinetop in June 2017 and was relocated to a pre-approved release site near the Mogollon Rim, approximately 55 miles away. In May, it returned to Pinetop with two cubs. A day after euthanizing the bear, neighbors told AZGFD about the bear’s two cubs, which were safely located, evaluated by a local veterinarian and transferred to Bearizona in Williams.

AZGFD is keeping an eye on other nuisance bears in Show Low, Yarnell, Pinetop, Mesa and along the southern border. The common thread among each of the incidents is bears looking for an easy meal and water in populated areas.

“When a bear becomes habituated to people for food and water, it can become a real threat to public safety,” said AZGFD Wildlife Manager Shawn Wagner. “People feeding wildlife think they’re helping wildlife, but they’re putting everyone’s safety at risk — whether it’s a neighbor out walking their pet or a family out for a jog.  When a bear doesn’t get the meal it’s become accustomed to, it can attack whoever is around.”

Game and Fish said it has seen an increase in bear activity statewide because of drought conditions.

“This season’s extremely dry conditions are making it difficult for bears to find natural food and water sources, increasing the chances of bears coming into neighborhoods,” said Wildlife Manager Jarrod McFarlin. “Bears can become habituated to human-related food sources and quickly lose their fear of humans. People living in bear country should do their part to keep wildlife safe by removing attractants such as bird seed, pet food, hummingbird feeders and trash from their yards, and by keeping all trash inside a secured area until collection day.”

Under the department’s human-wildlife conflict policy, wildlife officers consider the bear’s behavior, age, sex and whether it’s a threat to human safety when determining when to relocate or lethally remove a bear. The department spends considerable time and resources each year to remove or relocate habituated bears to minimize the risk to people. However, relocating a bear doesn’t always solve the problem. Around half of all bears relocated will return to where they were captured, no matter how great the distance.

AZGFD urges Arizona residents to refrain from feeding wild animals to keep wildlife wild. Report aggressive or unusual animal behavior to the Arizona Game and Fish Department at (623) 236-7201 at any time, day or night.

Information provided by the Arizona Game and Fish Department and Bearizona

Bear cubs rescued after mother is euthanized by Courier Video