Designation of Route 66 as National Historic Trail questioned by council 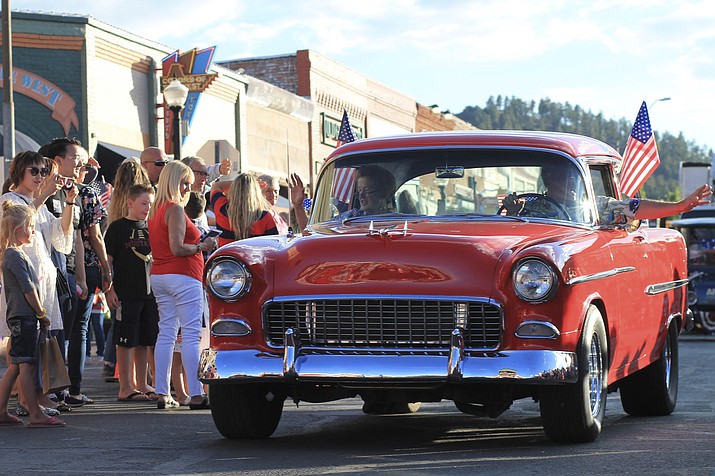 Williams City Council plans to meet with the Arizona Historic Preservation Association before deciding whether or not to support a bill that could designate Route 66 as a National Historic Trail with administration by the National Park Service. (Loretta Yerian/WGCN)

WILLIAMS, Ariz. —As a bill to designate Route 66 as a National Historic Trail moves to the Senate, supporters of the initiative are hitting the road in hopes of garnering support for its passage.

On July 12, David Zimmerman of the Arizona Historic Preservation Association addressed the Williams City Council about the latest developments of the bill and to encourage the council to get behind the initiative.

“This will be the 20th National Historic Trail nationwide,” Zimmerman said. “Some studies out of NAU have found that Route 66 is the second most popular reason to come to Arizona, after the Grand Canyon.”

H.R. 801 would amend the National Trails System Act to designate a trail of approximately 2,400 miles extending from Chicago, Illinois, to Santa Monica, California, as the Route 66 National Historic Trail.

The bill would provide a permanent program to preserve, promote and economically develop the highway.Proponents of the preservation of Route 66 are concerned that millions of federal dollars could be lost when the National Park Service Route 66 Corridor Preservation Program, passed in 1999, expires in 2019.

In early July, Route 66 was listed on the National Trust for Historic Preservation’s 2018 list of America’s 11 most endangered historic places.

Following the announcement of the proposed bill in November 2017, the Williams City Council was troubled by the language of the bill and the potential impact it could have on local control of Route 66 through Williams.

One concern for the council was the portion of the bill stating the United States could acquire land within one-quarter of a mile on either side of the trail.

Councilman Frank McNelly said the wording made it seem like the bill would authorize the purchase of land along the corridor by the federal government, and wondered if the NPS could use eminent domain to acquire any property it deemed necessary.

The council was also concerned with who would be in control of Route 66 in downtown Williams, and who would be responsible for the maintenance of the road.

The council passed a resolution December 14 opposing the proposed bill that would designate Route 66 as a National Historic Trail under the administration of the National Park Service.

Zimmerman addressed the council’s concerns at the July 12 meeting.

“I know that in the past there were some concerns that the National Park Service would be an agency that would have some kind of power along the route,” he said. “I just wanted to reassure you that H.R. 801 explicitly forbids the use of eminent domain by the NPS.”

Mayor John Moore said the city has had issues getting approval to upgrade Road 51, a well-traveled dirt road east of Williams. Road 51 was part of historic Route 66.

“I’ve been working with the US Forest Service and ADOT,” he said. “We’ve had quite a time getting work done on a road that is important to us.”

Zimmerman said the National Park Service is more like a partner in the road for historic qualities.

“The Route 66 organization that I work with is interested in the economic development, preservation and education. We just want to maintain the viability of the road as a destination,” he said. “The NPS would be more like a partner in the road for historic qualities.”

“If the NPS is going to be a partner with no say in it, it strikes me as interesting why they want to be a partner if they don’t have any say about it,” Moore said. “I’m just concerned because the more bureaucracy we add with the federal government — it doesn’t work so well.”

Moore said he and the council plan to meet with Zimmerman before signing any resolution or putting support behind H.R. 801.