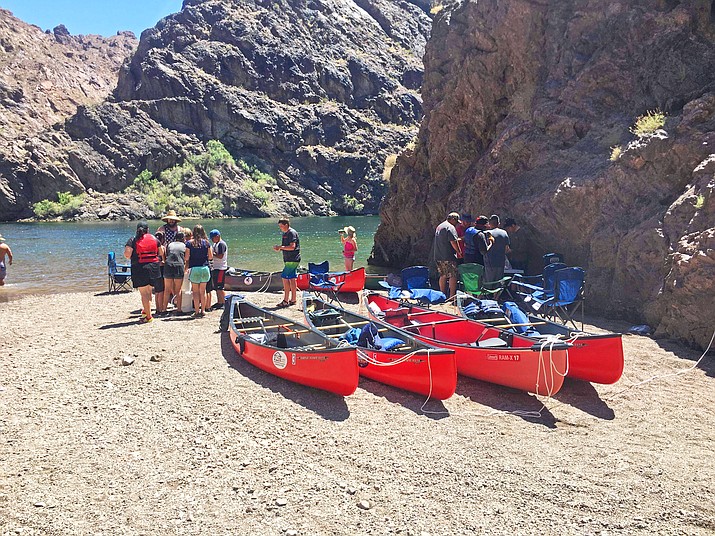 Ash Fork eighth graders and several teachers prepare to launch canoes for a three-day, two-night trip up the Colorado River at Black Canyon this summer. 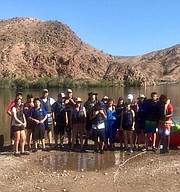 “A lot of the kids had never spent a night outside before, so this was a huge challenge for them,” said Ash Fork Unified School District Superintendent Seth Staples. 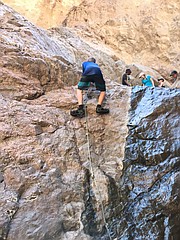 Students try their hand at rappelling.

Staples, for the second year in a row, led a group of 14 students and six teachers to the Black Canyon of the Colorado River for a three-day, two-night canoe expedition to celebrate their eighth grade promotion.

Located within Lake Mead National Recreation Area, the Black Canyon area of the Colorado River is known for its thermal and non-thermal springs with water temperatures ranging from about 55 to 136 degrees Fahrenheit. Many of the springs are large pools, and some are just seeps from small fractures in the rock walls. Many of these seeps are covered with a mixture of the mineral travertine and algae-type vegetation which ranges in color from green to orange.

“A lot of schools are doing Wet-and-Wild and going down to Phoenix, but we wanted to do something the kids probably wouldn’t ever do on their own,” Staples said.

Staples said the students borrowed equipment in 2017, the first year they made the trip.

“The first year was awesome, but we decided this year we wanted to be more prepared and have our own equipment,” he said.

To raise funds for the canoes and camping equipment, the students found sponsors and held fundraisers throughout the year.

“They worked really hard to get not just the canoes, but all the gear that goes with it so we can have it every year,” he said. “Everything was numbered; if it was the number one box, it went with the number one canoe. The kids were responsible for all of the equipment.

Staples said the canoe trip is an end-of-the-year opportunity for students with good grades and no referrals, and the school uses it as an opportunity for character building.

The students and teachers left at 4 a.m. on a Thursday to drive to the put-in on the Colorado River. They paddled eight miles upstream to their camp near Arizona Hot Springs.

to the Colorado River. Native Americans first came to the spring and it was noted on a map in in 1857 and 1858 by Lieutenant Joseph C. Ives of the U.S. Army Corps of Topographical Engineers. 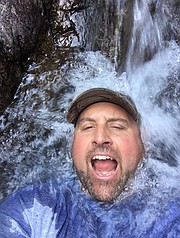 Ash Fork Superintendent Seth Staples gets into the action at Arizona Hot Springs.

After setting up camp and sleeping in tents the first night, the students traveled two miles upstream the next day to do more exploring.

“We did some mini rappelling, some small cliff jumping and worked on getting over our fears,” Staples said. “The kids were just great and it was just a blast to do it with them.”

The students returned to their camp that second night and were responsible for all the cooking and clean-up.

Staples said a lot of preparation went into the trip, which included practicing with the canoes in a pool environment.

“Some kids can’t swim, so we went to the Williams pool and practiced canoeing skills,” he said. “They had to wear personal flotation devices (PFDs) and learn how to tip a canoe over and get it back up.”

Staples said the students learned to work as a team and take on new challenges such as cliff jumping.

“The cliffs weren’t very big, but for some of the kids it took a long time to build that courage,” he said. “The other students cheered them on.”

Staples said since the experience has been so positive, the school is now looking at offering the program at the high school.

“We are trying to find a way to possibly do a fall trip and a spring trip now,” he said.