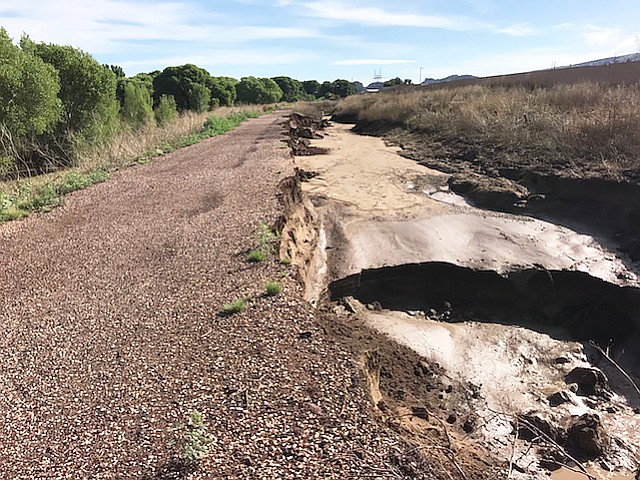 A microburst during a storm caused flooding that tore through the Peavine Trail in Prescott causing significant damage. (Rod Hurlbert/photo)

An old railroad bridge that has endured along the historic Peavine route for more than a century was no match for the intense rainstorm that moved through the area Wednesday, July 18. About six feet of the 1880s/1890s-era bridge was washed out Wednesday afternoon, July 18, leaving a gaping hole

A microburst that deluged Prescott July 18 tore through the Peavine Trail. (Rod Hurlbert/photo)

on the popular Rails-to-Trails route that passes by Watson Lake through the Granite Dells.

By early that morning, Baynes and other recreation employees were out assessing the damage, which was considerable.

Along with washing out the section of the old railroad bridge, the raging water gouged a virtual canyon through the Peavine route near the Sundog Ranch Trailhead. And the routes leading to the damaged area were covered with sticky mud.

The damage prompted the city to close the trailhead to the public early Thursday. A news release from the city stated, “The main trailhead, located off Sundog Ranch Road, just north of Prescott Lakes Parkway, is closed indefinitely as city crews assess damage and work on a plan for restoration.”

Late Thursday, Baynes said plans were underway for construction of a temporary alternative trail around the storm damage. The route will have to skirt a hole near the trail’s restroom and picnic tables that measures about 12 feet deep and 40 feet wide.

The amount of water that moved through the area was highly unusual, according to Baynes. “We’re probably talking a 500-year event,” he said.

The microburst was relatively isolated, Baynes said, noting that the damage appears to be limited to 1,000 feet (about 0.19 of a mile) of the Peavine.

Prescott Trails and Parklands Coordinator Chris Hosking, who rode the entire stretch of the Peavine Thursday morning, said the northern section was largely unharmed by the storm.

The city’s news release states that much of the Peavine is still accessible via the Watson Lake trail connection and the Peavine North trailhead, 5599 Side Road, off Granite Dells Parkway.

Thursday morning, a number of people riding and running along the trail were surprised by the damage.

As cyclist Dave Fizzell rode along the deep channel that now borders a stretch of the trail, he said he had never seen such extensive damage in the 35 years he has lived in the area.

And Robyn Hazlewood, who was out riding her bike on the northern section, stopped and surveyed the washed out bridge.

“I’ve been riding this trail for 10 years, and I’ve never seen anything like this,” she said.

Baynes agreed, noting that he was not aware of the railroad bridge ever washing out before.

Both Baynes and Hosking said it was too early Thursday to guess the cost of repairing the trail.

“It’s going to take a lot of materials to fix this,” Hosking said. “We’re going to have to talk to engineers and public works about how we’re going to deal with this.”

Baynes added that the repairs would likely require the importation of soil to fill in the holes.

Still, he said the old railroad bridge likely would be salvageable. “It appears that the piers (the beams supporting the bridge), and the abutments (the approaches to the bridge) held up,” he said.

Since the late 1990s, the 6-mile Peavine has been among Prescott’s most popular recreational trails. It is designated as a National Recreation Trail.