What's happening to the aspens? 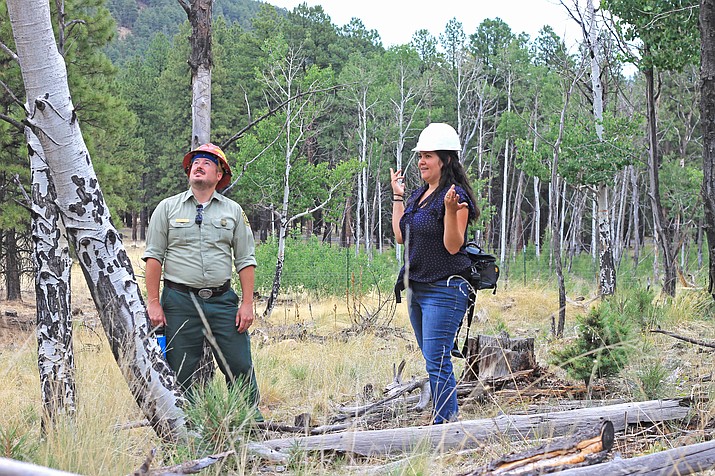 WILLIAMS, Ariz. — It was another dry day in northern Arizona, and at 6,500 feet, on the Spring Valley Road in Kaibab National Forest, the aspen trees should be quaking in the slight breeze and throwing a shadow over the ground. But this stand is different, gray bare trunks shoot high into the sky where just a thin canopy of leaves flitter about.

Entomologist Amanda Grady studies a stand of aspen trees off of the Spring Valley Road in Kaibab National Forest. The stand has die-off related to an infestation of oystershell scale insects. (Wendy Howell/WGCN)

Amanda Grady, an entomologist with the US Forest Service Forest Health Division, pulls back a branch of an aspen sapling revealing a trunk encrusted with scales.

“Under each one of these little scales there could be 30-100 eggs,” Grady said.

Aspen, one of the few deciduous trees to grow in the dense ponderosa pine forests of northern Arizona, are a symbol of persistence in the mountains. Their chalky-white trunks and vibrant yellow leaves bring nature lovers from around the state to view them each fall. The characteristic shimmer of their heart-shaped leaves gives them their nickname, the quaking aspen.

In 2013, foresters noticed the aspen of Arizona were being silenced. While the trees — which are on the lower end of the distribution range — have been battling conifer encroachment, elk browsing and drought, this new assault has land managers concerned.

“We have just 2,000 acres of aspens on the south zone of the Kaibab,” said Josh Giles, silviculturist for the Williams and Tusayan ranger districts of Kaibab National Forest. “That’s not a whole lot. We want to proliferate them, but right now we’re just trying to keep them.”

Aspens have been under assault by elk for years on the Kaibab and Coconino National Forests and to help preserve the few stands that have survived, foresters have surrounded many of the trees in fence enclosures and removed the conifers near them.

But the latest attack on the aspens, oystershell scale, doesn’t stop at the boundary of the fences.

“We don’t know a lot about it,” Grady said. “Sometimes its patchy how this scale is, it’s not dispersing very far.”

Scale insects, like oystershell, grow beneath a waxy cover and permanently attach to the host plant as a parasite. The secreted waxy coat is a defense that resembles fish scales, hence the name oystershell scale.

Most scale insects are parasites to specific plants and feed directly on the plant’s vascular system. Scales are often found in crop plants and the crusty shell makes pesticides difficult to penetrate.

Oystershell scale is new to the western forest landscapes. Typically seen in urban environment, oystershell scale is now proliferating through the forests of Arizona. It is one of the most damaging insects for deciduous trees, developing on the bark of trunks and the limbs of trees such as ash, poplars, willows and aspens. The brown scales are about 1/8 inch long and are in the general shape of an oyster’s shell. The shells huddle together and create a crust that often encircles the trunk of the tree.

In many places on the Kaibab and Coconino forests, the patches of bare and dying trunks are noticeable peering up through the smaller green regrowth, and some stretch for acres.

“The eggs hatch in the spring and they start to crawl over and settle down,” Grady said. “They hunker down and put their piercing, sucking mouth part in and start sucking out the juices.”

“Once it kills those tree cells underneath that bark, it opens the wound up to pathogens,” she said.

Individual aspen trees rarely live over 100 years, but the trees are actually part of one large organism with an extensive underground root system. The aspen clones as each root system is called, can live to be thousands of years old. The oldest stand of aspens is found at Fishlake National Forest near Bryce Canyon National Park. It is believed to be close to 80,000 years old, although the average is 5,000-10,000 years old.

Aspens are unique in other ways too. Besides the asexual reproduction from roots, the trees can also reproduce sexually as a flowering plant, especially after a fire or other disturbance. The trees also have a thin photosynthetic green layer beneath the thin white outer bark which allows the plant to synthesize sugars and continue growing even during the winter when other deciduous trees go dormant.

Grady, Giles and other foresters have been working together to find ways to combat the oystershell scale before the aspen groves disappear in Arizona.

“This has been an urban ornamental problem in many areas, but not a wild land problem,” Grady said.

Oystershell scale has led to the decline in aspen stands in northern Arizona. (Wendy Howell/WGCN)

Grady said most of the studies of oystershell scale have been on high economic crops such as apple orchards. She said the scale has a few biological controls but pesticides have been the most effective. In the urban environment, the organism has been controlled in the early crawler state using horticultural oils that suffocate them, or by pesticides that poison the sap of the plant.

“We are hoping to build some recommendations or guidelines on how we start to deal with this out in the wild lands,” Grady said.

The USFS is just beginning to experiment with treatments. Grady and Giles led a work project in the fall of 2017 where a group of volunteers spent a day physically removing the scales by scrubbing them from the trees, however, a year later most of the trees affected have died.

“We had sponges and wiped the heck out of these aspens all day, but there is still so much left,” she said. “It is totally unrealistic in the wild.”

Giles believes the suppression of fire on the forest landscape over the past century has limited the regeneration of aspen in Kaibab and Coconino National Forests.

“Normally this is an early seral species, so after a large disturbance event we would get a proliferation of these seedlings,” Giles said. “But because of the lack of fire, that return interval is kind of skewed now.”

Giles said because of the limited regeneration of aspen, the browsing by elk can wipe out an entire stand.

“They are ice cream to elk and other ungulates,” Giles said. “When they come through, they camp out in a little stand.”

The importance of aspen

Giles said local land managers are placing the preservation of the aspen stands as a priority. Aspen forests are preferred for certain wood products such as matchsticks, chopsticks, fiberboard and decorative gifts.

The aspen forests are also essential wildlife habitat and are close to riparian areas in terms of biodiversity richness. Songbirds, woodpeckers, birds of prey and game birds make aspen groves their home.

But Giles said the biodiversity found in aspen groves is not the only factor in working to preserve them, the recreational enjoyment by people is also important.

“We aren’t just treating them for the charismatic macrofauna,” Giles said. “People like aspen too.”