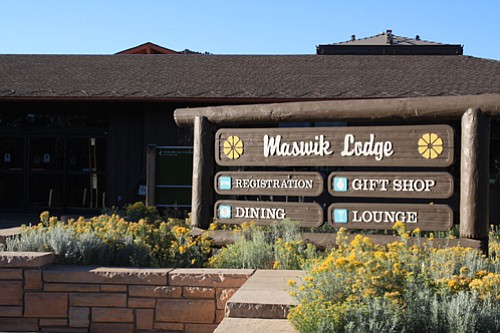 Maswik Lodge as it stands today was built in 1971. (Photo/NPS)

GRAND CANYON, Ariz. — With a history dating back to the Fred Harvey era, Maswik Lodge has been a staple at the Grand Canyon since 1927.

Harvey originally had a motor lodge constructed on the site, about a half-mile from the rim, to accommodate visitors who had begun traveling in their own vehicles as opposed to trains or stage coaches. The company eventually added 20 cabins in the 1940s and had an additional 22 moved from Bright Angel Lodge to accommodate growing tourism to the Grand Canyon.

After nearly 40 years, most of the original cabins and motor lodge were demolished in favor of a more modern hotel structure in 1971, although the original stone pillars are still standing as part of the current complex.

Because the Maswik Lodge complex has outlived its intended lifespan, Grand Canyon National Park proposes to demolish the existing structures and build a new lodging complex in Maswik’s existing footprint.

According to the National Park Service, other existing infrastructure at Maswik, such as sidewalks and roads, is also aging, in poor condition, or not compliant with current laws, codes and regulations, including the Americans with Disabilities Act of 1990. The configuration of the lodging complex also contributes to poor traffic circulation and conflicts between pedestrians and vehicles.

To correct these issues, the NPS is proposing to demolish the existing Maswik Lodge buildings and construct up to five new buildings within the existing site footprint.

The new buildings would provide up to 120 rooms, including some rooms with kitchenettes to better serve families. The proposal also includes reconfiguring the site; improving aging infrastructure, such as roads, parking, and sidewalks; and improving pedestrian and vehicular circulation to address safety concerns. Additionally, the NPS is proposing to construct two new sections of road, about a half-mile in total, in the vicinity of Maswik Lodge to provide an alternate route from Grand Canyon Village to Rowe Well Road and reduce traffic at the lodge.

NPS is seeking public comment on the proposal, which will be detailed at a public meeting from 4:30 to 6 p.m. July 18 at Shrine of the Ages. More information, including a newsletter on the specifics of the proposed action, is available on the NPS Planning, Environment and Public Comment (PEPC) website at http://parkplanning.nps.gov/MaswikSouth.

Public comments on the proposed action will be accepted for 15 days (closing July 27, 2018). During this time, any individual or group can submit scoping comments electronically on the PEPC website, in person at public scoping open house events, or via mail to Superintendent, Grand Canyon National Park, Attn: Maswik South EA, PO Box 129, Grand Canyon, AZ 86023. The preferred method for submitting comments is on the PEPC website listed above.

Comments that provide insights about the project purpose and the park’s current proposal are particularly helpful, and new ideas and proposals are welcome. Following the public comment period, the NPS will analyze and consider all feedback and begin preparation of the Environmental Assessment (EA).

The NPS will not select an alternative for implementation until after the analysis of the alternatives and their potential impacts has been completed within the EA. There will be a second opportunity for public comment on the EA in fall/winter 2018.

Xanterra South Rim, LLC. currently operates the Maswik South under a concession contract with the NPS and would complete this project under the terms of that contract.