Artisan Elroy Natachu Jr. uses traditional weaving methods to link Zuni past and future generations
Weaving the past into the future 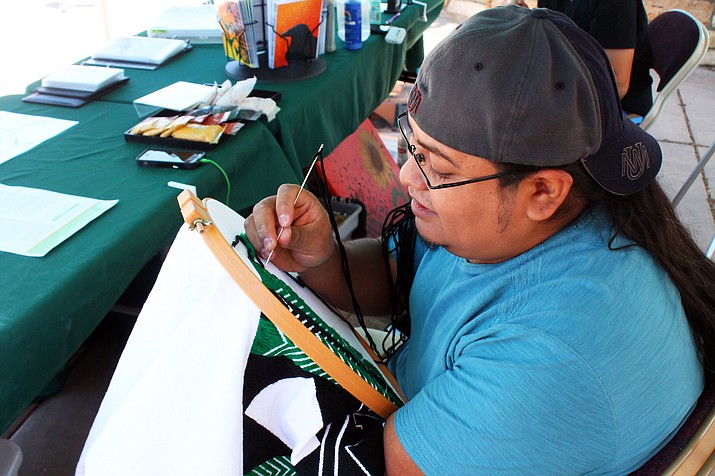 Natachu embroiders a custom order, which will take him almost a year to finish. (Erin Ford/WGCN) 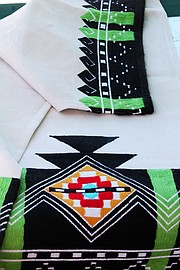 GRAND CANYON, Ariz. — Like many agrarian tribes of the American Southwest, the people of Zuni Pueblo dedicate time, energy and art to praying for and praising the life-giving rains that allow the tribe to thrive in an arid climate.

Symbols both ancient and modern can be found in many aspects of life, but one of the most traditional is the tribe’s textiles, including garments. Elroy Natachu Jr., a painter and textile weaver, is making a concentrated effort to keep the old ways of weaving in the present so they can be passed along far into future generations.

Today, Natachu is working on hand-weaving a manta, a garment worn by Zuni women. The manta consists of a large, woven cloth in white or black typically draped over one shoulder and tied with a sash around the waist. It was also worn as a cape. Natachu said the mantas were worn alone, exposing the women’s shoulders and legs, until the Spanish occupied the region and insisted they wear a sheath underneath the manta to provide more modesty.

Natachu said the dresses were once everyday wear for the women, but are now reserved for special occasions.

“It was everyday clothing at a point, but nowadays everyone dresses a little more modern, so it’s only (worn) during social dances or religious activities,” he said.

On the white mantas, which have the more elaborate embroidery, Natachu said the main colors are always green and black. He explained that during planting season, the tribe constructs two willow prayer effigys as offerings to the spirits to bring their water — one represents a male and the other a female. Those effigys, always a pair, are represented by the green.

“We were an agricultural society, so we were always praying for rain,” Natachu said.

The thick black border along the bottom represents the underworld, rich with deep moisture. Natachu said the white cloth has several interpretations, 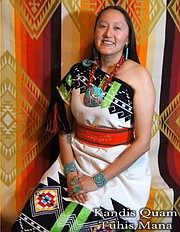 depending on the different villages, but can often be seen as a fresh field, ready for planting.

The intricate details seen in white also represent life-giving water in a wave pattern and a bank of storm clouds, while the larger diamond pattern filled with red and turquoise accents symbolizes a cloud house — the homes of the spirits and ancestors. He described the cloud houses as windows, and said frequently cloud patterns are placed inside, along with insects that are tied to moisture, like dragonflies or butterflies, or Kachina faces. Natachu said animal symbols are typically not placed into the houses because if they’re not exactly correct, an animal might be born somewhere in the world missing any parts that were forgotten.

The embroidery along the top is thinner, but also represents the clouds bringing rain down to the Earth.

“It’s all very stylized,” he said. “But it’s always telling a story through the textiles.”

Natachu said his embroidery process is similar to that of a printer. He goes up and down the cloth in counted increments, and each increment has to be meticulously counted, because the design is perfectly symmetrical. Natachu doesn’t have designs drawn out on paper, nor does he have a list to remind him of how many stiches to take before he needs to switch gears. Everything is done inside his head. It will take him almost a year to finish, weaving for a good portion of the day.

“If you’re off by even a little bit, you have to cut it, rip it out and start all over,” he said. “There’s really no going back, it might cause a lot of destruction in the pattern. I have to remember the count for every stich that I do. It’s like a giant math equation.”

Unlike most of western society, where needlework might be considered solely a woman’s hobby or duty, among the Zuni, it is an art practiced only by the men.

Traditionally, the art of weaving, especially on large cloths, was considered an act of procreation, with the loom representing the female and the bat used to secure the threads represents the male.

Natachu said in a lot of pueblo communities, traditional textiles were all woven with spun cotton, which represented the clouds.

“They were literally turning clouds into workable materials,” he said. “They were actually wearing clouds.”

Keeping the old methods and the old stories alive is an important undertaking for Natachu, who has been embroidering and learning the techniques since he was about five years old. There was one point in Zuni history, he explained, when the craft of textile weaving and embroidering didn’t exist in the pueblo, or was practiced in secret. Natachu said the Spanish often confiscated the finely-produced textiles for taxes, and so the craft became nearly extinct. It was only after the Spanish occupation eased that traditional weaving saw a resurgence, thanks to the Hopi Tribe, who had managed to maintain the practice and then reteach many of the pueblos.

Natachu said the textile craft is very sought-after, since there are still only a relative handful of artisans who know how to do the weaving and embroidery the correct way.

“There’s a handful of us in the New Mexico and Arizona communities that supply most of the pueblos with textiles that are worn during ceremonies or social dances,” he said.

Natachu and his cousin, Kandis Quam, present cultural preservation courses in many communities, where they display traditional arts, crafts and foods. The pair teaches younger generations — and even come older tribal members — about how and why things were done a certain way, so the traditions aren’t lost.

“We encourage youths to learn these crafts and learn the meaning of them, because a lot of people, especially the older generations, may take these crafts for granted, thinking they can be done really fast,” he said. “With modernization, a lot of the colorations have started to change. We’re trying to reteach the communities why things were done in certain ways.”

Natachu said the coloration was often based on oral traditions and stories, which paid homage to the tribe’s emergence from the underworld and migration and interactions with people. It’s a way of storytelling, he said.

“It helps bridge that gap, so it creates more of a talking space for the younger generation to ask questions, and even some of the older generations that don’t know all of the history of Zuni and the religion itself,” he said.