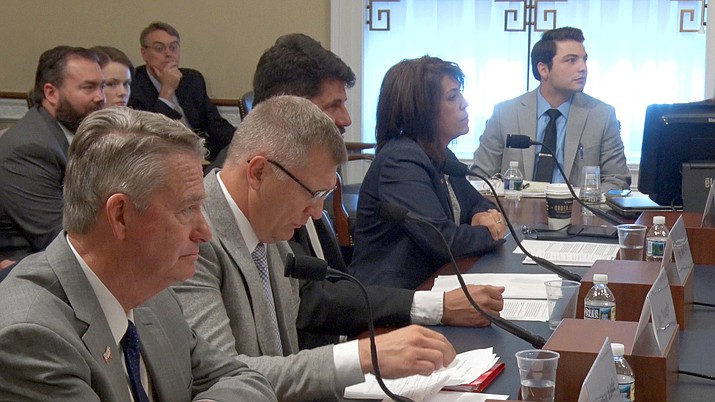 Arizona Farm Bureau President Stefanie Smallhouse, right, sits next to Erik Molvar of the Western Watersheds Project at a House hearing where they disagreed on the benefit, or harm, caused by grazing on public lands. (Pat Poblete/Cronkite News)

WASHINGTON — The president of the Arizona Farm Bureau told a House panel July 12 that regulations meant to help the environment are actually doing the opposite, in part by harming ranchers who are in the best position to help.

In testimony to a House Natural Resources subcommittee, Stefanie Smallhouse said that laws meant to protect and conserve wildlife, like the National Environmental Policy Act and the Endangered Species Act, have led to a “dysfunctional regulatory system” and spawned “frivolous lawsuits” that stymie conservation efforts.

“The NEPA process to approve necessary conservation projects has been slowed to the point of complete paralysis in many areas due to obstruction and threat of litigation by radical environmental groups,” said Smallhouse, who was testifying on behalf of the American Farm Bureau.

“NEPA is a necessary analysis, but it was not, it was not intended to end grazing in the West,” she said.

But others at the Subcommittee on Federal Lands hearing said the ranchers are creating more problems than they are solving, all at a grazing fee rate that they claim is heavily subsidized by American taxpayers.

“Both the Forest Service and the Bureau of Land Management spend much more on administering the grazing program than they receive in the actual grazing fees,” said Rep. Ruben Gallego, D-Phoenix. “Grazing on federal lands is highly subsidized and costs American taxpayers millions of dollars every year.”

The Bureau of Land Management oversees about 11.5 million acres of public grazing lands in Arizona alone, according to the agency.

The grazing program does more than hurt the taxpayers, said Erik Molvar, executive director of the Western Watersheds Program. He said that livestock grazing on public lands is doing irreparable harm to wildlife, using the example of cold-water fish native to the western United States whose stream habitats are trampled and degraded by grazing livestock.

“You can look at the number of endangered or threatened runs or populations of trout and salmon in the West to see that livestock grazing is having a significant negative effect on our fish fauna,” Molvar testified.

But more of the committee in attendance were like Rep. Tom McClintock, R-California, who was quick to recognize the benefits ranchers provide on the federal lands they graze.

“It (grazing) puts our public lands to productive use, it provides an important management tool for fuel reduction and fire prevention,” said McClintock, the chairman of the subcommittee. “It supplements and extends our ability to superintend our vast public land holdings, and it provides revenues and livelihoods for the surrounding communities.”

Smallhouse, a fifth-generation rancher from Gilbert, said the beef industry in Arizona contributed $1.2 billion to the state’s economy in 2012. Just as important, she said, is the fact that ranchers provide nearly $800 million worth of land management services nationally in the course of tending their herds.