No fireworks? Fourth of July festivities still a go in Williams 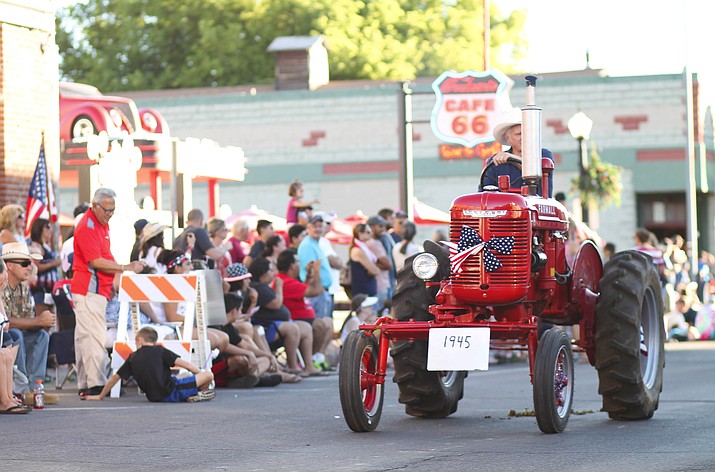 Residents and visitors enjoy the 2017 Fourth of July parade in downtown Williams.

Despite the cancellation of this year’s fireworks, the city of Williams and several nearby communities plan to celebrate Independence Day with a bang.

For Williams, the city has organized a parade that begins at 6 p.m. on Historic Route 66. This year’s theme is Parade of Stars and will be made up of floats, tractors, horses, walking entries and tons of red, white and blue as residents — plus visitors — line the street to celebrate America’s independence.

Before the parade begins, however, visitors can see annual Tractor Show at Second Street and Route 66. The Williams Aquatic Center will host a free swim from noon until 4 p.m., and the United Method Church is hosting its annual Old Time Ice Cream social beginning at 2 p.m. until all the ice cream is gone. Also at 2 p.m. is a BBQ fundraiser for the Veterans Day banquet at the Visitor Center stage.

There will be a community prayer at 11 a.m. at the Visitor Center stage.

In addition, those looking to experience a vintage steam train ride over the holiday weekend can take advantage of the Grand Canyon Railway’s Steam to the Canyon and visit the animals at Bearizona.

The community of Parks has numerous things planned to celebrate the Fourth of July. Beginning at 7 a.m., the Maine School PTO is hosting a pancake fundraiser breakfast at the school gym.

The parade in Parks will also mark its 30th year with its original founders serving as marshals.

Raffle tickets are being sold to benefit the Rangers Youth Football program. They are available at the Parks Feed and Mercantile from 9 am. to 1 p.m.

Parks in the Pines General Store at the corner of Old Route 66 and Spring Valley Road will have a kid’s bounce house from 11 a.m. to 3 p.m., a kid’s watermelon eating contest at 11 a.m., a balloon toss at 11:30 a.m. and numerous prizes. There will be handcrafted knives on sale to raise money for the Parks Area Connection from 11 a.m. to 1 p.m.

The Parks 30th annual Fourth of July parade begins at 1 p.m. This year’s theme is Blasé to the Past and is sponsored by Parks in the Pines General Store. Entry forms are available at the store. The parade begins at the intersection of Old Route 66 and Park Road and process west toward Spring Valley Road.