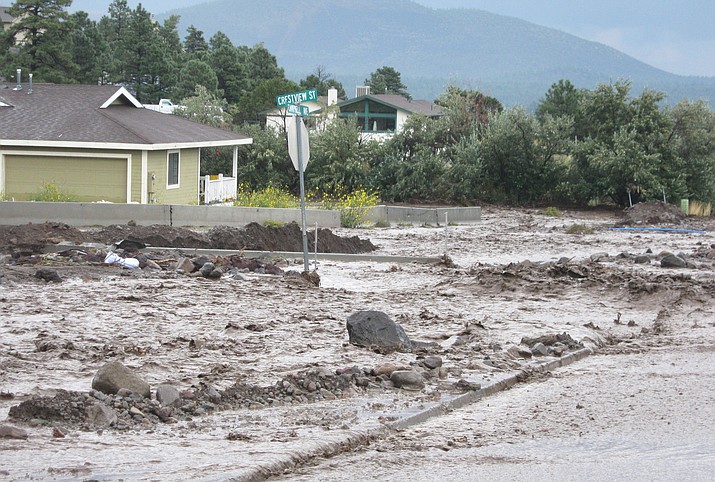 Coconino County is leading a pre-disaster flood planning effort in Williams with a grant from FEMA. The county is using their experience with the 2010 Schultz Fire as a model for the plan.

In 2010, an abandoned campfire sparked the 15,000 acre Schultz wildfire near Flagstaff, requiring the evacuation of 650 residences and requiring air tankers, helicopters, engines, water tenders and nearly 1,000 hand crews to extinguish.

Fire personnel deemed it fortunate that no homes were burned or lives lost during the fire, but it was the weeks, months and years following the fire when the most damage was done as the financial and emotional toll hit the community.

The subsequent flooding was far more catastrophic to the community than the fire itself and resulted in over $130 million in economic impacts, the flooding of dozens of homes and the loss of a child in the debris flow.

“I can’t begin to tell you about the level of fear and anxiety that overtook that community,” said Lucinda Andreani, Coconino County director of Public Works.

Andreani said there were 25 flooding and debris flow events the first year, 20 the second year and 14 the following year. The summer following the fire the area received nearly 10 inches of monsoonal rain, and it was during one of those storms that a 12-year-old child was killed.

Residents said the water and ash sounded like a jet engine as it came off the mountain carrying boulders, trees and other debris into the neighborhoods.

Because of this incident, the Federal Emergency Management Agency (FEMA) recently gave Coconino County a $200,000 grant to conduct a post-wildfire flooding and debris flow study to evaluate the entire county and determine high-risk areas.

According to Andreani, Williams made the top of the list.

Andreani said FEMA chose to allocate the money to Coconino County for two reasons: one is the abundance of wildfires and flash flooding that has already occurred in the county, and two is the experience county officials have gained since the Schultz fire disaster.

“They watched us manage Schultz and we did a scientifically based mitigation plan,” Andreani said of FEMA. “They were impressed with the knowledge base we developed.”

FEMA plans to use the Coconino County study as a model for other counties dealing with wildfires and post-fire flooding. The study includes Williams and the Fort Valley area near Flagstaff.

“What they are trying to do is have communities get out in front of it and plan for it,” Andreani said. “They want the modeling developed. They hoped this would inspire communities to get together and say ‘we have a problem,’ and address it.”

Williams was selected for the study for the following reasons:

The county hired JE Fuller Hydrology and Geomorphology to look at steepness of mountain slopes, potential severity of fire, community infrastructure and other values at risk in the areas.

The company worked with the AZ Geological Service and the U.S. Forest Service (USFS) before conducting their hydrological analysis. The analysis looked at what happens when a rainstorm hits the mountain focusing on how much water flows off, where the water goes, how deep the runoff is and how fast it is moving.

“So that was a big step in our project model,” said Joe Loverich, engineer with JE Fuller Hydrology and Geomorphology Inc. “If it rains today on the mountain, with the forest in its present condition, what happens? If it burns and then it rains, what happens? What’s the change in risk essentially?”

Loverich said they found that for a 100-year event, which is an event that is categorized as having a 1 percent chance of occurring in a given year, 147 buildings within Williams could have a greater than a foot of flooding. If there was a 100-year event post-wildfire, 515 buildings would flood.

“I think the story is really told with a 10-year event,” Loverich said. “Our 2-10 year events are your typical heavy monsoon storms. What we found is that a 10-year can jump from 41 buildings to 268. The impacts are large.”

Loverich said the hydrologic study found that thinning of the forest followed by a burn would significantly decrease the impacts to the city.

“Not only does forest health reduce the chance of the fire starting,” he said. “But if the fire burns in a healthy condition, those post-fire impacts will be significantly less than if it burns in its current condition.”

The light blue areas are the existing flood plain in Williams under normal conditions. The white striped lines indicate potential flooding post-fire. The study found that many areas in Williams could be one to five feet under water.

Working with the USFS

The Forest Service has already treated 700 acres with chainsaws, 200 acres with heavy equipment and completed prescriptions for 3,500 acres available as timber sales, however, the complexity of the terrain makes slow going for the crews.

Forest Service representatives were notably absent from the pre-disaster meeting because of the budget shutdown, but Andreani said a key component of the planning is working with the USFS to quickly restore forest health on Bill Williams Mountain.

Andreani said the county has secured a grant from the Forest Service to fund pieces of the initiative, which includes the pre-disaster plan and the county’s focus of forest restoration on Bill Williams.

The county is also hopeful in finding the resources needed to fund stewardship contracts with the Forest Service to accelerate the forest thinning and restoration on the mountain.

“We’re actually looking at taking a prominent role in this to move that agenda forward, particularly where there are flood risks,” Andreani said.

On Jan. 22, employees from Coconino County organized a community meeting in Williams where nearly 100 stakeholders participated in the first phase of pre-disaster planning for Williams.

The plan is funded by a U.S. Forest Service Secure Rural Schools Title II Rural Advisory Committee Grant to defer $104,000 in project costs. The pre-disaster plan will cost about $145,000 with the difference coming from the Coconino County Flood Control District.

The county encouraged the stakeholders to provide their input about the potential impacts of flooding to Williams infrastructure. They were asked to look at the transportation corridors, critical facilities, public roads and utilities, and franchise utilities as well as identify possible improvements to increase resiliency.

This meeting focused on the pre-disaster plan and the agenda included break-out sessions to discuss potential impacts to area transportation, the water supply, utilities, and other critical infrastructure.

Andreani said the meeting was the first in a series of planned meetings with stakeholders and the full pre-disaster plan for Williams is slated for completion in the fall of 2018.