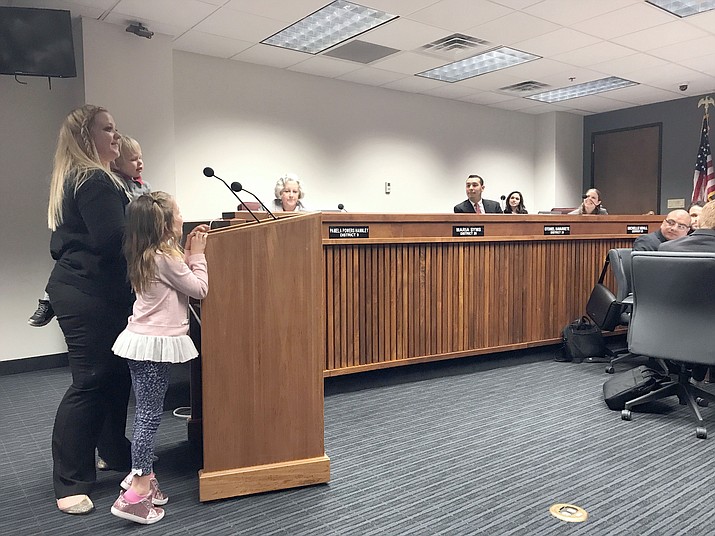 Clancie Kazee brought her children with her to tell Arizona legislators why the House Health Committee should support HB2127 to protect KidsCare funds.

WASHINGTON — Health insurance for thousands of low-income children in Arizona’s KidsCare program would be preserved, even if federal funds are yanked, under a measure approved Jan. 18 by an Arizona legislative committee.

The House Health Committee voted in favor of of HB 2127, the bill designed to prevent a funding freeze for KidsCare, the state’s version of the Children Health Insurance Program, or CHIP.

National funding for CHIP remains in jeopardy as Congress wrangles over a federal spending bill and a federal government shutdown looms. Arizona law automatically freezes funding for KidsCare if federal funding lapses, but HB 2127 would remove the automatic freeze.

Thursday’s measure, however, calls for the Legislature to combine federal and state funds to keep KidsCare going. The program serves nearly 24,000 low-income children in Arizona.

The bill now goes to the Rules Committee before moving to the full House for a vote.

Clancie Kazee brought her children, 2-year-old Jameson and 6-year-old Callista, to persuade lawmakers to support the bill. Kazee is a full-time nursing student; her husband is an independent truck driver who doesn’t have health insurance. Without KidsCare, Kazee said, she would have to leave school and work full-time to afford private insurance.

Kazee, in an interview before she spoke to committee members, said that without insurance, surgery Jameson had as a 1-year-old would have been out of financial reach. Tubes were inserted in his ears to stop chronic, painful ear infections.

“We drive older cars,” Kazee told committee members. “I don’t get my nails done, I don’t get my hair done. KidsCare offers us something we can afford.”

A life without the program would mean deciding what bills the couple could afford to pay and which ones would have to wait, she said.

“These are working families,” Richardson said.

Rep. Jay Lawrence, R-District 23, questioned how much it would cost Arizona to take on the responsibility of paying for the program but said his heart was melting as he listened to people talk about needing KidsCare.

Still, the Scottsdale lawmaker was optimistic the federal spending bill will be passed.

“If evil things do happen, we will have an opportunity, if we pass this bill, to determine the amount of money we’re willing to spend,” Lawrence said.

The committee, with one member absent, passed the measure 8-0.

Rep. Heather Carter, a Republican representing north Phoenix’s District 15, framed the measure as giving Arizona lawmakers autonomy without worrying whether the federal government will leave the state’s CHIP funds in the lurch.

“It just allows us to make the decision,” Carter said. “Maybe they will figure it out in the next 24 to 48 hours. You can’t really predict what the federal government will or will not do.”