Phantoms persevere: ‘the best basketball we have played in two years’ 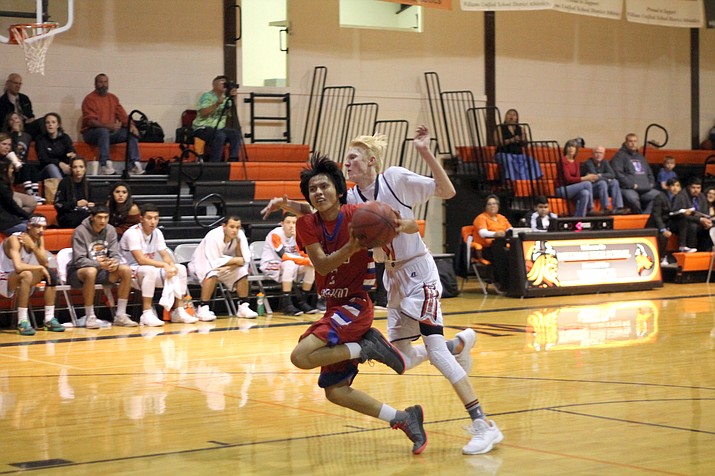 Aleryn Reid goes up for a layup after a breakaway steal. 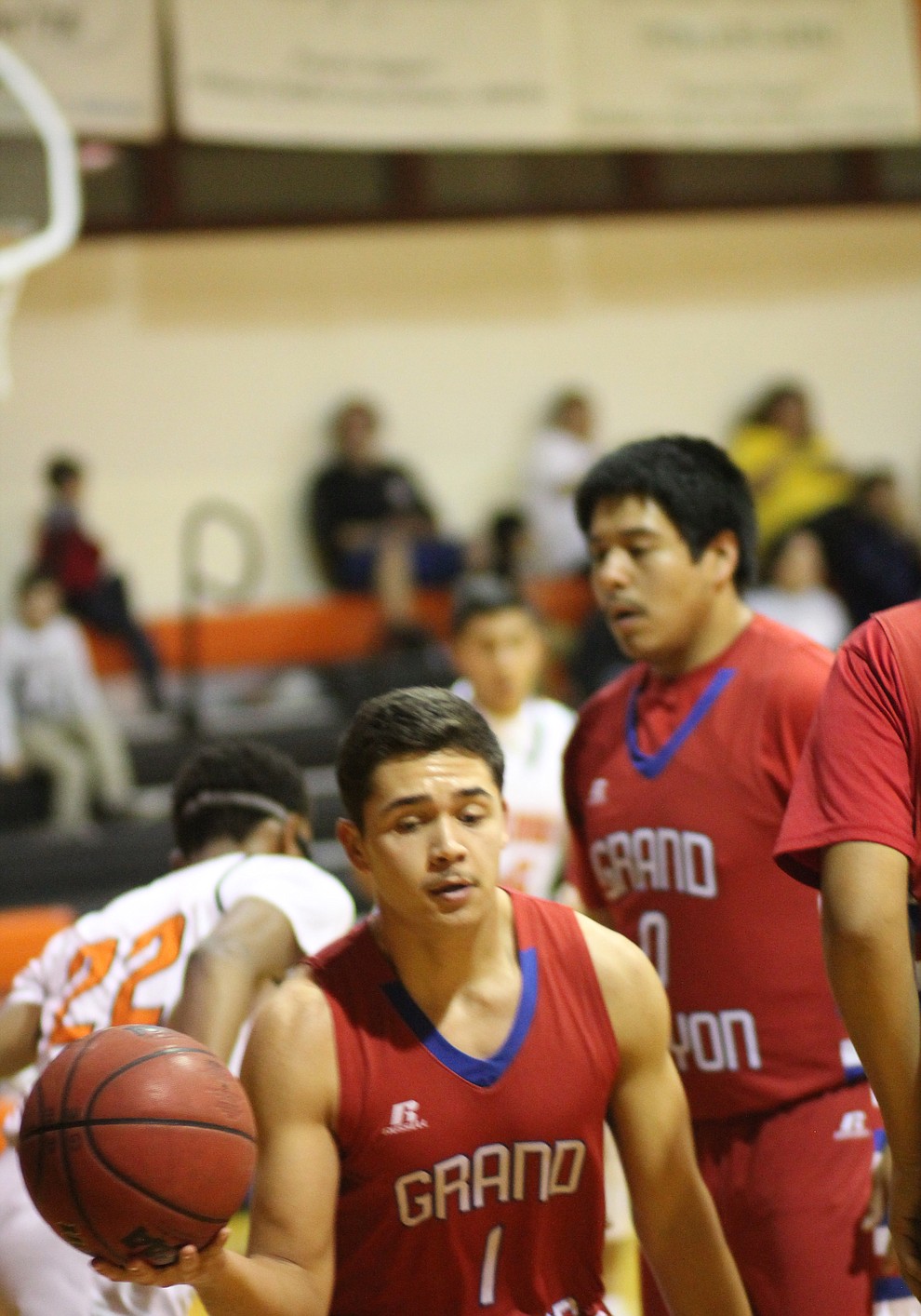 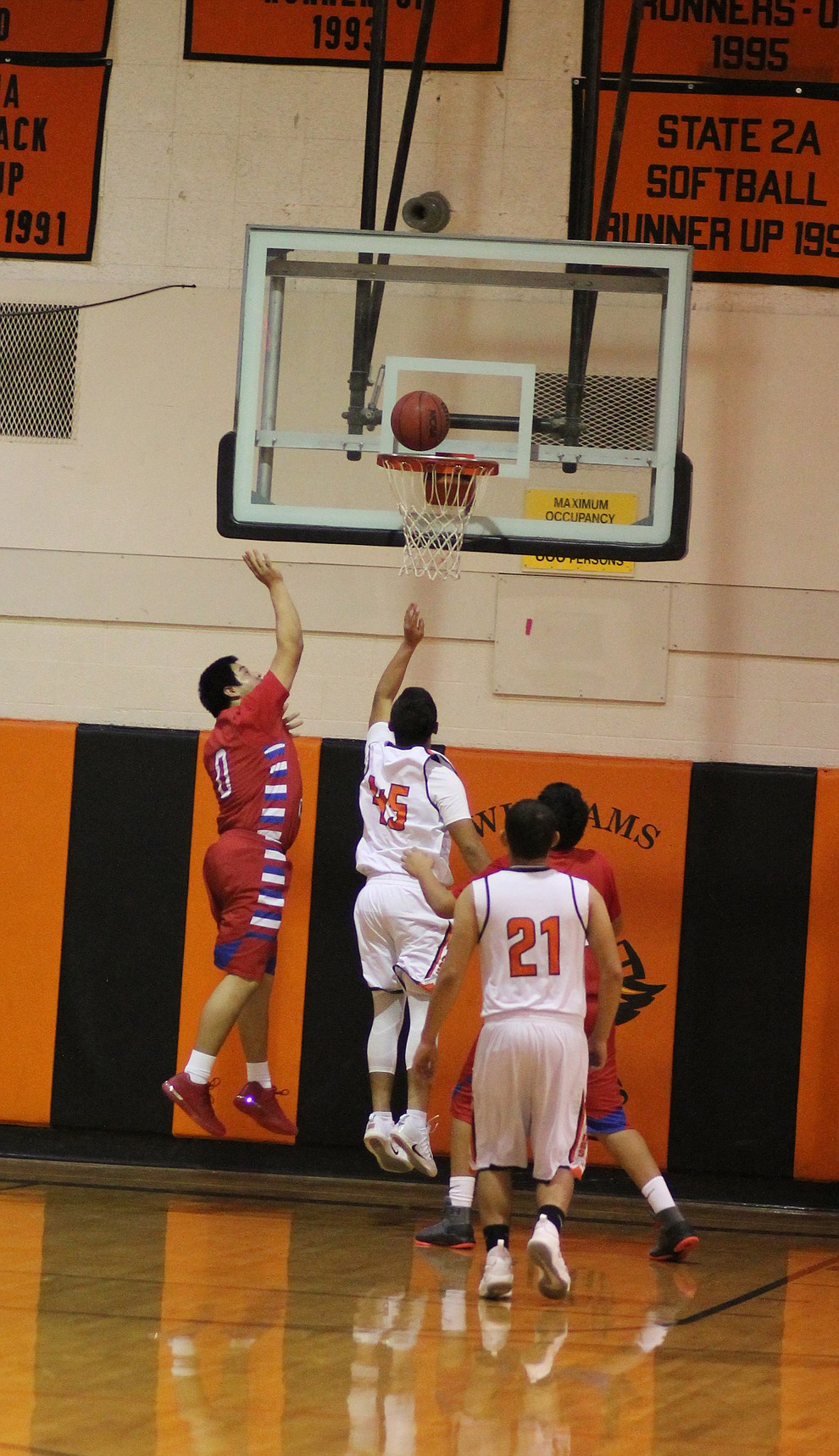 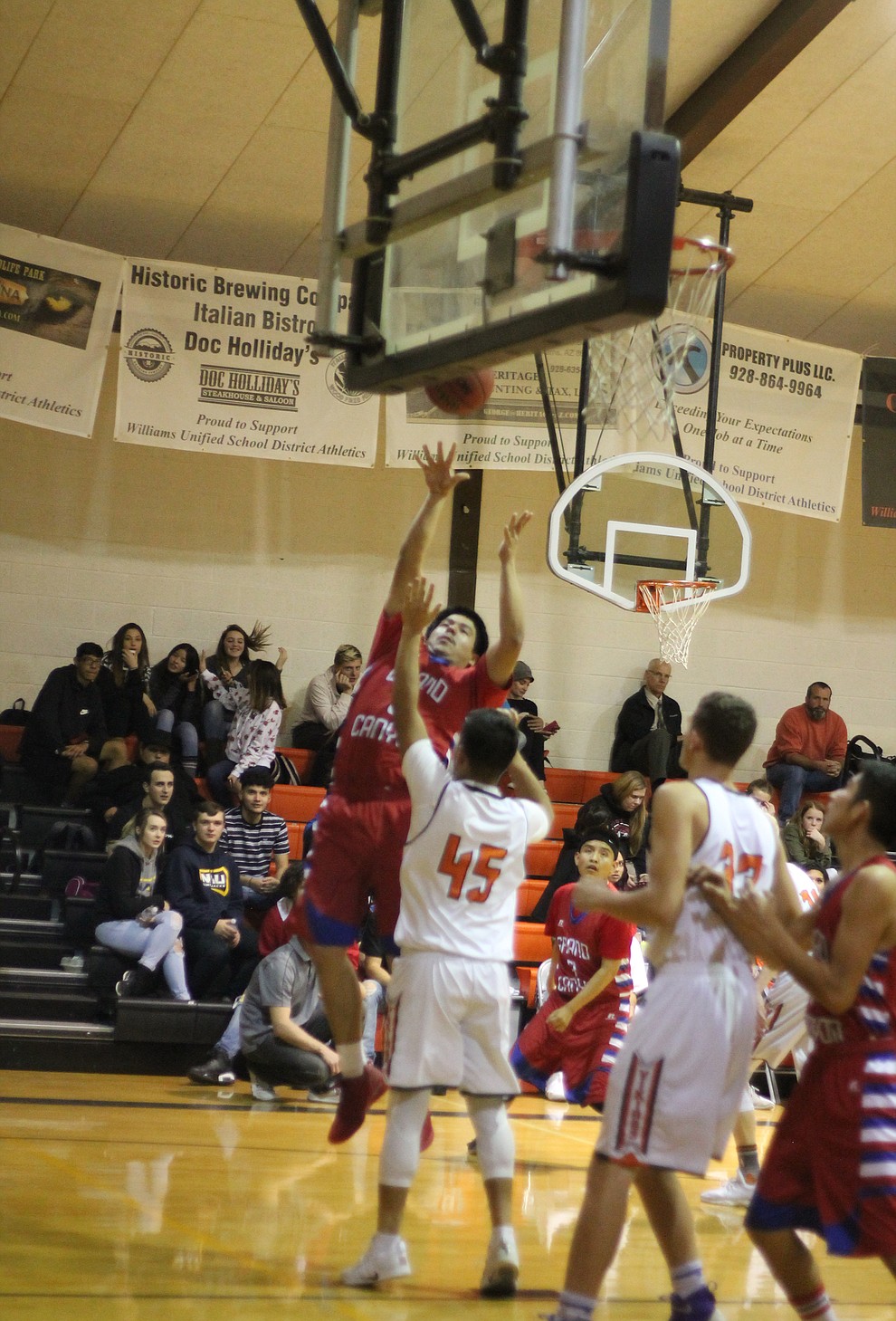 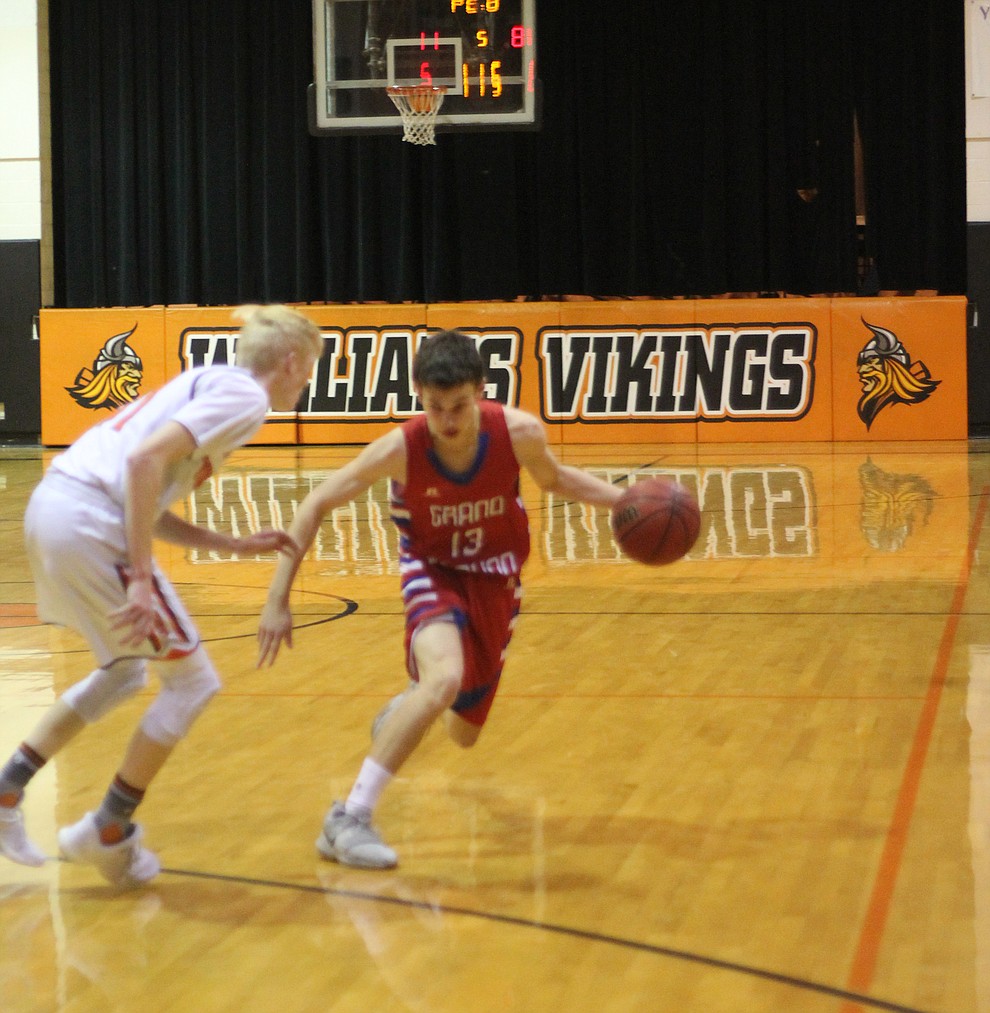 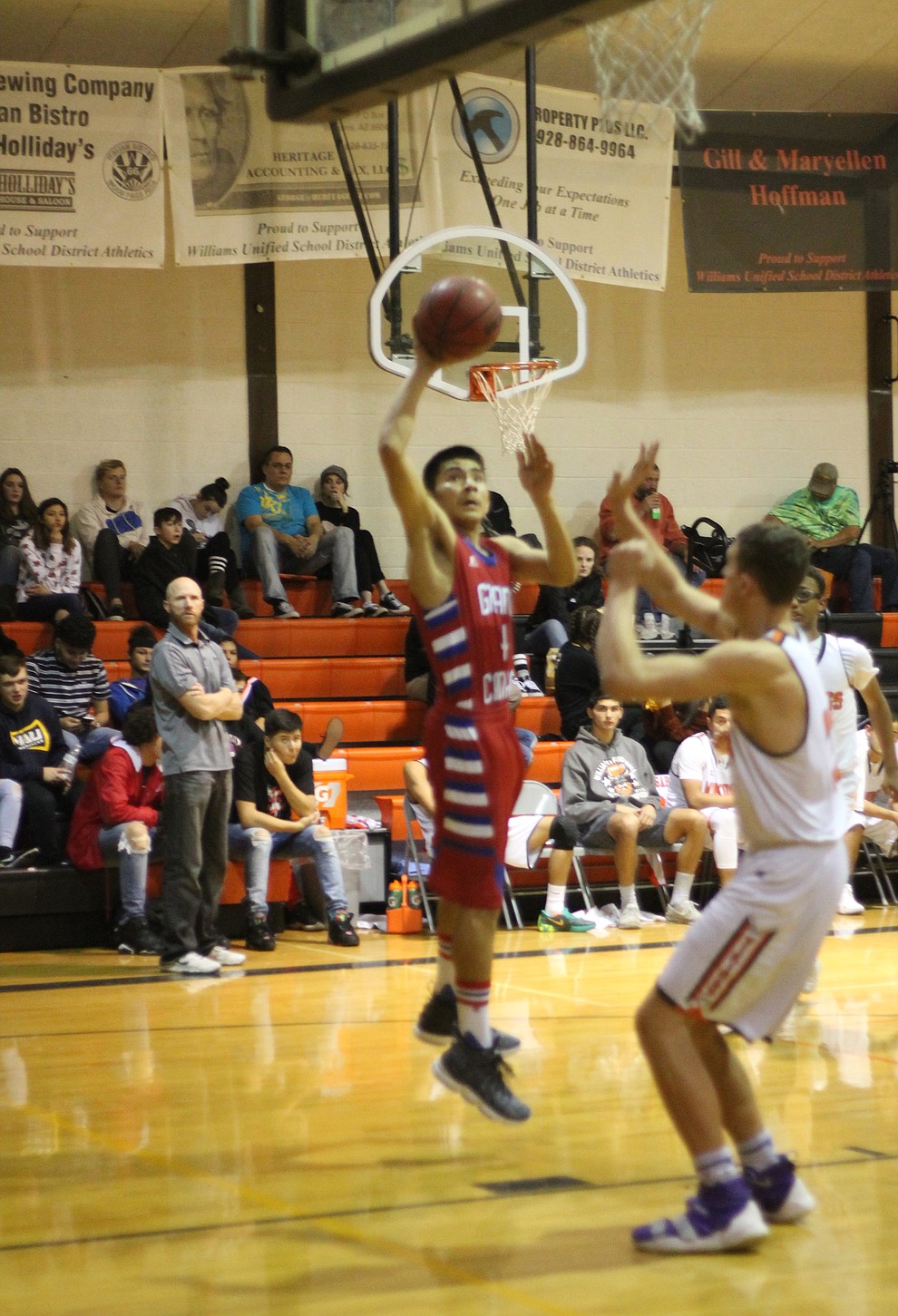 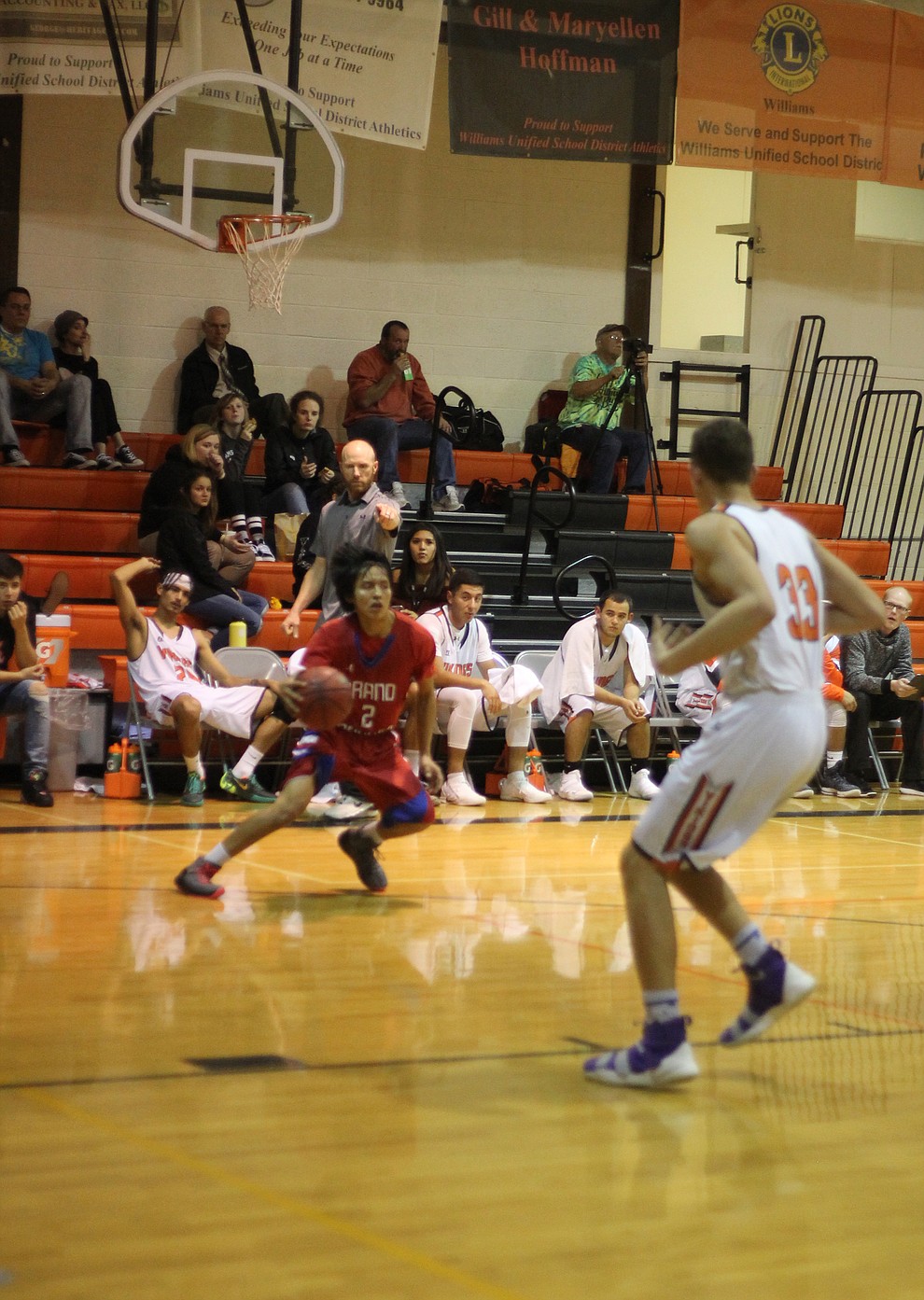 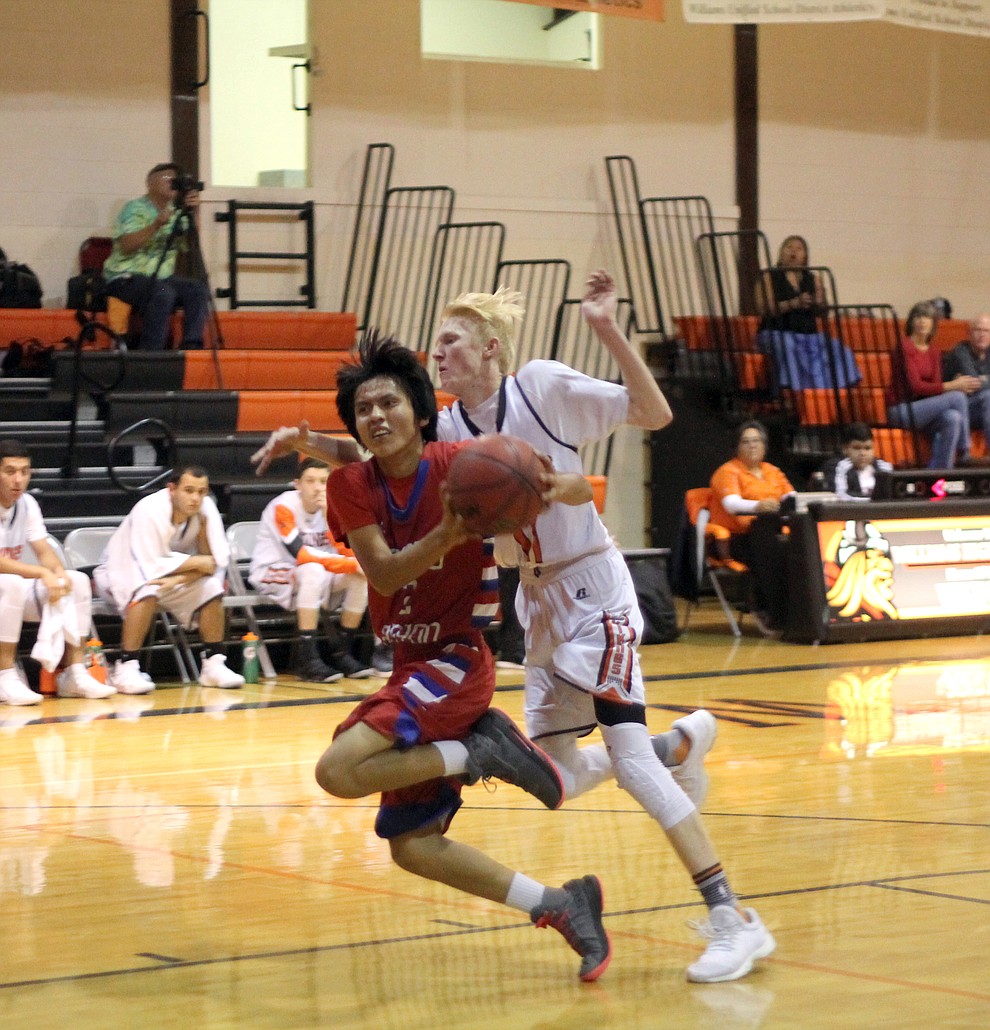 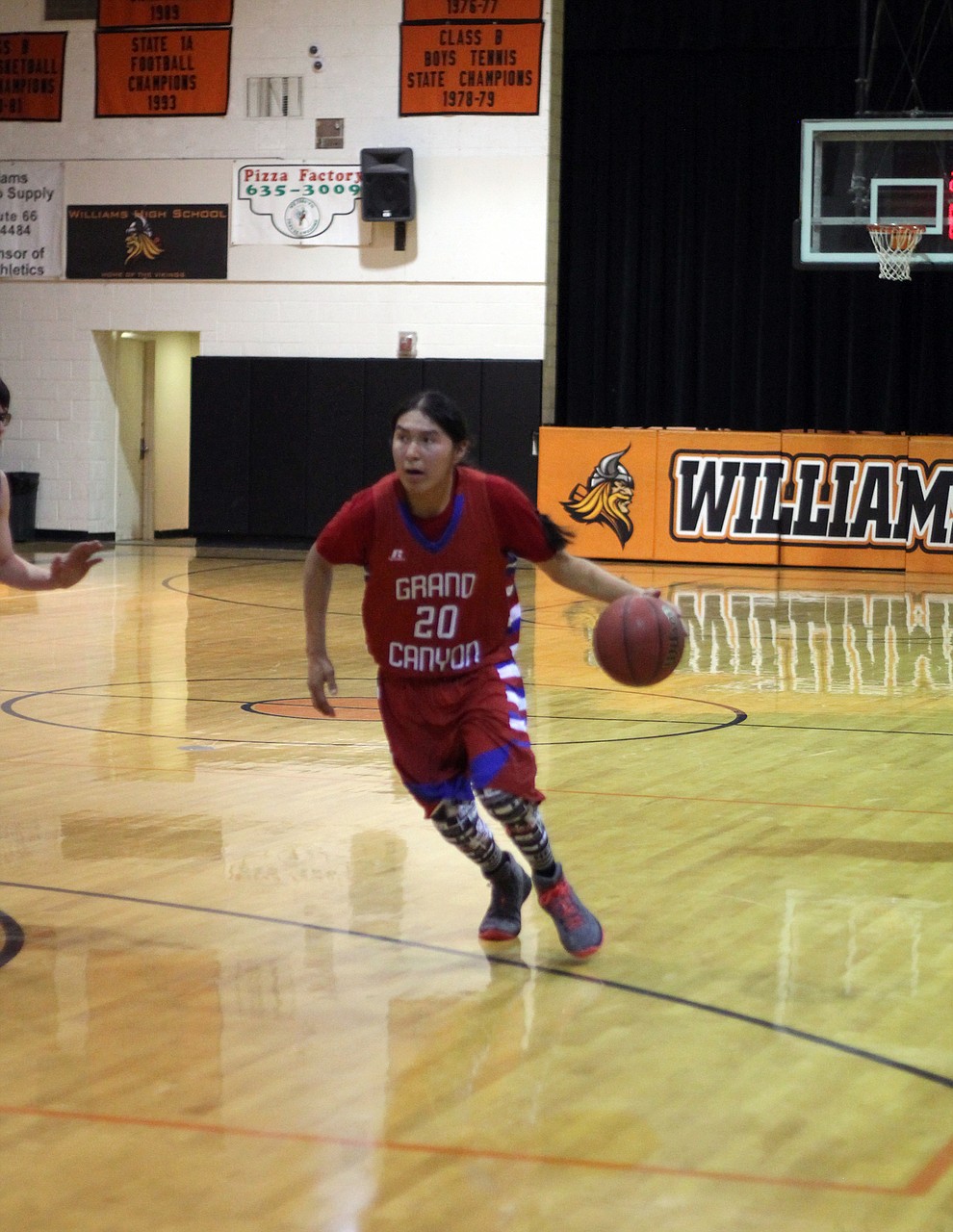 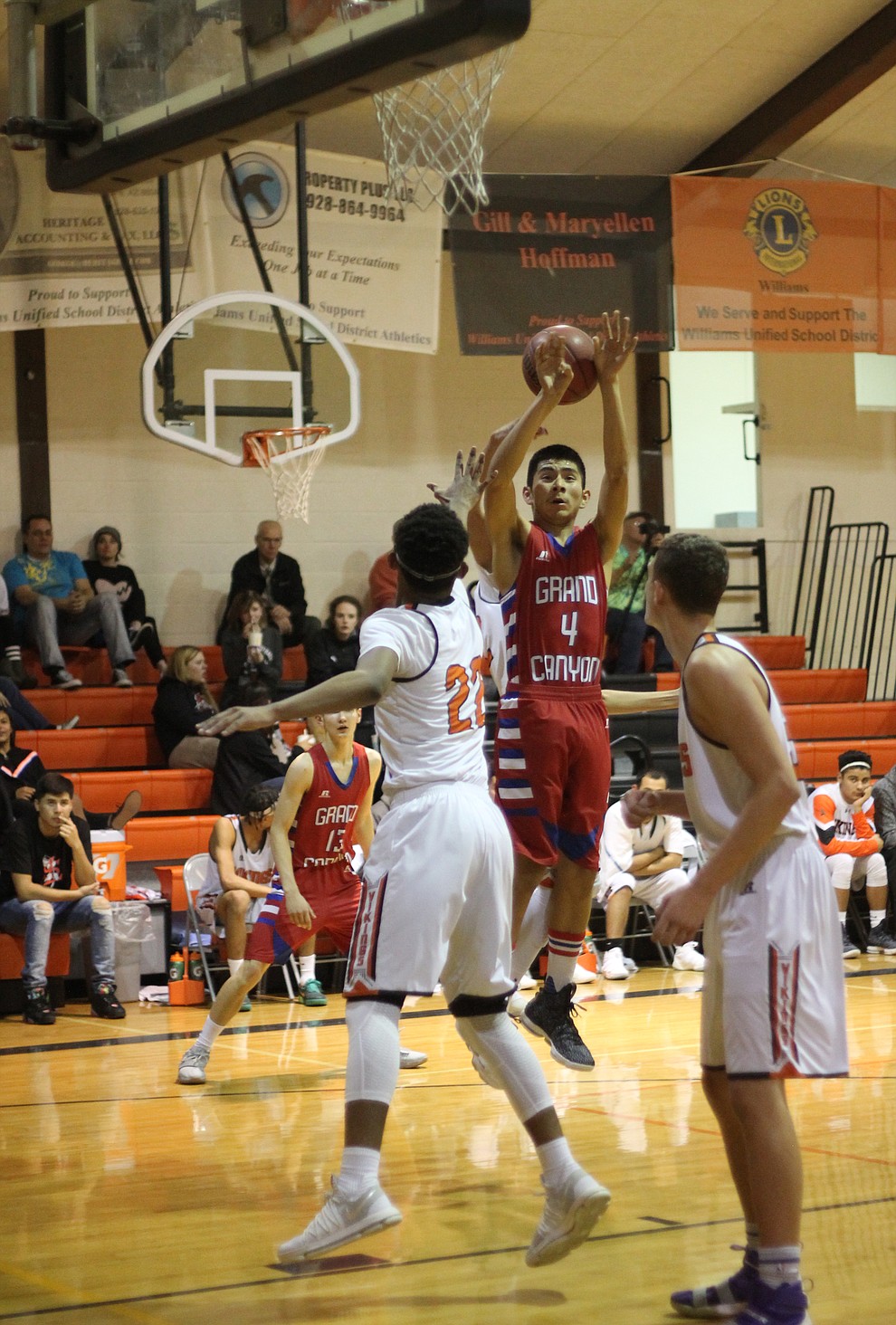 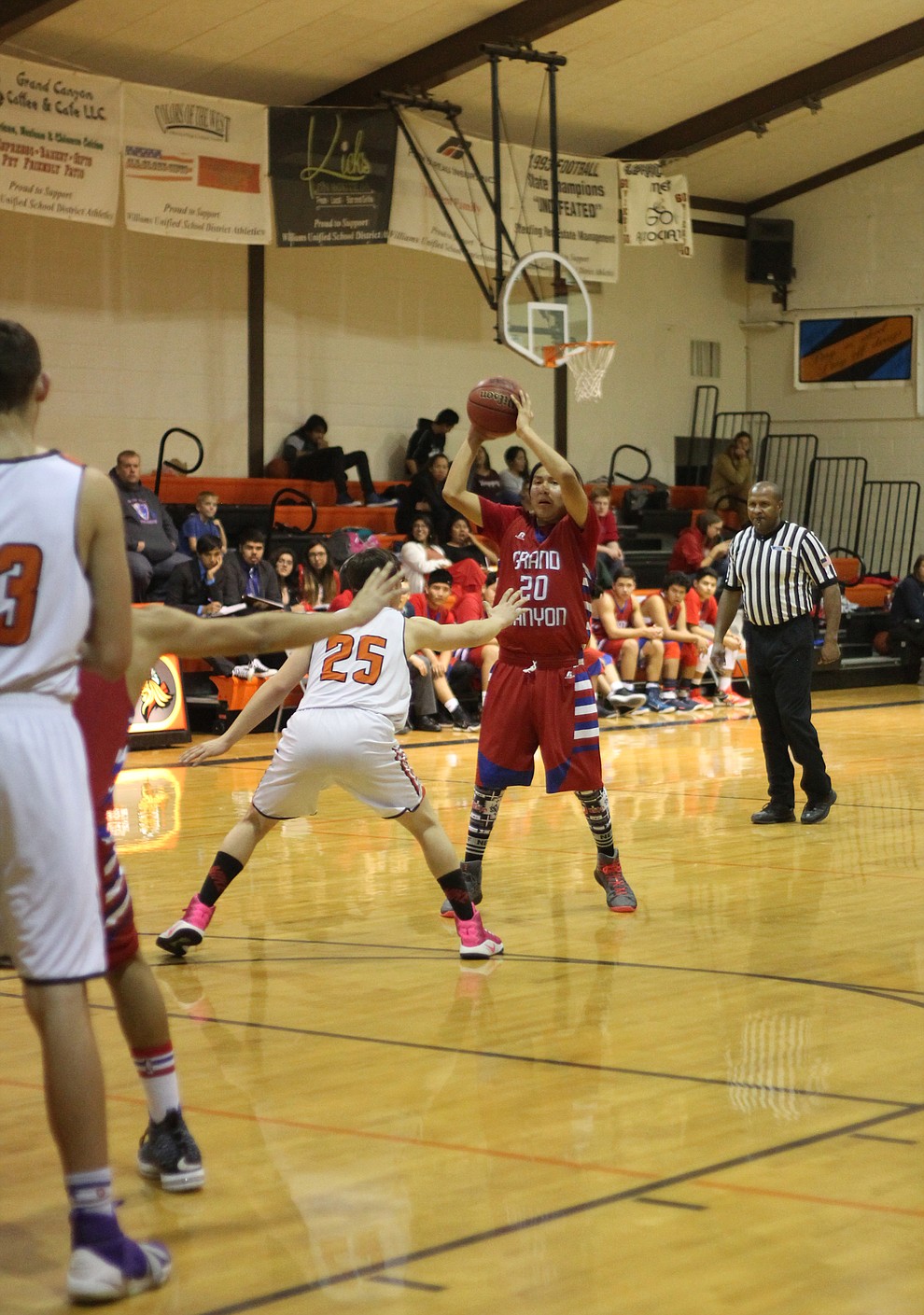 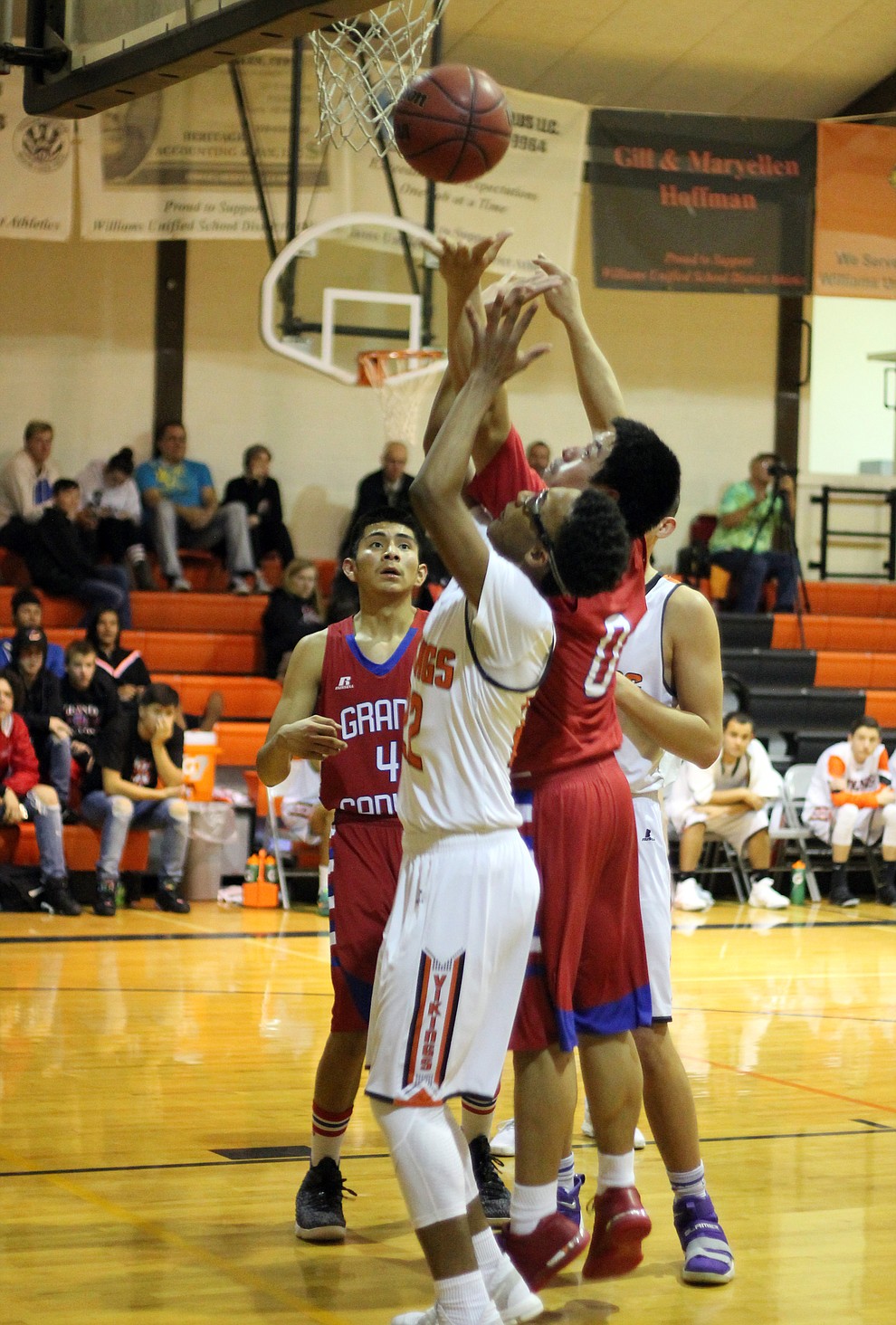 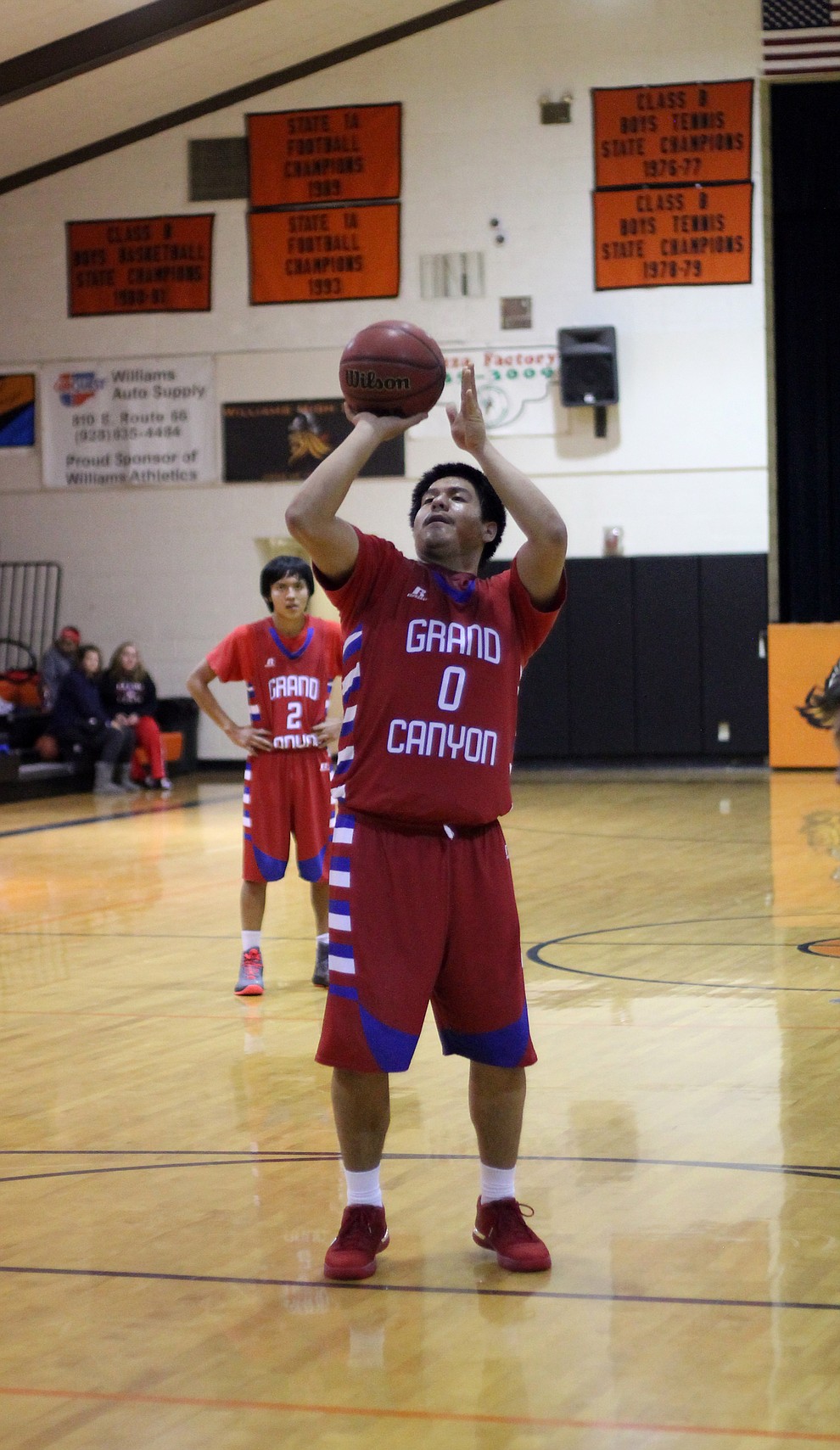 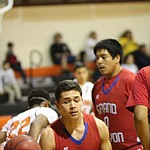 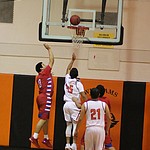 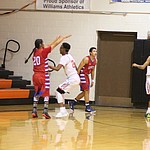 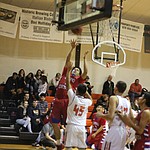 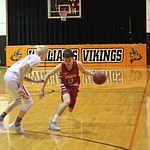 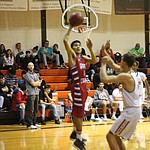 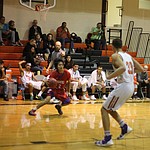 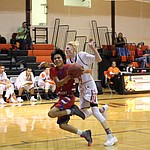 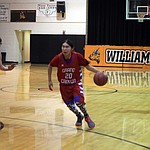 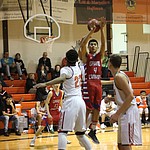 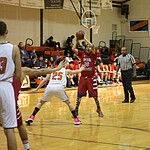 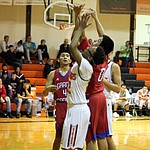 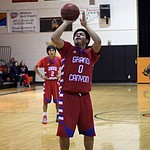 GRAND CANYON, Ariz. — January has been a month of tough losses and encouraging wins for the Phantoms, and head coach David Perkins said he is proud of the way the team is playing no matter what the scoreboard says.

The Phantoms opened a busy weekend at home against Ash Fork Jan. 11. Though they ultimately lost the contest 43-42 in overtime, Perkins said he was pleased with the way his team performed.

“These boys have never played an overtime game together and they played hard,” he said. “We learned some lessons from this game.”

Sophomore Rufus Keebahe led all scorers with 13 points, including three 3-pointers. Senior Travis Moreno led the Phantoms’ defensive effort with 8 points, 11 rebounds and 3 steals. Neegoh Kaska and Mason Tacey rounded out the top scorers for the Phantoms with 6 points each.

Perkins also praised the team for remaining composed after a hard foul by an Ash Fork player, and said he was frustrated by a lack of rules regarding what he considers dangerously hard fouls.

The player slid underneath junior Alreyn Reid taking out his legs and upending him on his head, Perkins said.

“We could have lost Aleryn on that play and that young man who committed the foul is very lucky he did not seriously hurt someone,” he said.

The Phantoms traveled to face the Cibecue Wildcats Jan 12.

Perkins said the Phantoms got behind in the second quarter as they struggled to contain the Wildcats’ offense.

“It felt like they never missed a three-point shot all night except a late half-court shot,” Perkins said. “Offensively, they were very sharp.”

Moreno had a monster game for the Phantoms, scoring 15 points and contributing 9 rebounds, 4 assists and 3 steals.

“He is not affected by the scoreboard,” Perkins said about Moreno after the game. “He plays with heart every second he is on the court.  His team is down by 30 in the 4th quarter and he is still trying to win.”

Reid contributed 14 points, including going 5-of-6 from the free throw line. He had 3 offensive rebounds and 4 assists. Keebahe rounded out the top scorers with 9 points and a blocked shot.

The Phantoms rounded out their weekend series in Joseph City, where they lost 65-42 to a tough Wildcats team.

Moreno again led the team with 12 points, 6 rebounds and 4 assists, but Perkins said the outcome was decided early in the game. Keebahe added 6 steals and 6 points and Reid finished with 10 points.

After a few days of rest, the Phantoms headed to Williams Jan. 16, where they lost 55-46 to the Vikings.

Perkins said Moreno had a difficult defensive assignment in covering the Vikings’ leading scorer Payce Mortenson, who is also the reigning 1A Central Offensive Player of the Year. Moreno held Mortenson to just 14 points and a 36 field goal percentage.

Moreno also recorded his first double-double of the season, scoring 11 points and hauling in 10 rebounds. Kaska scored 12 points and contributed 8 rebounds and 2 blocked shots, while Melaki Longhoma threw in 6 points and 7 rebounds.

The Phantoms cruised to an easy win over the Shonto Prep Grizzlies Jan. 18, going up 17-8 in the first quarter and putting the Grizzlies away 56-28.

Moreno, Reid and Longhoma led the charge for the Phantoms scoring 16, 13 and 9 points respectively. Longhoma also crashed the boards for 11 total rebounds, including 8 offensive rebounds. Keebahe had a team-high 7 steals and Tacey contributed 3 assists.

Coming off their win over the Grizzlies, the Phantoms found themselves host to the Cibecue Wildcats once again, but this time, the outcome was much closer.

Having faced the Wildcats only a week earlier, the Phantoms lost by 30 points. Perkins said the team had a bit of trouble keeping up with the Wildcats’ full-court defense early and found themselves down by 6 after the first quarter. The game stayed close until the end, as the Phantoms took the lead, 51-50, for the first time in the fourth quarter.

Tacey led the scoring for the Phantoms, tossing in 16 points. Reid finished with 12 points and 5 assists and Keebahe went 60 percent from beyond the arc, contributing 11 points on 3 3-pointers and a field goal. Kaska had 9 rebounds and 2 blocked shots, finishing with 5 points.

Despite the loss, Perkins was happy with the team’s play.

“This was a bounce-back game for us against a team that really has an explosive offense,” he said. “We played our offense the way we wanted to play, we stayed tough on defense, and we have really taken care of the basketball the last two games.”

Perkins said that the team seems to be coming together for the final stretch of the season.  Senior Israel Herrera, who was injured over a year ago, is returning for the Phantoms’ homecoming game against the Mogollon Mustangs Jan. 26.

“We are as healthy as we have been all season, we are playing the best basketball we have played in two years, and we are looking to finish strong,” Perkins said.