Rising to the challenge: Vikings move to fifth in 1A Conference 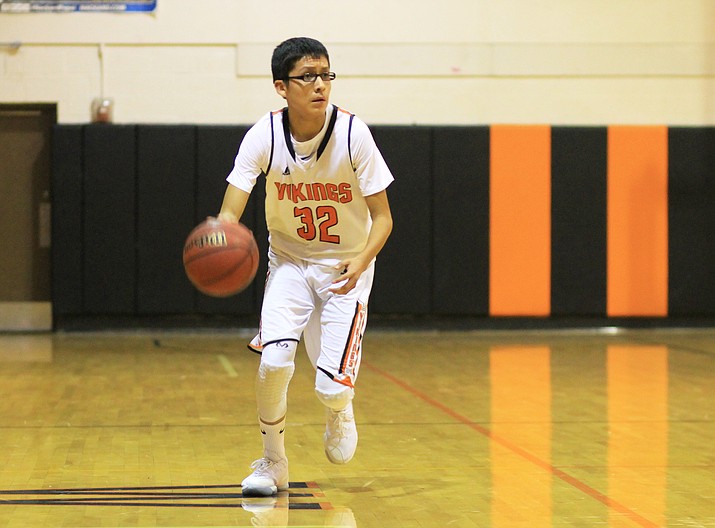 Brandon Tuhy looks for an open man during the game with Cibecue Jan. 14.

The Vikings have now won 12 of their last 13 games and are ranked 5th in the 1A Conference behind the Gregory School, Joseph City, Ft. Thomas and Patagonia Union.

The Vikings, running on all cylinders and showing tremendous hustle in all aspects of the game, outscored the Wildcats in every quarter but the fourth.

“This was a big win for us,” said head coach Troy Mortensen. “We lost by nine earlier in the year. It was probably the worst game we played in three years.”

Mortensen said the entire team contributed to the win.

“When you don’t have to rely on one kid and they have to guard all five, it makes you a lot tougher to beat,” he said. 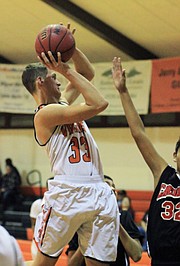 The Vikings matched the play of the Wildcats in the first quarter with Payce Mortensen piling up three field goals and going 4-of-4 from the free throw line to help the Vikings lead 16-15 at the end of the quarter.

From that point, the Vikings never looked back as they outscored the Wildcats 22-12 in the second quarter and 20-14 in the third. McMenamin, who came off the bench, sunk four shots under the basket and sunk 2-of-2 free throws to lead scoring for the Vikings in the second quarter. Mortensen nearly matched McMenamin with three baskets, which included connecting from the 3-point range once and going 4-of-4 on free throws.

“The kids are starting to look more underneath when that option hasn’t typically been there as much,” Mortensen said referring to the added height when the six-foot-five McMenamin is on the court.

Gary contributed to the Vikings’ 20-point third quarter when he had a run of three field goals in a row. Until that point, Gary had gone 3-of-6 on free throws.

“The younger group has hustle but lacks experience,” Mortensen said. “We’re working on them not giving up little leads but that comes with playing. They’re getting smarter.”

Mortensen said the advantage to having a solid second team is giving the other players a chance to rest. 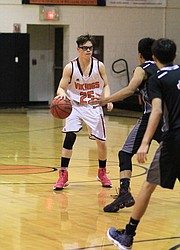 “It’s good to have those younger kids come in and give us the few minutes we need,” he said. “It gives us some breaks and tonight was a great example of how everybody can play and contribute and come out with a big win.”

The Wildcats made a short run in the final quarter, outscoring the Vikings 16-14, which wasn’t enough to take the lead as the Vikings won 72-57.

Mortensen said a lot of the Vikings’ success this season can be attributed to a solid group of senior players.

“These boys have been playing together a long time,” he said. “They don’t want to lose. Some of it is pride in who they are and what they represent. They want to do well.”

Mortensen said the support of the community has also been essential to the growth of the team this year.

“To be able to have the community here with this win, it’s good,” Mortensen said. “I like seeing people here, it makes it a lot more fun.”

The Vikings have scored 1,211 points in 21 games played this season, averaging 57.6 points per game. The team has averaged 40 percent for field goals and 24 percent for 3-pointers.

McMenamin is first in the 1A Conference in blocks with 48, averaging 2.4 blocks per game. He also broke into the top 25 in rebounding, pulling down 62 defensive rebounds and 70 offensive rebounds in the first half of the season.

Juaquin Gutierrez is 16th in the 1A Conference for 3-point percentage, making 30 percent so far this season. He has made 17 of 56 attempts.