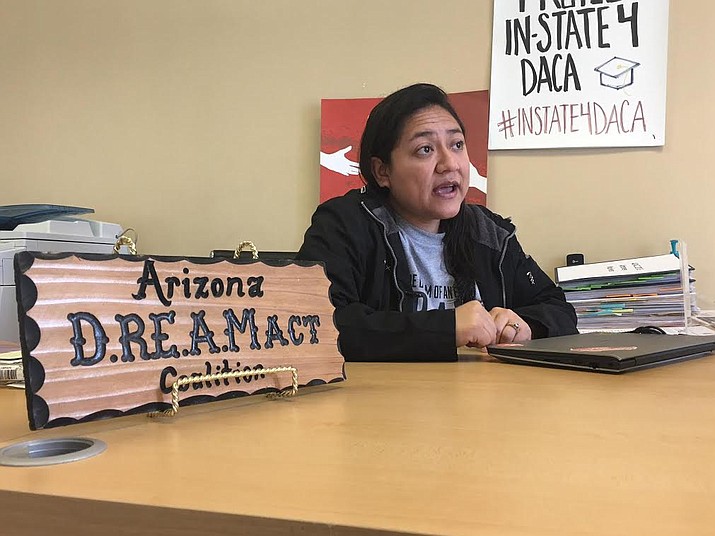 Karina Ruiz, a DACA recipient herself, works at Arizona Dream Act Coalition assisting immigrants in the U.S. toward a path for lawful U.S. citizenship along with the application process for DACA recipients.

U.S. District Judge William Alsup granted a request by California and other plaintiffs to prevent President Donald Trump from ending the Deferred Action for Childhood Arrivals (DACA) program while their lawsuits play out in court.

Alsup said lawyers in favor of DACA clearly demonstrated that the young immigrants “were likely to suffer serious, irreparable harm” without court action. The judge also said the lawyers have a strong chance of succeeding at trial.

White House Press Secretary Sarah Huckabee Sanders said in a statement Jan. 10 that the ruling was “outrageous, especially in light of the president’s successful bipartisan meeting with House and Senate members at the White House on the same day.”

Sanders said the issue should go through the normal legislative process and pledged Trump will work with members of both parties to reach a permanent solution.

DACA has protected about 800,000 people who were brought to the U.S. illegally as children or came with families who overstayed visas. The program includes hundreds of thousands of college-age students. U.S. Attorney General Jeff Sessions announced in September that the program would be phased out, saying former President Barack Obama had exceeded his authority when he implemented it in 2012.

On Jan. 9, the Department of Justice said the judge’s decision doesn’t change the fact that the program was an illegal circumvention of Congress, and it is within the agency’s power to end it.

“The Justice Department will continue to vigorously defend this position, and looks forward to vindicating its position in further litigation,” department spokesman Devin O’Malley said in a statement.

Sessions’ move to phase out DACA sparked a flurry of lawsuits nationwide.

Alsup considered five separate lawsuits filed in Northern California, including one by California and three other states, and another by the governing board of the University of California school system.

“DACA covers a class of immigrants whose presence, seemingly all agree, pose the least, if any, threat and allows them to sign up for honest labor on the condition of continued good behavior,” Alsup wrote in his decision. “This has become an important program for DACA recipients and their families, for the employers who hire them, for our tax treasuries, and for our economy.”

That echoed the judge’s comments from a court hearing Dec. 20, when he grilled an attorney for the Department of Justice over the government’s justification for ending DACA, saying many people had come to rely on it and faced a real and palpable hardship from its loss.

Alsup also questioned whether the administration had conducted a thorough review before ending the program.

Brad Rosenberg, a Justice Department attorney, said the administration considered the effects of ending DACA and decided to phase it out over time instead of cutting it immediately.

DACA recipients will be allowed to stay in the U.S. for the remainder of their two-year authorizations. Any recipient whose status was due to expire within six months also got a month to apply for another two-year term.

The Justice Department said in court documents that DACA was facing the possibility of an abrupt end by court order, but Alsup was critical of that argument.

People took out loans, enrolled in school and even made decisions about whether to get married and start families on the basis of DACA and now face horrific consequences from the loss of the program, said Jeffrey Davidson, an attorney for the University of California governing board.

“The government considered none of this at all when they decided to rescind DACA,” he said at the hearing.

The University of California said in a statement after the decision that “UC’s DACA students represent the very best of our country and are a key part of California and our nation’s future.”

The statement says the UC system will persist in legal challenges to the end of the program and will seek permanent protection for the young immigrants.

DACA recipients are commonly referred to as “dreamers,” based on never-passed proposals in Congress called the DREAM Act that would have provided similar protections for young immigrants.

“Dreamers lives were thrown into chaos when the Trump administration tried to terminate the DACA program without obeying the law,” California Attorney General Becerra said in a statement after Tuesday’s decision. “Tonight’s ruling is a huge step in the right direction.”