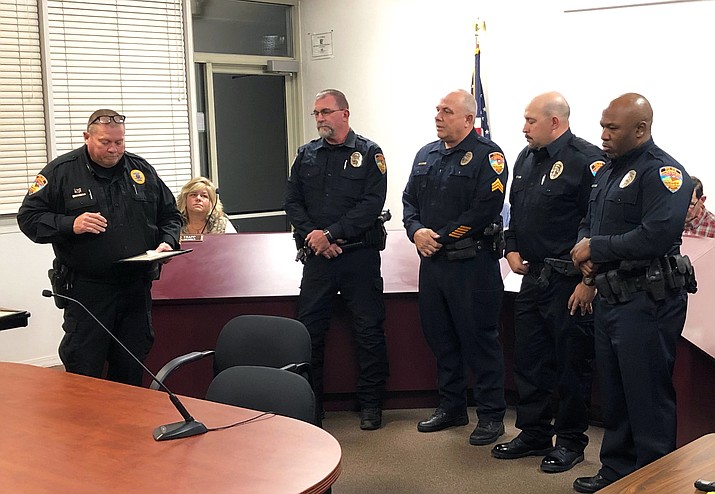 In front of a packed council chamber full of community members, family and friends, four Williams Police Department officers were honored for their bravery while responding to a call for an armed suicidal subject in November 2017.

Wygal and Wilson were in a vehicle outside the suspect’s apartment when they came under fire from a shooter on the second story of the building. The suspect fired 20 rounds from a high powered rifle, striking the officers’ vehicle 14 times.

Williams Police and Coconino County Sheriff’s deputies were given a description of the man and the vehicle.

After a brief search, the vehicle was located parked outside a residence near First Street in Williams.

According to Williams Police Chief Herman Nixon, officers were unsure whether Gutierrez was inside the residence.

Officers began evacuating the nearby residences and businesses, including the post office, Allstate and several other buildings.

Officers set up a perimeter and attempted to reach Gutierrez via phone, however, the suspect began shooting at officers from the upstairs room in the residence.

Within minutes of the shooting, Wygal contacted Gutierrez on the phone and talked him into coming out. He surrendered without incident.

“These guys stood their ground and went in and took care of the issue,” Nixon said. “Because of your actions, no one was hit by gunfire. These officers worked as a team performing their job at great risk to personal safety in order to protect our community and bring the situation under control.”

Gutierrez was taken into custody and transported to Coconino County Jail, where he currently resides, and is charged with two counts of attempted homicide on law enforcement, two counts of aggravated assault and two counts of criminal damage.