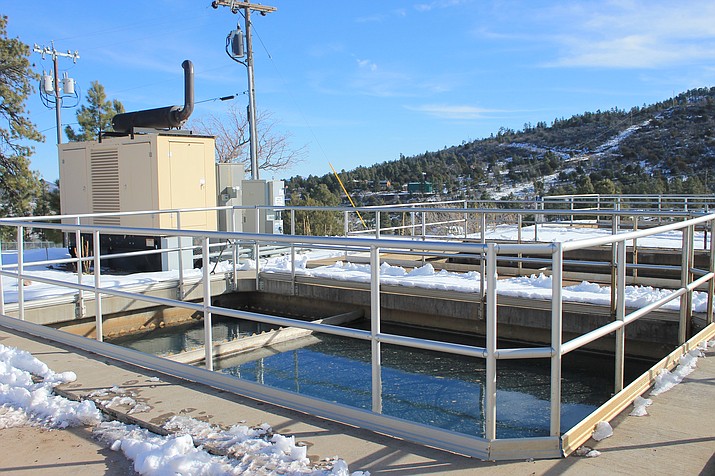 The city of Williams has hired Woodson Engineering and Surveying, Inc. to complete a water management plan.

The city of Williams took the first step to creating the Williams Water Management Plan by selecting Woodson Engineering and Surveying, Inc. as the project contractor at the Jan. 11 city council meeting.

The council voted unanimously in choosing the Flagstaff engineering firm, which has agreed to complete the project by the

Much of the detail of the $120,000 contract is still to be worked out between the engineers and the council.

“I think it’s important to get the core portion of the study underway,” said city manager Bill Lee in reference to the June 1 completion date required by the grant.

Lee said the grant will be useful in helping the city secure future funding opportunities for city water projects.

The council also approved $52,610 to purchase pumps to be placed at the city’s wastewater treatment plant as part of the city’s re-use project. Funding for the pumps also comes from the Community Development Block Grant.

In other council matters, Lee advised the members that Vision Air was seeking to renew their contract with the city for use of H.A. Clark Memorial Airfield. Vision Air uses the airport to rendezvous with passengers who wish to visit the Grand Canyon.

“The idea of having Vision Air come in the first place was with the hope that some of the people would be transported to downtown Williams where they would stop and spend money,” said Williams Mayor John Moore. “I don’t think that has happened, but I think it’s good to have them fly in whether we get anything or not. It’s just nice to see them use that big fancy airport.”

The council chose not to act on the request for a contract renewal until a decision has been made regarding a selection of a Fixed-Based Operator (FBO) at the airport. The city is currently seeking an FBO to oversee the operations at the airport.

Pat Carpenter presented a water update and water needs assessment to the council. Carpenter said several of the projects are expensive but necessary if the city is looking at future development.

He said at the top of the list is more water storage for city. He said a million gallons of storage is needed and would cost about $600,000.

Another city need is the removal and replacement of the raw water line coming from Dogtown Lake and the Dogtown wells to the city.

“The city would save money because you don’t have to send the well water to be treated,” he said.

Carpenter said the current line has multiple leaks that are exacerbated when the wells are shut off and then repressurized.

“That’s when we get leaks,” he said. “Most of the issues are between Echo Canyon and town.”

Carpenter said the recently revitalized Santa Fe Well has been tested and is operating at 60 — 70 gallons per minute. He said the screen was cleaned, a new pump was installed and ADEQ has approved the use.

“They (previous water plant employees) thought the well was running out of water,” Carpenter said. “But we put in a new pump and everything is ready.”

Carpenter is also requesting $17,000 to replace a backup pump at the wastewater treatment plant that went out this winter. Council decided to table the decision until the finance director could evaluate it.

Scott Talboon presented to the council about Coconino Community College (CCC) revitalizing the Small Business Development Center (SBDC). Talboon said CCC dropped the program during the financial crisis of 2006 and is now seeking to start it up again.

Talboon said the college is looking for community partners to help fund the program.

The Small Business Development Center program is a free service for new and existing business owners in Coconino County who seek counseling.

Anyone can come who is starting a business or has an existing business they want to take to the next level,” Talboon said.

Moore suggested the council put it on a future agenda for consideration.

Moore said he has heard many positive comments regarding the Christmas tree and decorations this holiday season. He said the only issue was on the west side of town when Arizona Public Service (APS) inadvertently cut off the power to the Memorial Park flag lights when turning the Christmas lights off.

Lee said he is trying to organize a council retreat to Sedona Recycles, a nonprofit community recycling center.

Lee said he also would like the council to tour Riverfront Park in Cottonwood to observe the softball and baseball multiplex, and then visit the Cottonwood Recreation Center, which includes a pool, gymnasium, events hall and exercise facilities.

“It’s a beautiful recreation facility,” Lee said. “I just want to kick the tires on a couple things with the council.”

The city staff is seeking an appraisal of the city owned building that houses APS on Route 66. APS customer service will be vacating the building by the end of March.

“We’re the last in the state to close down,” Lee said. “That’s our building. We are getting an appraisal done so the council will at least know whether to sell or lease or some combination thereof.”

At the request of council members, Lee said he has forwarded the city’s resolution opposing the NPS fee increase to Rep. Paul Gosar’s (R-Ariz)