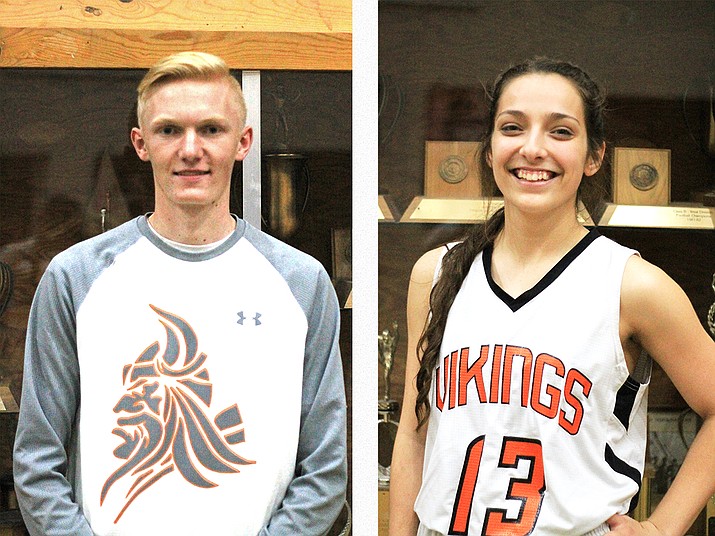 Payce Mortensen is a senior at Williams High School. He has played baseball and basketball for four years for the Vikings.

His goals for the basketball season are to finish strong in the next tournament and have good placement for the playoffs.

He said the additional height on the basketball team this year could help them go further.

He said he appreciates teachers Jeff Brownlee, Phillip Echeverria and Catherine Kowalski for checking up on him and encouraging him to do better. He also appreciates the work Robin Gutshall put into his education when he was a freshman and sophomore. He said his favorite classes are his math classes.

In his free time Mortensen plays sports and watches his family play sports. He also takes care of several farm animals at his home.

When he travels with the Vikings he likes to eat at Kane’s and Chick-fil-A. He said if he went on a road trip he would bring the entire basketball team and stay entertained by Zack Perkins.

Paige Kmetz is a senior at Williams High School. She has played volleyball and basketball for four years with the Vikings.

Kmetz also participates in the Vikings band, where she plays the saxophone. She is in National Honor Society and student council.

Her goal for this basketball season is to make the state playoffs and take the first round. She said she is proud of the work the Lady Vikes have done this year.

She said she had many great teachers at Williams High School and has especially enjoyed Catherine Kowalski’s pre-calculus class. She also appreciated Kowalski’s help with the basketball team.

She said teacher and coach Phillip Echeverria has also encouraged to her, and she enjoys Ariana Montgomery’s classes.

After graduation she plans to attend Northern Arizona University and study teaching. She is undecided about what grades she would like to teach. She said she is interested in working with senior citizens.

After school she mostly plays sports and participates in the band. She said she doesn’t have a lot of free time.

She said if she went on a road trip she would take Sarah, Veronica, Alessandra, Maddie, Riley and most of her basketball teammates. She likes to eat at In-N-Out Burger when traveling with the team.

Senior spotlight: Vikings look to graduation and beyond
Mortensen scores 41 in Vikings rout of Mustangs, 75-61
Back at the net: Senior talent to lead Vikings hoopsters
Lady Vikes basketball gets underway
Rising to the challenge: Vikings move to fifth in 1A Conference
Contact Us
Submit Questions, Comments, or Story Ideas