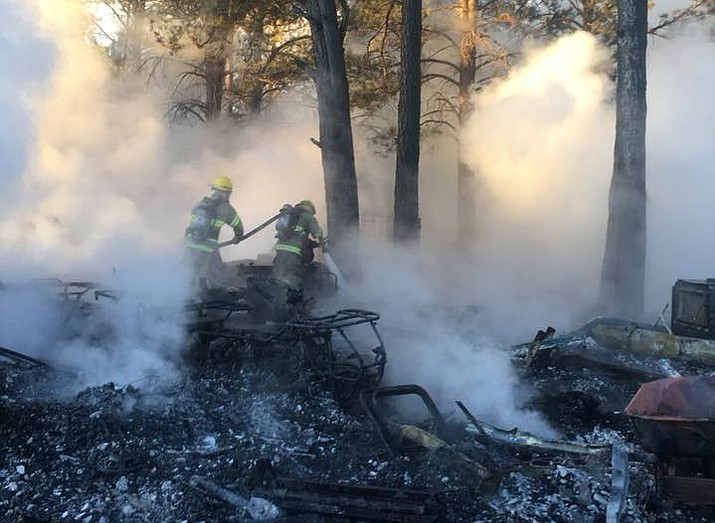 A family vacation home was deemed a total loss following a structure fire in Parks Dec. 29. No injuries were reported.

According to Ponderosa Fire Department Chief Lee Antonides, a 911 call came in at 5:37 a.m. from a neighboring residence reporting the fire at 12717 E. King John Road in Parks.

Firefighters from Ponderosa Fire Department responded and found the house engulfed in flames.

“I was first one on scene and the structure was probably 70 to 80 percent involved at that time,” Antonides said.

Antonides said although the home was later determined to be vacant, at the time of the blaze firefighters were unaware of whether the home was occupied or not.

“My crew did a preliminary search and were able to get inside and search the living room, but the conditions were bad enough they had to pull out,” he said.

The home is owned by a family who lives in Tucson.

“Once we realized we were defensive on the structure, our primary goal was to keep it from spreading to the trees and the rest of the neighborhood,” he said.

Antonides said Flagstaff Fire Department is conducting an investigation as to the cause of the blaze, but at this time it is undetermined.

“Because of the amount of damage to the home, it’s very hard to do an inspection when there is really nothing left,” he said.

Antonides said Ponderosa Fire Department has been unusually busy over the past two months. He said the department has dealt with eight fatalities beginning with a deadly structural fire where one man died in early November, followed by two fatalities in two separate accidents on I-40.

They department also dealt with a large semi-truck pile-up on I-40 during the first snowfall of the year in December, and the carbon monoxide poisonings and second structural fire last week.

“That is very uncommon for us,” Antonides said about the number of incidents.

The district includes homes and property in the Parks area, and traffic incidents on I-40 from milepost 191 to milepost 171.