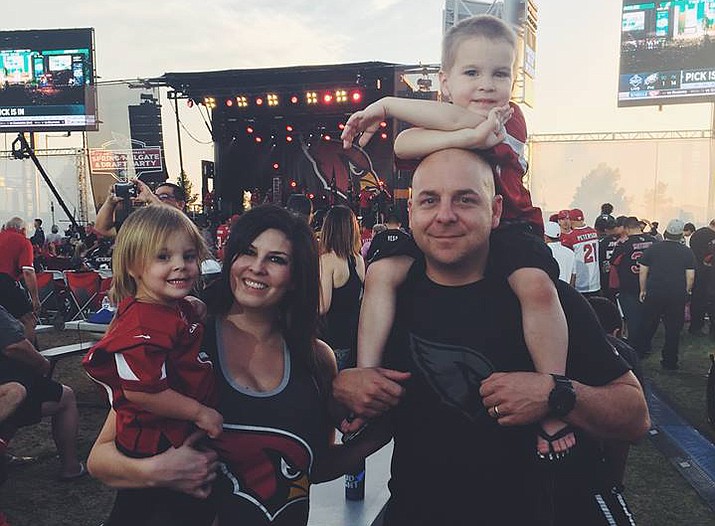 Megan and Tony Capitano, along with their children Kingsli and Lincoln, died of suspected carbon monoxide poisoning in a house in Parks Jan. 1.

How to protect your family

Carbon monoxide detectors: Every home should have at least one.. They are available at most hardware stores.

Inspections: Every fall, furnaces and other gas burning appliances should be inspected by a licensed professional.

On Jan. 1 at 12:26 p.m., CCSO deputies responded to a home at 1830 N. Lance Drive in Parks after a family friend contacted the sheriff’s office to conduct a welfare check.

According to the caller, family members had become concerned after they were unable to contact the family for several days.

When deputies arrived at the home they found the family’s vehicle in the driveway and a strong smell of gas coming from the residence, officials said. Additional units were requested, including firefighters from Ponderosa Fire Department. Before entering the home, fire officials put on protective breathing equipment and subsequently found four people dead inside.

According to Coconino County Sheriff’s Office spokesman Jon Paxton, the family arrived at the home late on Dec. 29 and investigators believe the family succumbed to the carbon monoxide in the early morning of Dec. 30.

Why carbon monoxide is so deadly

The great danger of carbon monoxide (CO) is its attraction to hemoglobin in the bloodstream. When breathed in, CO enters the bloodstream and replaces the oxygen molecules found on the critical blood component, hemoglobin, depriving the heart and brain of the oxygen necessary to function. When CO is present in the air, it rapidly accumulates in the blood, causing symptoms similar to the flu, such as headaches, fatigue, nausea, dizzy spells, confusion and irritability. As levels increase, vomiting, loss of consciousness and eventually brain damage or death can result.

“What the deputy was smelling was the furnace running,” said Ponderosa Fire Chief Lee Antonides. “The exhaust from the furnace was what they were smelling.”

On Jan. 2, investigators from CCSO contracted a licensed heating and cooling service provider to inspect the heating system of the cabin. The contractor found a significant failure in the heating system, which would be consistent with carbon monoxide overcoming the home, CCSO officials said.

“There’s a tube that is the fresh air intake and there was damage to that,” he said. “So it was not drawing air from outside the crawl space like it should. It was pulling exhaust that was escaping and just recirculating it throughout the house.”

Antonides said that even after ventilating the home for 10 minutes, the carbon monoxide monitor readings inside the home were 300 ppm (parts per million). According to the CDC, anything above 50 ppm is harmful.

Antonides recommends that people install not only smoke detectors, but also carbon monoxide detectors in their homes, whether they are primary homes or vacation homes. He said batteries should be replaced at least yearly on a regular basis.

Generators and other gasoline powered equipment

“They should always pick one day per year. If they are at their cabin for Christmas, then that would be a time to change the batteries,” he said.

Each fall, chimneys should be cleaned and heating systems should be inspected prior to use by a licensed contractor, Antonides said.

Anthony Capitano was an employee for Discount Tire which released the following statement about him:

“Discount Tire is deeply saddened by the loss of one of our own Discount Tire employees in Arizona. Tony was an upstanding member of our team and our thoughts and prayers are with his family and friends.”

According to their friends, the family was avid Cardinals fans and enjoyed the outdoors.

The Coconino County Medical Examiner’s Office is still working to determine an official cause and manner of death.

Family and friends have set up a Chase bank account to help a sibling who was not at the cabin at the time of the incident. Those interested can donate by check, no cash, to the account under the Capitano family #252237729.