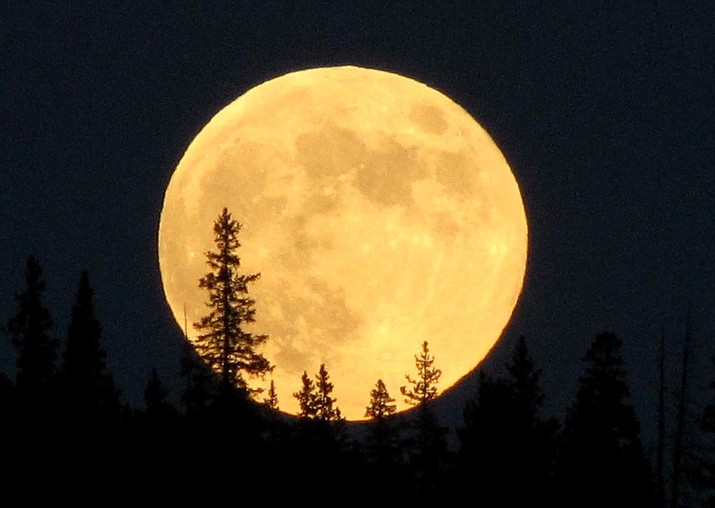 The first supermoon of the year rises up over pine trees Jan. 1.

Those in the western hemisphere were graced with the first supermoon of the year Jan. 1.

According to NASA, a supermoon is a moon that is full when it is at or near its closest point in its orbit around Earth. Since the moon’s orbit is elliptical, one side (apogee) it is about 30,000 miles (50,000 km) farther from Earth than the other (perigee). Nearby perigee full moons appear about 14 percent bigger and 30 percent brighter than full moons that occur near apogee in the moon’s orbit.

“The supermoons are a great opportunity for people to start looking at the moon, not just that once but every chance they have,” said Noah Petro, a research scientist from NASA’s Goddard Space Flight Center.

It’s hard for our eyes to distinguish these small changes in size when the moon is high amidst the vastness of the night sky. But any time you catch a full moon as it rises or sets, while its suspended low on the horizon beaming through the silhouettes of trees or buildings, its apparent size might make you do a double-take. You almost feel as though you could reach out, grab the glowing orb, and drop it into your coffee cup. Even more so if it’s a supermoon.

If you can only catch one episode of the supermoon trilogy, catch the third one. It will be extra special.

First of all, the Jan. 31 supermoon will feature a total lunar eclipse, with totality viewable from western North America across the Pacific to Eastern Asia. The moon’s orbit around our planet is tilted so it usually falls above or below the shadow of the Earth. About twice each year, a full moon lines up perfectly with the Earth and sun such that Earth’s shadow totally blocks the sun’s light, which would normally reflect off the moon.

“The lunar eclipse on Jan. 31 will be visible during moonset. Folks in the eastern United States, where the eclipse will be partial, will have to get up in the morning to see it,” noted Petro. “But it’s another great chance to watch the moon.”

The moon will lose its brightness and take on an eerie, fainter-than-normal glow from the scant sunlight that makes its way through Earth’s atmosphere. Often cast in a reddish hue because of the way the atmosphere bends the light, totally eclipsed moons are sometimes called ‘blood moons.’

“We’re seeing all of the Earth’s sunrises and sunsets at that moment reflected from the surface of the moon,” said Sarah Noble, a Program Scientist at NASA headquarters.