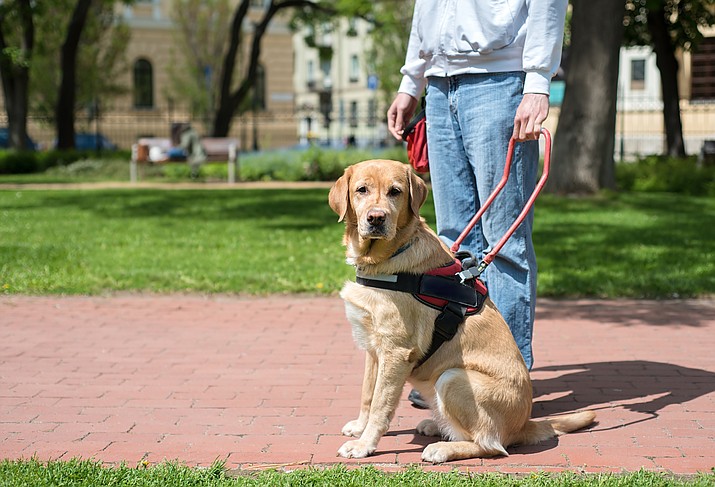 A Republican state senator wants to make it illegal to misrepresent a dog as a service animal and bring it into places where pets are not allowed.

Saying owners are abusing the law, a Republican state senator wants to make it illegal to misrepresent a dog as a service animal to bring it into places where pets are not allowed.

The proposal by John Kavanagh of Fountain Hills would allow judges to impose fines of up to $250 on someone who fraudulently misrepresents an animal as a service animal or service animal in training to anyone who operate any business or recreation site open to the public. That also includes buses, taxis and ambulances.

How that would work, Kavanagh said, is an individual would have to produce proof that the animal had actually been trained for a specific chore covered by the Americans with Disabilities Act.

The senator said nothing in SB 1040 would allow a business owner to refuse to let someone enter the premises solely because of the failure to provide such written proof. In fact, existing Arizona law prohibits requiring identification for the service animal.

Instead, Kavanagh said, it would be up to a business owner to file a complaint and have the issue heard by a court.

But Sarah Kader, attorney for the Arizona Center for Disability Law, said that presents problems of its own.

Kader said she could foresee a business owner calling the police on someone. Then the officer would issue a citation, forcing the person with the disability to find his or her way to court to answer the charges.

And if that person lacked transportation, she said, a warrant for arrest would be issued.

She also questioned whether there really is a problem.

Kader pointed out that existing Arizona law already gives businesses the right to eject any animal — including a service animal — if it misbehaves, is not housebroken, poses an undue burden’ or poses a direct threat to the health and safety of others.

Underlying all this is an Arizona law which makes it illegal for anyone who operates a public place to discriminate against people with disabilities who use service animals if what the animals do is directly related to the individual’s disability.

That includes everything from people with vision and hearing loss to balance stability, pulling a wheelchair, and sensing when someone is about to have a seizure. It also covers helping those with psychiatric and neurological disabilities by preventing or interrupting impulsive or destructive behaviors, but does not include animals purely for emotional support, comfort or companionship.

Generally speaking, service animals are dogs. But Arizona law also allows for the use of miniature horses.

Kavanagh said he has no problem with those who have a legitimate need. But he’s convinced that there are a lot more animals being brought into businesses than what the law allows.

“People complain all the time, ‘there was a dog in the coffee shop,’ ‘a woman took a dog on a plane,’” he said.

“I see it everywhere,’’ Kavanagh continued.”Everyone sees it. And it’s getting out of control.’’

The tricky part for business owners is that they legally cannot ask someone with an animal about his or her disability. Instead, they can ask only if the animal is a service animal and what tasks the animal has been trained to perform.

But they cannot demand to see any sort of special ID card.

Kavanagh said that people abuse the system. And he sees nothing wrong with requiring people to prove to a judge that their animals have been properly trained for a specific disability covered by the ADA.

“It’s amazing that you can’t get a placard to park your car in a disabled spot unless a doctor certifies that you’re disabled,’’ he said.

“But, pretty much, today everybody can walk around and buy vests (for their animals) on the internet and claim non-trained animals are service animals,’’ Kavanagh continued. “It makes no sense to me.’’

Kader said one big flaw in what Kavanagh proposes is that nothing in the law actually requires that a service animal be formally trained. She said that would subject people to who have trained their own animals for legitimate ADA-covered needs to fines.

And what of those who are using the law — and a claim of a disability — to bring Fluffy or Fido into the grocery or restaurant solely to make sure they’re not left in the car?

Kader said she remains convinced the problem, to the extent one exists, is minor.

“I think Kavanagh and others who are putting these (laws) forward are making a big deal like there’s thousands of people out there with these fraudulent service animals,’’ she said. And Kader said business owners always have that option to approach someone and asking the two permitted questions to weed out who is entitled to bring an animal in.

“There are very few people that are going to have responses to the specific questions,’’ Kader said. “Most people aren’t going to lie and make up a disability and make up what their animal is trained to do in response.’’

The bigger problem, she said, is what happens next if someone can’t produce proof of training.

“The police are going to get called if a business owner doesn’t believe them,’’ she said.

“It’s just a disaster,’’ Kader continued. “It really punishes the people with disabilities for the actions of a very few.’’

But Kavanagh said those with real disabilities should like his proposal.

“We’re going to whittle away at an abuse and, hopefully, take the heat off legitimate service animals that are trained and are helping people,’’ he said.

This isn’t the first time lawmakers have grappled with the issue.

In 2015, Rep Bob Thorpe, R-Flagstaff, proposed to have state health officials issue permits, complete with photos of owners and the dog or horse, to service animals. He insisted at the time that would actually help the disabled by ensuring they get fewer questions from business owners.

But that proved so controversial that it was killed unanimously by the House Appropriations Committee, with even Thorpe voting against his own proposal.